Painting Miniatures By Stages – A Method

I wanted to show off a bit more of the Orc Blood Bowl team but it’s still not done and I didn’t want to do just another WIP post as I’ve shown them off a couple of times now. So what I thought I’d do was show you how I’m painting them. I’m not much of a batch painter, and this method has worked for me throughout this project. You may do something like this yourself already and if that’s the case, you may as well skip on to the last photograph and see the finished project. But for those of you who are interested in how I do what I do, this is where it starts…

Not the most interesting of stages, I shall grant you. I put the muddy stuff down first (I used Blackfire Earth which is a difficult bugger to get down but leaves a lovely effect) and undercoated in black because this is going to be a dark looking miniature when finished. When you start, you may see some patches didn’t get much of the Chaos Black Spray so just touch those up with a little watered down Abaddon Black.

The entire miniature is given its base colours. There aren’t that many of them but keep it all neat. I made the skin with black and Waaagh! Flesh – after all this is a Black Orc and you want a nice dark, almost ‘Dark Angels’ sort of green. In the words of our Lord and Saviour, Duncan, you want to use two thin coats all over. And don’t get frustrated if you miss the odd bit and have to go back to a colour you’d thought you were done with – it happens to the best of us. Also, Rhinox hide has gone down on the base. 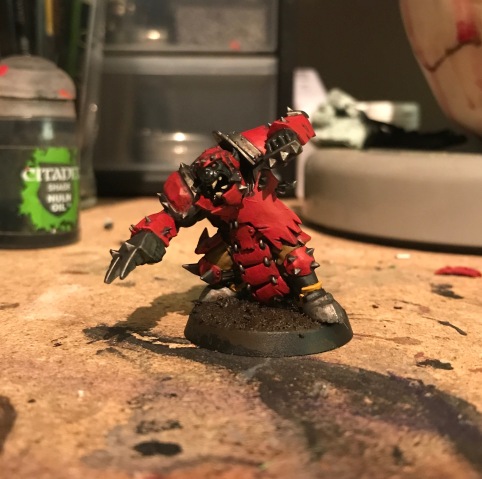 Everything gets washed aside from the red and black on this miniature. Use a complimentary shade for each different colour, such as an orange wash for the yellow  areas, or a deep green for the green areas. The silver areas, and a few gaps and cuts in the red get treated with Nuln Oil to add some real depth. In fact, this is going to add shadow and depth all over the model, which you then bring back up in… 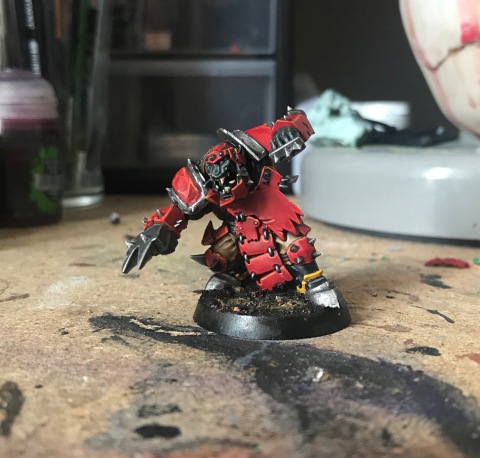 This is a bit of a long winded stage but it really does add so much to the model. With steady hands avoiding the recesses and keeping to the edges, you work with lighter colours than in the basecoating stage. For skin, you want to build up the colour over several stages for a more natural look. And for both the silver areas and the red areas, you can use a highlight and lowlight. For example, over Mephiston Red, for down facing edges use Evil Sunz Scarlet, and Fire Dragon Bright on the upward facing edges to represent light hitting them. But for many areas, you only need a single highlight colour. 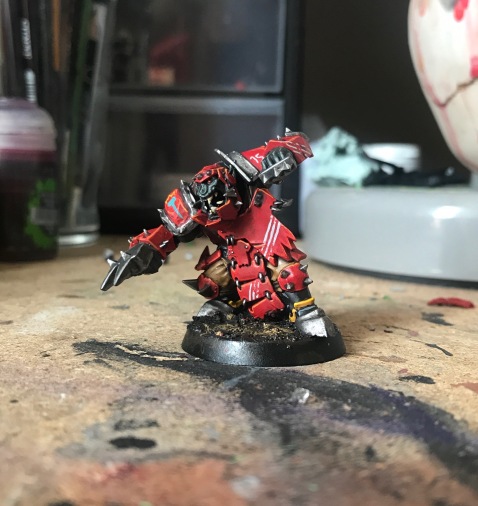 Think of this as drawing with a brush. You’re adding patterns and details that aren’t built into the sculpt. This is the little brother of true freehand painting, and on this Orc, I’ve added the ‘Orcidas’ stripes, the torch emblem on one shoulder and the number on the other. Because it’s Orcs, I don’t want to be too neat, but if you’re working on a miniature that ought to look a little more perfect, you need to practice your steady hand. I also took off some of the white by using a rough old brush with a little Mephiston Red on it. This neatly leads us on to…

Typhus Corrosion is your friend here. This is the stage where you add the mud, rust, wear and tear. A bit of rust on the bare metal is always a nice touch, and of course a bit of mud on a Blood Bowl player is very good. In fact, after taking these photos, I went back and added a little more mud (especially to the shoes) and I sponged on some black spots and ‘wear patches’ too. I also added some ‘Ardcoat to the mud to make it look wetter, and a touch to the eye as well to give it some life. 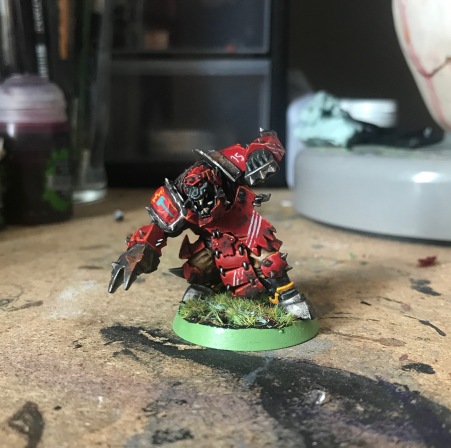 Our final stage! Clean up the base (you don’t need to go green – I’m going retro for this) and keep it neat. A subtle bit of white lining on the patchy flock that was added using a little PVA glue and a quick dip in the flock box.

And that’s your lot. I love seeing how the miniature comes together under the paint. I’m getting closer to finishing the core of the Orc team so keep a look out for that, though there are a few other little bits to add to the overall squad. But more on that later. I hope that’s given you a bit of an idea regarding how I do what I do, I also hope that it might help an aspiring painter or two. But who knows. If you have any questions, stick them below, and I will do my best to answer them. Onwards!

8 comments on “Painting Miniatures By Stages – A Method”