Know Your Necromunda – The Gangs Of The Underhive

With everyone now losing their minds over the new edition of Necromunda coming out at the end of the year (are men in their 30s still allowed to have Christmas lists? I’m asking for a friend), I thought I’d take you through the denizens of the Underhive over a couple of articles. After all, it was so long ago that the original game came out that some of you young’uns might not be so familiar with it at all. And to all my fellow old fogeys, you may well enjoy a little trip down memory lane. So, who are the gangs of Necromunda…
House Orlock

Also known as the House of Iron (because they mine iron – real original guys), these are about as close to the idea of a ‘normal’ gang as you get in Necromunda. Each one a cross between a man who dresses like John Rambo with fewer muscles, and a sheet metal worker, these guys are responsible for producing the the lion’s share of the Iron for Hive Primus. Despite having a ‘regular joe’ look, and not being afraid to double-denim, they’re plucky fighters who can hold their own with the more extreme and interesting inhabitants of the Underhive. The only beef they have in extremis is with the duster wearing Delaques due to a deal going bad and the small matter of an assassination.

They represent ‘the human element’ of Necromunda and while some would see their design as being a bit boring, they’re really there to give us a human perspective. I always thought Imperial Guard players would like this gang because, like the now-named Astra Militarum, they’re just guys. Guys with guns in a a place where everything is trying to kill them. That gets a thumbs up from me.

Nothing says ‘Necromunda’ quite like a juiced up, gym-obsessed looney who only wishes he had more arms so that he could carry more blunt instruments and loud guns. The Goliath gangers are the epitome of Underhive brutality. They really are all about drugs, muscles, mohawks and clothes designed by a blind Megadeth fan in the late 1980s. But boy are they tough. Clan Escher find them particularly distasteful and wars between the two gangs are legendary. Imagine that guy at the gym that everyone’s scared of, shot full of steroids and speed and wielding an enormous chunk of metal as weapon. That’s these guys. Subtlety is not their strong suit.

Goliath gangers are a cross between heavy metal artwork, punk hairstyles and the bad guys from more than a few Judge Dredd comics. If your game is all about brute force, and you regard manoeuvrability and stealth as being someone else’s problem, then these are the chaps for you. 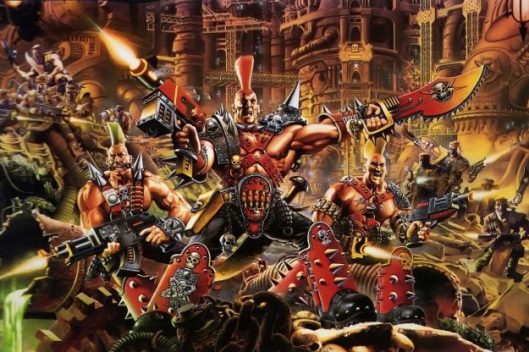 Noteable by the fact that all their gang members are female, House Escher look like that girl that you just don’t have the balls to ask out or take home because she really would eat you alive. Escher men are weak, diminutive little runts and so it’s left to these underworld Amazons to protect their territory and do the heavy lifting. They loathe the ‘Meatnecks’ of House Goliath (which is odd as I’m almost certain they listen to the same music) but they tolerate House Orlock a little better. Cruel, sadistic and haughty would perfectly describe their personalities, while cunning and speed define their tactics on the tabletop. Even with six inch serrated heels, these ladies can run rings around a lumbering Goliath.

House Escher’s gimmick was that they were female warriors and it’s sad to say that this is likely to continue. The loud hair and leopard print aside, it’s still a novelty to have girls on the tabletop (as the actress said to the bishop) in this day and age – something that will hopefully change more with time. Not having a moan, but I do wish we could have a few more female sculpts in the 41st millennium – I’m getting a little tired of painting dudes. 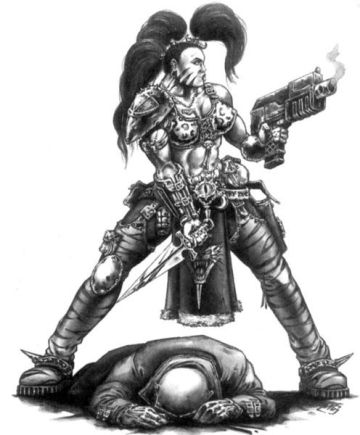 Religious nutters, mad monks, and righteous zealots all, House Cawdor is pledged to the Redemptionist faith and their faith is their shield. This cult of hooded hooligans don’t play well with others and while they don’t seem to mind the Orlocks too much, they’re usually actively trying to kill everyone else who doesn’t follow their creed. Apart from burning mutants and heretics, their only other hobby appears to be the recreation of the ‘Pilgrim’s Spire’ which was a domed tower too far above them in Hive Primus’ upper reaches. They’re obsessed with this spire and to them it represents heaven itself, which is rather sad considering their proximity to the sump.

These guys are along the lines of cartoon villains. Masked and hooded (it’s considered quite the faux pas to reveal one’s face in public within Cawdor society), they have a slight touch of Doc Doom about them, if Doc Doom had been in the Wicker Man. There’s more than a hint of hooded executioner too.

The Underhive’s gun-nuts, House Van Saar is all about the money and the murders. These guys are staggeringly rich in comparison to the other main houses of the Hive Primus’ lowest levels. How come? Because they don’t just like guns – they make them. They can take discarded Imperial Weaponry and turn it into something very special indeed, and the more illustrious houses are willing to pay top dollar for these bang sticks. Looking like sci-fi car mechanics, they’re not the most aesthetically pleasing of gangs, but they sure do know how to shoot good. And where better to test your weapons than in the city’s bowels where there are mutants to hunt and gangers to gun down. Not that they take any visible joy from it – they’re a stern, sombre and somewhat downbeat lot. 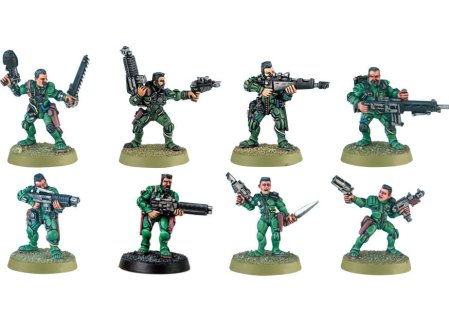 In terms of their looks, they just resemble soldiers really (which fits in as they are known to fill the ranks of Necromunda’s guard regiments from time to time) but they’re a bit boring as I look at them now. Hopefully this will change soon…

Dusters, dark glasses and bald heads. Imagine a whole gang of dudes that look like Cypher from The Matrix. House Delaque are among the deadliest assassins in the Underhive because, having dwelt in its darkest depths for so long, their eyesight is particularly sharp, even if their dress sense leaves something to be desired (though the long coats are handy for concealing weapons). Universally disliked by the other gangs (and downright loathed by the Orlocks), Delaque members do not play well with others, mainly because their stock and trade is information. Yep, these guys are spies. Snakes (as indicated by their badge) in the grass. The ruling houses of Hive Primus like to keep tabs on whats going on within the lower levels and they get all the gossip they need from the sneaky, stealthy members of this very creepy gang. And no one likes a snitch, right? 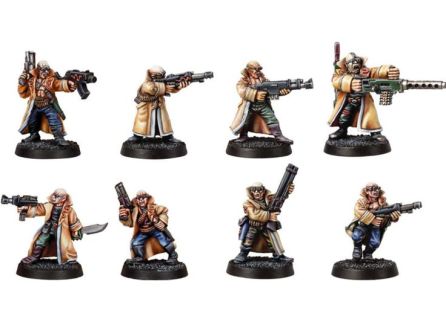 Most gang members avoid Delaque territory because even by Underhive standards it’s rather dingy, and the likelihood of getting shot is pretty high too. These snakey, sneaky bastards will kill you and tell everyone about it, so best not to trouble their doorstep. Would you let them give you an ocular pat-down?

=][=
And those are our main players. These were the original six gangs from Necromunda and back in the day, I had my own Escher, Van Saar, Cawdor and Delaque entourages. Boy, was it a fun game to play, though it got even better when the other inhabitants of these lower levels were added. In my next article on Necromunda, I’ll look at a few of the later/smaller additions, but for now, I’ll leave you to ponder which gang you’ll be bringing when Necromunda returns. Onwards…
Who was your favourite? And who are you looking forward to bringing in the new edition? Stick a comment below and let me know.

10 comments on “Know Your Necromunda – The Gangs Of The Underhive”