Know Your Necromunda: Part 2 – More Inhabitants Of The Underhive

In my last post, I covered the six main houses of Necromunda’s Underhive, but there are far more inhabitants than these illustrious gangs alone. The deeper you go, and the closer you get to the Sump, you’ll find all manner of monstrosities lurking in the darkness, while some other monsters are sent from on high to bring more light to our dingy lower levels. In this post, I’ll detail a few more inhabitants of Hive Primus’ lower levels…
Ratskins 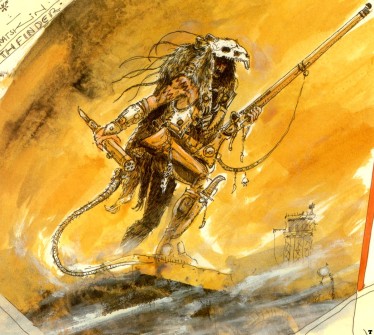 Ratskins are more of a tribe than a gang. These native inhabitants do not seek warfare or even contact with the violent gangs, and instead seek isolation within the depths of the Hive. They are peaceful and spiritual and have few qualms with anyone. However, just like in those movies where the guy who couldn’t take any more had to take one more thing, and that makes him pick up a gun, some Ratskins go Renegade (or become ‘Badskins’) and decide to take arms against (or sometimes for) the gangs. Light on their feet and light on guns (they don’t got no heavies) they use speed and aggression to win their fights. And if PETA thought 40k was lousy with animal fur, wait until the cop a load of these guys. More animal skins than you could shake a power sword at adorn their shoulders.

In a pretty blatant nod to Indian scouts (Ratskin scouts are solo characters that gangs can hire) and the whole Native American culture, these are the true natives of Necromunda who view the Hive as a God. If true, that God has some serious ≥#@€ing explaining to do. Still, I wonder how they got the skins of those rats…

100% definitely not Judge Dredd, these guys represent the sparse law enforcement available to Mega City 1 Hive Primus. These non-Judge-Dredd-looking guys occasionally have to dirty their boots by venturing down into the lower levels to serve some justice to unruly gangs, and when they do they bring the thunder. Shotguns, bolters, power mauls and even armoured personnel carriers are deployed by the law in these parts and they don’t even remotely resemble Judge Dredd. They’ve got better armour and more resources but they don’t know the hive as well as its more permanent citizens so they often find themselves being ambushed which is something that would never happen to Judge Dredd not like they look like him anyway. When these chaps show up, all the gangs take notice.

They did eventually get their own Necromunda miniatures (complete with a robo-dog) but they looked a bit naff, and so have a picture of the old 2nd Ed Judges Adeptus Arbites instead – they’re pretty much the same thing any way – they just look better. P.S. Not like this guy:

You know what’s a great idea? To go into a chemical filled cramped space under ground and set fire to everything. Well, that’s what these fellas are up to most of the time. Strongly related to House Cawdor (though Cawdor view this lot as uncommitted amateurs) they venture into the Underhive to bring the Emperor’s light to the unbelievers below. They hate mutants, they hate psykers and they generally hate anyone and everything that doesn’t follow their creed, and they do all this while being dressed in bathrobes with flame decals. One can see in them a resemblance to the members and victims of the Spanish inquisition as rendered by the likes of Francisco Goya, and this blogger would argue that they are some of the best looking miniatures to come from this iteration of Necromunda. 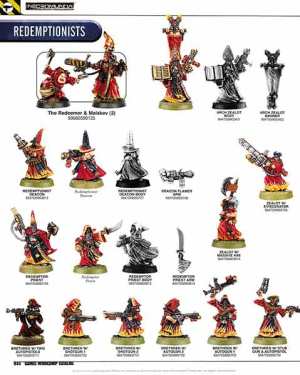 So, if you like setting fire to things and then clubbing them with a mace, these are the lads to get the job done. They’re also very handy at drumming up civil unrest throughout the hive so they’ve got that going for them too. Not the friendliest of folk though.

Wherever there are poor folk struggling, there are always some rich bastards playing a game, and Hive Primus is no different. One day, some loaded Patriarch obviously had a bright idea that went something like this; “We should send the boy into the Underhive to make him a man. We’ll spend loads of money on making an armoured suit and weapons from off-world xeno-tech and classified Ad Mech specs that even the Adeptus Astartes (and even Iron Man) would be jealous of, and throw him into the depths and see how long he survives. Should be a lark too”. And that’s how Spyrers became. From the nimble Jakara to the flying Yeld, and from the over-armoured Orrus to the assassin-like Malcadon, the Spyrers are rich kids that are sent into gang territory to survive as part of some sadistic character building exercise. Almost one-man-gangs themselves, they’re a pain to get rid of, and if a ganger does kill one, they may have to answer to the Patriarch or Matriarch of the family who has even better weaponry than the Spyrers. 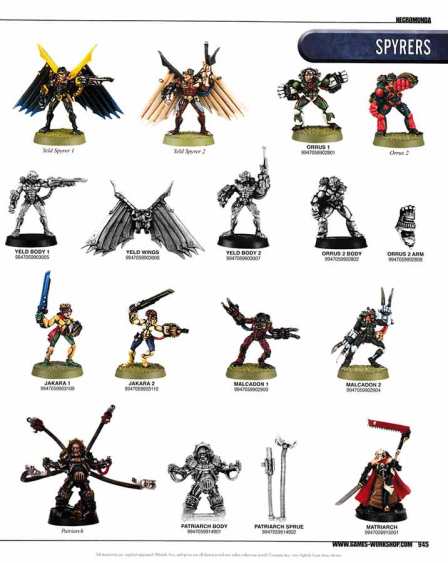 Spyrers have some of the coolest looking miniatures of the game and some very fun weapons. You don’t need many of them to take on a gang, though you do feel a little sorry for the hateful little brats when they do fall. But only a little.

This is a bit of a catch all term really and some of the things here may not fall under the ‘hired guns’ section of the original rulebook, but they all serve that purpose. There are lots of loners who end up plying their trade or scratching a living in the Underhive. From rogue bounty hunters, to wondering wyrds who use their psychic powers to protect themselves, and from beastmasters who tame the nightmarish creatures that live in the dark, to pit slaves who have nothing left to lose. And then there are the scum. Tragic cases, fools, escaped convicts and psychopaths who will fight for any house willing to pay them. It’s hard to say how many of them dwell in the depths but there seems to be an endless supply of humanity’s dregs to fill the ranks of gangs who want them.

These were always a great tool to use in more narrative driven games. Like a rogue beastmaster unleashing wave after wave of monsters, or a pyromaniac wyrd burning everything down so your gangs were constantly having to run around to avoid the flames. And the scum are a nice cheap option to have if you’re building a gang over time. 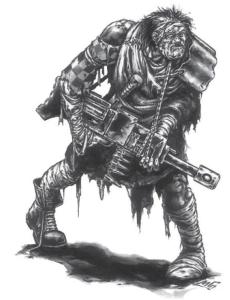 It’s fitting that we end with the Scavvies as they represent the very bottom rung of the Underhive ladder. In fact, If you got off the ladder, and dug a hole fifty feet deep beneath it, that’s about the level that the Scavvies sit at. These are the folk who have for too long been in close proximity with the toxic waste and ooze of the hive’s Sump. All mutated and in constant pain, they are the nightmare of the Imperium, the Redemptionist cult and all the juves that didn’t finish their greens before being sent to bed. From the monstrous Scalies and their harpoon guns, to the rotting corpse-like gangers and cannibalistic Ghouls, each Scavvy is a twisted visage of humanity that would shatter even the most flattering mirror. They even have scavvy dogs – packs of mutated puppers that regard ganger flesh as highly as a pedigree pooch might regard Winalot. 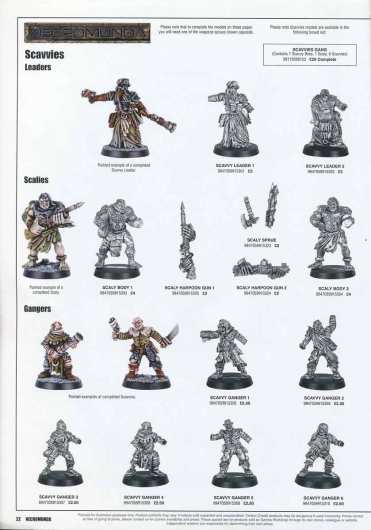 If you like random mutations and bad horror movies, then this lot will do for you. They were loads of fun to paint as I recall and could probably be used to bolster your poxwalker ranks in 40k too. Now there’s a saving.

=][=
And that’s your lot. I could have added a few more, but this about sums up the majority of the Underhive. So if you’re not looking to play as a ‘noble’ House, there are other options available to you, and plenty of variety within those. Personally I’m looking forward to seeing the return of Spyrers the most. And if Forge World don’t release them, I dare say it would be fun to kit bash one together. But for now, I shall leave you to plan and scheme on what you’ll be taking as you venture into the deep, dark places of Necromunda. Onwards!

10 comments on “Know Your Necromunda: Part 2 – More Inhabitants Of The Underhive”