He is complete! My Blood Angels Company Champion from Forge World is now done and standing on his very own shiny display stand. I even think my photography is within 90º of being up to snuff on this one too, so let’s take a look. I hope you like lots of gold and red!

As mentioned in the WIP post last week, the kit is a bit of a classic FW piece with all the usual splits and warps that you’d expect but I think I got all the visible lines sorted, which is always a plus point. I have made a couple of swaps though. Both shoulder pads are taken from the BA Sanguinary Guard kit, and the shiny helmet is taken from the BA heads kit from Forge World. Those swaps helped to make this guy a little bit more of a son of Sanguinius. The gold also helped in that respect.

There are those leg flames, and my favourite belt buckle ever – you saw all of that in the WIP. The sword was fun and I’ve fallen in and out of love with it a couple of times. What I learned is that a couple of coats of ‘ardcoat are better than one – it just evens things out enough to catch the lights just right. One thing I did change from the WIP is the knee pad with the ‘IX’. The old lettering looked a bit like it had just been scrawled on there. I made it a little smaller and added some script to the now empty space. It now looks a little more professional. Much better.

There are some really beautiful pieces in this kit and the Aquila-head backpack is one of them. Not a new feature on space marine kits, but this one really is very nice. The base is a cracker too and was lots of fun to work on, though it was a little bit of a challenge keeping it interesting – I went with a lot of grey (as is my want) and that got a touch monotonous so I had to play around with washes and the like to bring something extra to it. Also, I’m very happy with the various blood drops on this guy, including the on on that shoulder.

Ah, the checkerboard shoulder pad. Yes, I think it looks nice, but boy was I reminded why I don’t paint Lamenters. It’s such a pain on this tiny scale! I’ve done it on Dreadnoughts and Maganobz before but there you have big spaces to play with. On tiny spots like this, it was such a pain. Another thing that was a real pain was the little blood drop design on the helmet’s forehead. I still can’t tell if I got that totally right or not. Thankfully though, it’s not so bad and I think it’s one of those things that the painter notices that hopefully the viewer won’t think about twice. Unless the painter tells the viewer in a blog post like a prat. Balls.

Here are a couple more shots for you to go through… 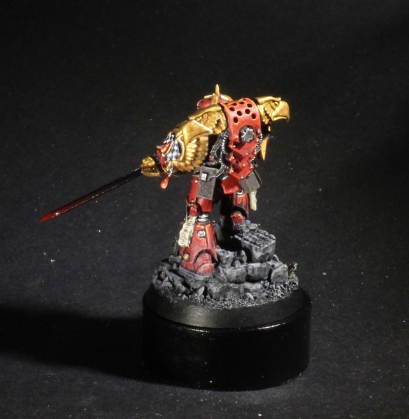 And that’s that! A second Blood Angels HQ done. Now, given that I only have one troop choice to those two HQs, I’ll have to address that soon. But in the meantime, I shall revel in the fact that I have my Forge World Open Day entry all done and ready for the show. I hope you enjoyed this post, and see you all again soon. Onwards!