Posted by johnnya10 on 30/05/2016
Posted in: My Painting and Modelling, Uncategorized. Tagged: blood angels, Forge World, WIPs. Leave a comment

Hello, dear readers! This is just a quick WIP to assure you that my paintbrushes have not been resting idly. Nor has my superglue, for I have gone straight from a big red dreadnought to a smaller, equally red Centurion – my Blood Angels company champion.

It’s yet another gorgeous kit from Forge World, although the amount of mould lines/splits on this one is bordering on alarming. A lot of filing, trimming and green stuffing went into this one, and I still didn’t quite get all of them.

It comes with one of the old small bases, but I’ve used one of the newer larger ones for this because it allows me to set a little more of a scene. The above shows the flock, barbed wire and rocks I’ve added to the base to make it a little more special. And of course, as ever, there’s a skull. I couldn’t not really, could I. Anyway, the above image now looks like…

More flames, more ‘IX’ symbols and a couple of blood drops too. I’ve done a little more subtle blending on the reds, blacks and golds which don’t necessarily come across in the above image, and just a little more weathering too. It just looks a little bit special compared to the rest of them – a little bit more shiny. Also shiny, is the blood drop emblem on the belt. I’m particularly proud of that one and I’m just hoping that the sword won’t hide it too much when the model is put together. 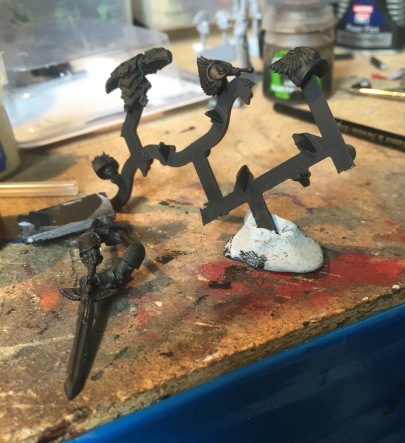 All the other bots are now ready to go. The sword was banana shaped when it came out of the clampack but a dip in boiling water and a gentle stroke got it straight again. I’ve switched out the shoulder pads and head with some blood angels specific bits (thankfully the sword is a bit angel-y anyway) to make him unique and legion appropriate. I’ve also got the stand featured in the top image undercoated and painted to make this guy competition ready. Why is that relevant?

Yup, I’m back off to the Forge World Open Day in July and I want a shiny new model to enter into the painting competition. Last year, my Mortifactors Chapter Master made it into a Forge World email and I wouldn’t mind trying to repeat that. Not saying it will, but I’m going to give it a go anyway. That’s why I’m not delving straight back into the Calth box.

Will give you an update when this chap is done – hopefully it won’t be too long now. And if you too will be heading to Warhammer World on July 17th, hopefully I will see you there, and you’ll get a chance to see this guy in the flesh. Onwards!