My Blood Angels Contemptor Dreadnought is now complete and I’m very happy with it. Atheon (as I have dubbed him) was a joy to do, and despite being the Contemptor from the Calth box, I think I managed to get him to look a little bit more dynamic than many others I have seen (despite the static stance) which is nice. Let’s take a good look, from many angles, at the first slightly-larger kit that I’ve completed for my Sons of Sanguinius.

Firstly, my love for Mephiston Red continues. It really is a glorious shade and it’s pretty cool to watch the three or four thin coats become that deep, luxurious, carmine red. And also, shout out to Evil Suns Scarlett and Fire Dragon Bright for providing the perfect highlighting colours too. But my favourite colours on this come from my home-brewed brass shades, used on the end of the multi-melta and the exhausts. It’s really just a blend of golds and silvers, but it works so well. And it really does look just like brass!

The flames on the leg (yes, I know I showed them to you in the WIP post last week) are still one of my favourite features. I feel I really got them spot on with this guy. The shoulder pad on this side though, was an unrelenting nightmare. I screwed that one up so many times, but eventually, the slightly stylised ‘IX’ and the rest worked out ok. And Forge World etched brass is as uncooperative as it ever was – nice to know some things never change.

Sorry for the darkness of this pic – was trying to ensure that the details on those wings were picked out (which they are) but in doing that, everything else had to be a little darker. The ones on the shoulder sit there perfectly, and being a tad larger than the shoulder pad surface works out nicely. I was tempted to do a bit more freehand on the power fist, but at that stage, I thought it might be overkill. There are lots of fun details all over this and squeezing in more flames or blood drops felt a little OTT. In the end, I like it. That’s what counts. 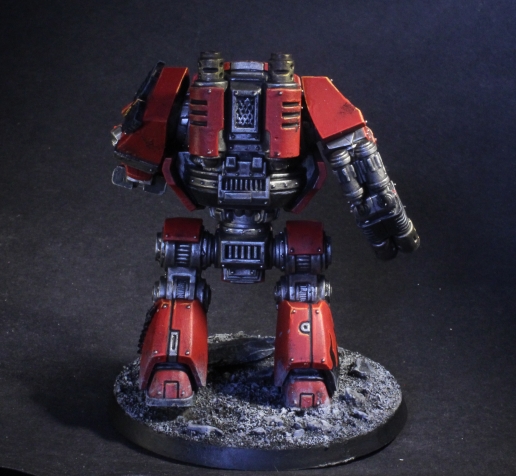 I won’t bore you too much about the back end of the dreadnought – once you’ve seen one, you’ve seen ’em all. I will talk briefly about the base though. It’s not exciting at all, and I have a reason for this. I kept it simple because I’m going to be wanting a full talon of Contemptors in the future, and I want to be able to easily match them to each other. In the same way that one bases squads the same, these guys should be similar and it may be quite a while before I get round to the next two. Because of that, I kept it simple. No bits I might run out of, or techniques I might forget in that time. Just rock. Hopefully the model looks good enough that no-one will be concentrating on the base too much anyway.

I kept the weathering very simple. Abaddon Black was sponged on where appropriate, and the feet and lower legs received a little grey fleck here and there to represent the ash-covered/moonscape look that I tend to favour. The exhausts have a little Rhinox Hide at the top to represent the exhaust fumes leaving their mark too. And that’s it. Nothing over the top there.

A word on the kit – it’s ok. It’s a plastic Contemptor, and that’s great. But the body is a mono-pose piece and that does mean you end up with something that can end up looking static. That’s where arm positioning comes into making him a little more dynamic. Take a lot of care to fit everything together perfectly, and make sure you fill in any tiny gaps and remove mould lines as ever. Wouldn’t it be great to see proper plastic Contemptor kits in stores though?

The scrollwork on the chest was fun to work on again – not done that since I put my Grey Knights Contemptor together. The scriptwriting ended up being tough and that really is a skill that I need to spend more time practicing, but it turned out well. And I left the head black, with those glaring green eyes. The black helmet indicates the warrior’s closeness to death (being that he’s stuck in a walking sarcophagus) . Don’t know where I got the idea for black armour representing death from though. 😉

And that’s about it! Very happy with the above. I seem to be saying that a lot recently, and that’s always a good thing. Not sure what I’ll be working on next, but it may have a bit more of a resin feel to it. Forge World Open Day is coming up soon (did you get your ticket?), and I want to have a new shiny toy to show off in the painting comp. But more on that in later posts. Once again, thanks for reading – Onwards!