They have heads! My first squad representing the sons of Sanguinius painted with a 2nd Ed Boxed Set twist finally have their noggins in place, and I have to say those helms are handsome. Between the Forge World upgrades and those in the BaC box, I got to create them exactly as I wanted them and I’m happy with the result. I also learned that it takes me 35 minutes to paint each helmet which, if not interesting, at least helps me manage my hobby time a little better.

The Sergeant’s upper torso has also been finished and his bald bonce is now in place too, and I’m pretty happy with how he ended up looking. between what he looks like now and what will be added to him, he’ll definitely stand out a little bit from the rest of the squad. Not only that but his base is now done too and of course, it wouldn’t be one of my bases without the trademark Yorick (or should that be Yarrick, given that it’s 40k) sitting out in front. One day I should count all the skulls I’ve added to bases just to see how high that number actually is.

So the next step has been arms and backpacks and they are taking their time. I spent an evening rummaging through the bits boxes, mixing and matching the arms and making sure I had the right amount of left-handed bolt pistols to right-handed chainswords, etc. Once I had them all together and assembled (if necessary), I glued them to some old FW flash and undercoated them (if they hadn’t already been undercoated). It makes undercoating these sort of small bits very easy and whenever I’m ready to work on the next one, I just snap one off and have at it.

I’ve kind of shot myself in the foot a little with all of this as I wasn’t a particularly quick painter anyway, but with every sword being sculpted differently, and with each one being painted slightly differently, and with all the mismatching of parts going on (which does look quite cool, if I say so myself), it’s made the process longer. I’m not much of a batch painter anyway (I do a little bit but it never seems to make anything go faster for me), but doing these in that fashion seems impossible. But enough of the whining, I have things to show you…

My first three Despoilers are done! I’m happy with these guys, but like any ‘first’ project, there are a few things that I would tweak/change if I could, and I may go back to them at the end of the project and do some quality control, but for the most part, I’m very happy. These are the stripy chainswords of the squad, rocking the hazards as it were, and the others will have different schemes. Of course better photos will be forthcoming when the job is done, but that’s three down, seven left to go.

As a complete aside, and as something that only I may find truly interesting, my usually chaotic palette has become somewhat more uniform (and dominated by red) over the last few weeks. I think it’s been so long since I painted a squad of anything that I’m just not used to seeing it like this. Anyway…

As some of you may recall, I bought a Titan a little while ago. I wrote about three blog posts about it and then stopped. Do not fear, this is still going to happen, but I learned early on with this that I have to be in the right mood to work on it. At the moment, toy soldiers are a tad more appealing to me than God Machines, but the want to crack on with it is definitely growing in me. Here’s where I got to: 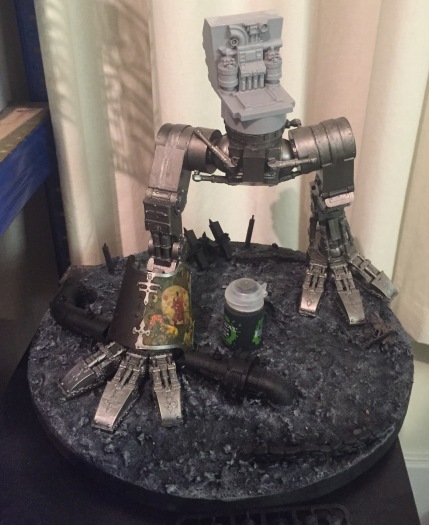 That pot of Nuln Oil (bought especially for the Titan to consume) represents the next step, but there are actually loads of next steps if I’m being honest. The base needs doing, I need to crack on with the plates, I need to get cracking on the interior… see how it can be overwhelming? I’ll get there. I may even designate a month like May to just work on this guy. It does need doing, and I am starting to get the itch again. I set it up like this so that it’s always in my mind and ideas are certainly stirring.

The Titan may take a while, but I hope to have some more news on the Blood Angels soon. Onwards!