Just to address any of you who thought I might be resting on my laurels (or my hardys for that matter) I would like to assure you that I have been hard at work, putting together and painting my very first unit from the Betrayal at Calth box – My Blood Angels Despoilers. As you can see from the above image, they’re still a way from being completed, but they’re getting there. This is also the first 10 man squad I’ve tackled in a year, and it’s been a lot of fun so far so fingers crossed I’ll enjoy them enough to keep going with the whole box!

As well as the bases, legs and torsos being done for the nine legionaries, I’m now working on my Sergeant. Other than the yellow lines on his knee needing a little straightening out, his lower half is done so hopefully he’ll be ready to join his armless, ‘eadless underlings in the next couple of days…

One thing that I’ve learned is that painting blood drops freehand is really hard. Getting the basic shape is fine, but getting the lines right – neat and symmetrical –  is exceptionally tricky and it’s something that I’ll be practicing a lot. Numerals and Hazard stripes I’m good with (like I said, the one in the above pic will be straightened up), but blood drops will require plenty more attention and study.

Here are a couple of closer up shots of the legionaries for you:

This is also my first time working on the larger bases and initially it threw me a bit. Just doing the normal rocks and sand mix didn’t seem like a good idea, so I broke up some slate and added that to that base, allowing me to give a bit of height to some of the miniatures and break up the squad a little. I’ve also done a little bit of weathering too, adding some grey flecks to their feet and lower legs to represent ash being kicked up, and using the barely-any-black-paint-on-a-sponge technique to break up the red areas.

Speaking of red, I am absolutely in love with painting red and Mephiston Red has become my favourite paint from the Citadel range by a long way. It takes 2-3 thinned coats to properly cover the black undercoat, but it looks so deep and vibrant when it’s done. Loving it. 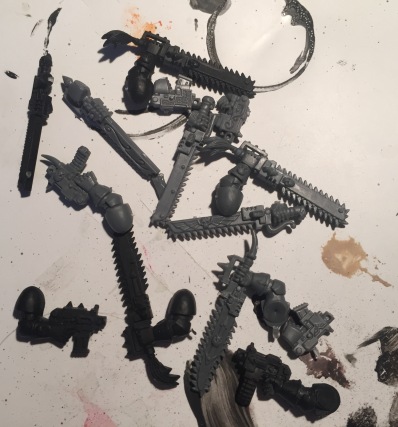 So why a Despoiler squad? Well, for two reasons. Firstly, I have a bucket load of Chainswords of various marks and looks because I never use them. From CSM to Vanguard vets, I’ve got tonnes of them and this is a great opportunity to clear out the bits box and create a cool looking unit. Secondly, it’s very Blood Angely. These guys aren’t going to waste time shooting at stuff when they can rush out of a transport and slice up their treacherous enemies.

You might have noticed a couple of Blood Angels torsos in the above images, but that’s not all. I picked up plenty of Forge World BA accessories so when these are done, you’ll see plenty of heads and shoulders (knees and toes, knees and toes) also from GW’s sister company. These guys are going to be fully decked out, though I’m not going to go overboard with the heads and torsos – using special stuff everywhere makes them a lot less special.

So there you have it. I’m working on them. If I can find some free time this weekend/next week, I shall press on with them. Of course, updates will appear here, so stay tuned.

Last week, we lost Wayne England who has provided a wealth of amazing artwork to accompany both 40k and Fantasy over the years. I urge you to check out his extensive portfolio and celebrate an artist that has helped more than many to forge the grimdark in all its glory. I shall leave you with his Great Unclean One – my favourite piece of his work. RIP.