Posted by johnnya10 on 31/07/2016
Posted in: My Painting and Modelling, Tutorials, Uncategorized. Tagged: tutorial. 3 Comments

In this month’s instalment of our basic painting tutorials for the Blood Angels tactical marine, part of a squad I’m working on, we’re going to be looking at painting the arms and bolters, and I’m also going to show you how I do the bases that I use. It’s still iPhone photography so it’s not great, but it should give you a good idea. And, just like last time, it’s important to note that this is a basic tutorial – there are no advanced techniques. It’s also all done all with brushes so everyone should be able to do it. Let’s jump in.

So I’m trying out a different way of painting these arms for this tutorial as it should look slightly better here. First of all, I clipped off the arms and cleaned them of any flash. Then I glued the bolter to the wrist, keeping the hand in line with the protruding part of the armour’s edge. Then, I dabbed a bit of superglue into the palm of the open hand and using one of the painted torsos, I put them together and held them in place. This is pretty fiddly, but what you see is what’s above. Easy to paint and keeps everything together. The last little bit of prep was to ‘drill’ the barrel which I actually did carefully with the tip of a craft knife, just enough to make an impression.

Here are the paints you’ll need:

Now, let’s jump into the painting.

I won’t spend too much time going over this as we covered all of these steps in the first part of this series. But I’ll run through the steps again.

1. 3 thin coats of Mephiston Red were applied to the relevant areas. Don’t worry if you don’t stay completely within the lines – you’ll be painting all over everything else in the next steps anyway so get the sloppiness out of your system here.

2. Paint the bolter and elbow armour with Abaddon Black.

3. Paint the bolter details and inner elbow areas and any other pipes with Leadbelcher.

4. Apply Nuln Oil all over the bolter and the areas painted silver, and in any cracks and recesses on the red parts of the armour.

6. Sponge on some Abaddon Black in moderation.

8. Edge highlight the black areas with Dawnstone. This can get a little fiddly on the bolter, so don’t worry too much if there lines are too thick – you can always touch it up with black paint again afterwards. 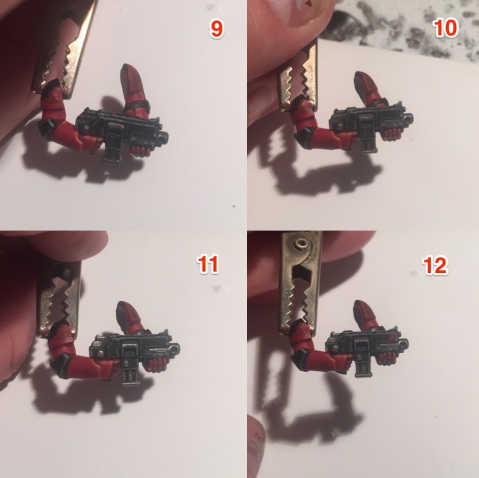 10. Highlight the underside edges of any silver parts with Leadbelcher.

12. Finally we get to something new! Now, all bolters are considered sacred, and so each should have a little personality. I’ve added a little bit of decoration to the end of each one, all based just on a red line or two. Using Mephiston Red, make a line (diagonal, horizontal, vertical – it’s up to you). A couple of thin coats and a steady hand will do it.

13. Just add a tiny bit of Evil Sunz Scarlett to the very top of the mark you just made to give it a little highlight.

Now, as this has all pretty much been a rehash of what we did in the first tutorial, I’ve decided to add the basing of this mini to this post too. I’m going to be doing the ash-covered urban look that I’ve been doing for this army, so if you want to give it a go, this is the tutorial for you. The first thing you’ll need are these:

Knackered old brushes are perfect for this work. Don’t ruin your good brushes by using them for bases. Keep the brushes you ruin through the course of your hobby painting and repurpose them for bases. Also, I talked through how I set up the bases in part 1. 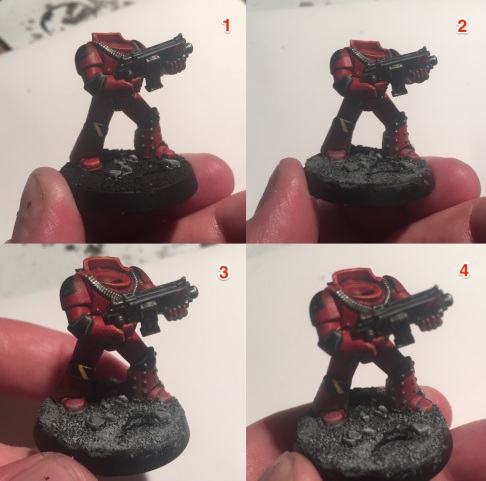 1. First of all, pick out any rocks and give them a proper coating of Dawnstone – nice and solid.

2. Now drybrush the rest of the base with Dawnstone. make sure it’s uneven – you don’t want it all uniform.

3. Now, pick out some areas and lightly drybrush Administratum Grey across the base. And with either of these grey paints, with almost none of it on the brush, dust the feet and lower legs of the space marine. This is an ash-covered world, and it helps tie the mini to the base by making it look like some of the ash has been kicked up.

4. Edge the rocks with Administratum Grey.

Now, you can leave it there, and that’ll be fine, but to give this squad a little personality, I’ve added some barbed wire to the bases that’s been trampled and covered by the ash. Here’s the quick guide on how to paint it.

5. Paint the wire with Leadbelcher.

6. Then cover it with a little Nuln Oil.

7. Once the wash has dried, use Typhus Corrosion on the lower parts of the wire – like it’s been sat in the mud a little.

8. Now, with a tiny bit of Ryza Rust on your brush, go over the areas with the Typhus Corrosion and make it look rusty. Try and get the tiniest bit on the grey around the wires too – rust has a habit of discolouring the area around it.

9. Now pick out some of the top parts of the areas with Ironbreaker and you’re almost done.

10. Finally, clean up the base edge with some Abaddon Black and you’re done. It should look like this:

It almost looks like a Space Marine now! Next time round, we’ll look at heads and shoulders, but for now, I’ve got about five more of these to do, and a special little project that I’m enjoying right now too. But more of that in the near future. See you next time. Onwards!