Has it really been a year? It seems like only yesterday that I was at the last Open Day but this weekend, I spent some time in Nottingham and enjoyed all the new minis and more of Forge World Open Day 2016. Have I got some fun pictures for you.

Nottingham remains a very pleasant city. Less than a two hour train journey from London, it’s a nice a place to be. My first port of call this time was to Ye Olde Trip To Jerusalem, England’s oldest inn. Built into the rock at the base of the castle, it’s been selling beer since 1189 and it’s a lovely place to spend some time drinking in the sunshine. There are plenty of other great bars too, and I really do recommend making a weekend of it if you attend in the future (just don’t stay in the Britannia Hotel – trust me, life’s too short). But I know you’re not here to listen to me wax lyrical about Nottingham – let’s get to Warhammer World!

Above we have the obligatory rhino photo that everyone has to take at Warhammer World. We got there just before 10am and the queue was pretty massive by that stage, but it goes down so fast there’s not really any point in joining it at that stage. The only reason to be first through the door is if you’re desperate to get your hands on something being released on the day. For example, there were only 8 Mastodons so if you wanted one, you needed to be first in line (bad luck, Henry – we now know for next time though). 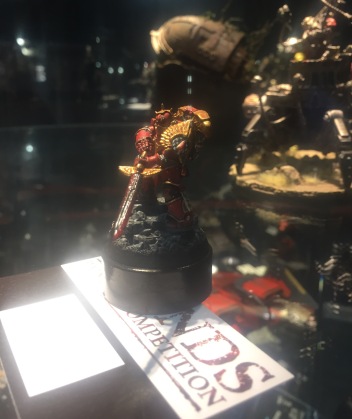 My first stop was the painting competition where I placed my Blood Angel in the display case. There seemed to be a lot more entrees this year, and the competition was a lot stiffer. Plenty of beautiful things there – here are a few of them… 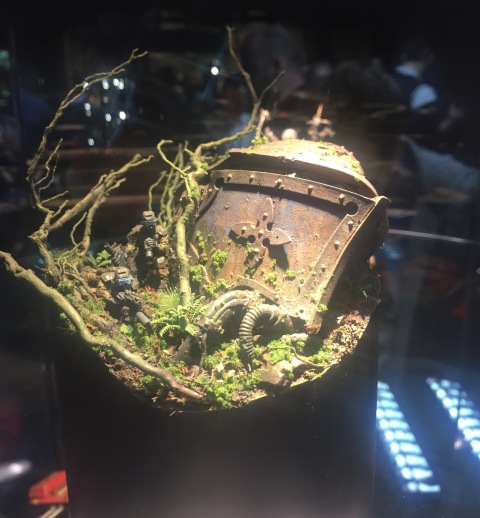 I don’t have the names to give credit, and I’d dearly like to, especially for that last one which was my pick of the competition. Stunning. The weathering, composition and painting on that titan head (and the whole diorama actually) was perfect and had I been the judge, I would have given the prize to that one. Beautiful.

Ok, ok. Let’s get to the models on preview. I’ll pick out a couple of favourites first and then do a dump of everything for you to enjoy. First off, my favourite, is the new knight. And he is a proper biggun’! 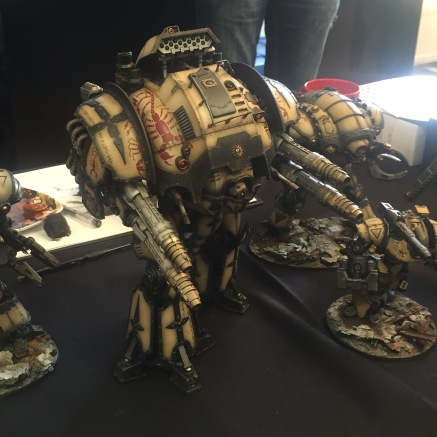 The Acastus Knight Porphyrion is a proper monster. He’s not too much off the size of a Warhound Titan and he’s improved greatly since the initial static sculpts came out. I’m a big fan of this guy, and so I snapped off a couple more shots to show off some details. My bank balance is already weeping at the thought of this guy being released.

The next one, is something that is coming out of Forge World’s Specialist Games unit and I don’t think it will be long before we see it hitting the shelves in stores. Get ready sports fans, because Blood Bowl’s back in town!

The new minis look dynamic and detailed, and I for one can’t wait to get my hands on this and pull the old Naggaroth Nightmares out of retirement. The Gouged Eye looked great too, and the double sided board is beautiful, both with the lush grass of the Empire pitches and the… slightly less lush orc pitch too.

It looks like everything’s ready, so I don’t expect it to take too long to get it out into the stores. And for those worried that this is going to be a one off, you can see what they’re working on now…

And then, when you thought the Tau had enough guns to be getting along with, Forge World have decided to up the ante even more. 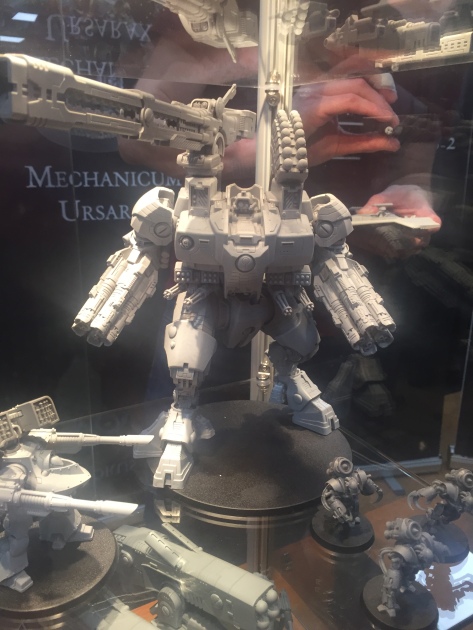 Expect these mighty missile pods and rail weapons to be raining down woe on the opponents of Tau players in the near future.

Here’s a selection of photos of other bits and pieces including new weapons, new heads, and some very big wings: 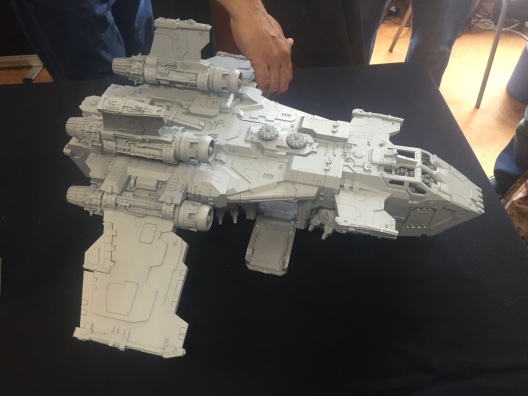 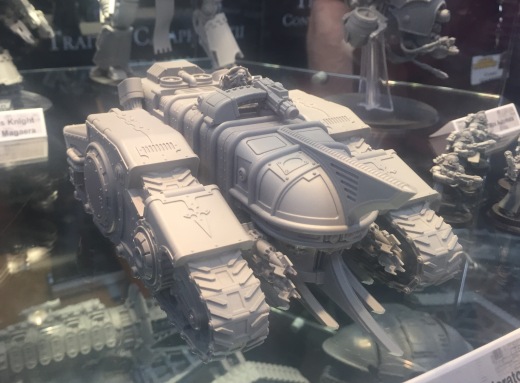 So there’s plenty for you to get excited about there. Those knight heads look really nice and if I ever go down the Questoris route, I’ll definitely be picking up one of those. Overall, it was a great look into what’s coming in the near future. Was a bit surprised to not see a Primarch there – Russ or Magnus – but I dare say they’ll appear sooner or later. One little tidbit I did get is that once Prospero is done, it will be the turn of the Angels (both Blood and Dark) and that’s really made me happy.

The rest of the day was pleasant, spent moving between queues, Bugman’s bar and a few other spots. I popped into the exhibition centre and there were a few things of note there. Firstly, I loved seeing this blast from the past: 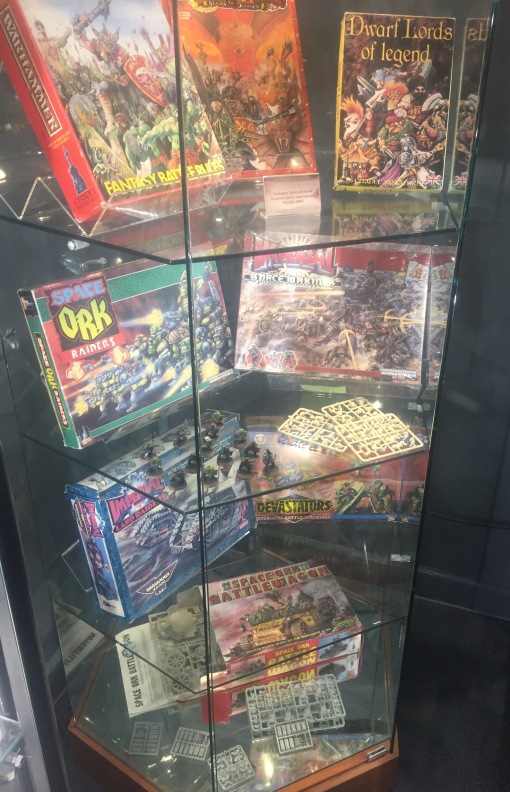 That Space Ork battlewagon at the bottom is a real old favourite of mine – great to see it in the flesh. Also, in terms of individual models, Alarielle is fantastically stunning. I didn’t know it was as big as it is, and I was blown away by the sculpt. One of the most beautiful things GW has ever made.

Sorry for the photo quality – those glass cabinets are not a friend of cameras – but I had to show it off. Fantastic. And speaking of Age of Sigmar, there were some great new displays in the exhibition centre. Breathtaking stuff…

That bottom one is the silver tower. I was going to leave this image out because of the crazy lighting, but then I realised it’s actually quite fitting given the mystique of the Gaunt Summoner’s palace. Excellent looking pieces.

There’s also a new Tau vs Ad Mech board and there are some great pieces to pick out, including the enormous Manta, and a battlesuit trying to kill titan. Seriously cool stuff. 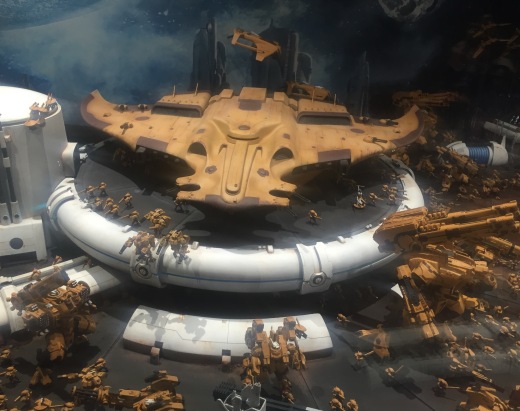 And so that was the day! I suffered my yearly dose of disappointment by not winning the titan raffle, which was made worse this year because it was a Warlord Titan (it’s usually a Reaver). Bugman’s remains a pleasant place to be, and there was some really cool terrain on display too. The titan battle was going on as well which is always a good laugh.

We left around 3pm and headed home, our credit cards slightly melted, and our heads filled with inspiration. It was a fun day, and I’ve got a few things to remember the day by… 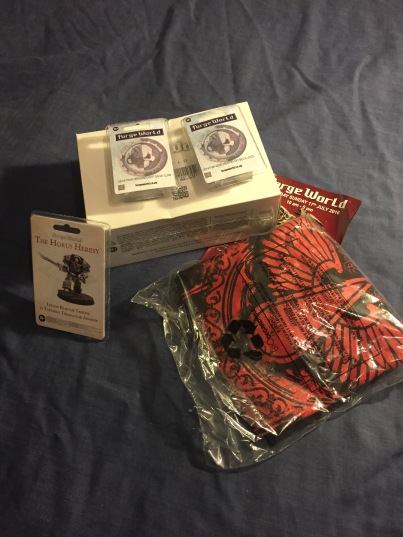 I look forward to the next Forge World open day, and hopefully by then, there’ll be a few Blood Angel bits for me to splurge on. But until then, I shall get back to that Calth box and dream a little of what will come. Onwards.