Posted by johnnya10 on 22/06/2016
Posted in: Silliness and Stuff, Thoughts and Comment, Uncategorized. 4 Comments 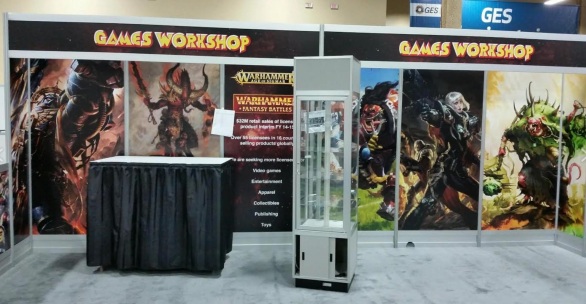 Much has been made of Games Workshop appearing at the Las Vegas Licensing Fair this week. They’ve got a fairly sizeable booth there as they look for more people to take advantage of the rich and varied universes that they’ve created, from the Grimdark® of the 41st Millennium to the fantastical settings of WFB and AoS. As many readers of this blog will know, I do enjoy doing a bit of wishlisting from time to time. And today, I carry on that tradition by listing what I wish would happen to some of the GW products. Ranging from the ridiculous to the sublime (and there is certainly a healthy mixture of both here) I have plenty of ideas that will hopefully prompt several ‘hmmm’s, a few ‘ooooh’s and even the occasional ‘what the hell are you talking about’.

Were I ruler of the world, this is what I’d demand… 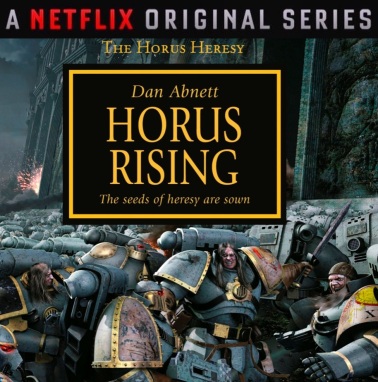 Now, some will want films, but I think, given the amount of story, and the amount of characters, and the amount of thrilling moments and cliffhangers, each book getting 8 one hour episodes sounds way more fun to me. Start off with the Horus trilogy, then do Fulgrim, Flight of the Eisenstein, Prospero Burns… one a year would be amazing and it’s not so outlandish an idea now. With the success of Game of Thrones, TV companies won’t have too many qualms about trying a bit more Sci Fi and Fantasy now. What’s more, companies like Netflix and Amazon are throwing money at these sorts of series now. Why not? Even if we just got the opening Horus trilogy from it, that would be spaghetti and Amazeballs. 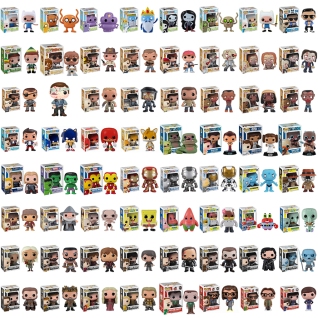 I’ve never really understood the popularity of these things, but obviously a lot of people do. And given some of the truly obscure films, comics, games and television programs that have their characters cast as bizarre, static little collectable dolls, there’s no reason why 40k can’t have them. Not only will the Vinyl Pop hardcore pick them up (because they have to have every one of them from what I hear), but plenty of 40k fans would shell out for them too. Imagine having a cute little space marine doll and a cute little ork doll on your shelves… well, some people might like that. 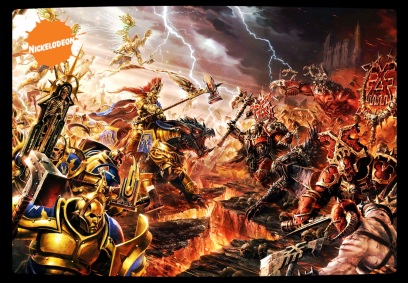 Now, I grew up in the true golden age of Saturday morning cartoons (when they were really just extended toy adverts). He-Man, Thundercats, M.A.S.K., Jace and the Wheeled Warriors, Visionaries, Dinoriders, Lone Star… it was a pretty awesome time and I had toys from nearly all of those series and plenty of others too. I think ‘Sigmarites: Warriors of the Realms’ would go down a treat with the kids. Then when they grow up, they can start buying all the minis and that, ladies and gents, is how you ‘hook ‘em young’ as the saying goes. And I’m sure they can handle all the gore. Kids love that stuff.

I’m not a huge fan of replica weapons myself, but I know a lot of people are. A cursory Google search will uncover Lord of the Rings replica swords going for around £250. Heck, you can get lightsabers for that and they’re mostly just a long tube! How much would people pay for a chainsword or bolter? And I have to admit, I may be willing to pop my replica weapons cherry if it means I can get my hands on Space Marine power axe. 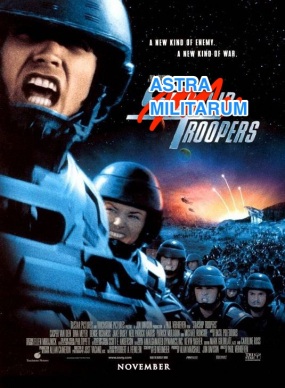 Ok, here’s the plot. A tyranid spore mine hits a major city on a hive world in the Imperium. The Imperial sector fleet moves to engage the hive fleet and we follow the lives of three or four young troopers who head in different paths -one is an Imperial navy pilot, a couple go into the Imperial Guard and one goes into the Inquisition and eventually becomes an Ordo Xenos Inquisitor… oh, you recognise this film? Yeah. So do I. So do I. The rumour always was that Starship Troopers was originally meant to be set in the 41st Millennium and whether that’s true or not, that doesn’t mean I wouldn’t want to see this film. Bring my popcorn! 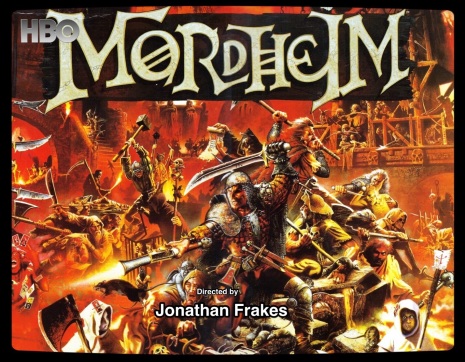 Again, if people love things like Game of Thrones and Peaky Blinders, why not smoosh them together with a healthy dose of the Old World and create a dark, gory, bloody and claustrophobic TV series full of warring gangs, undead, daemons and man-sized rats? I’d watch that! 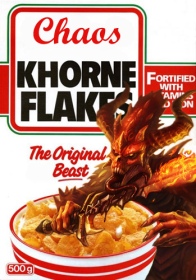 Now we’ve all seen the Khorne Flakes image above, and that’s certainly one way to go. Any GW themed cereal would be better than many of the more boring breakfast options out there. Fruit Lootas, Fleet-os, Causes Fear-ios… the potential is there! And I’d bet those sneaky guys over at Privateer Press are already working on WeetaCryx. 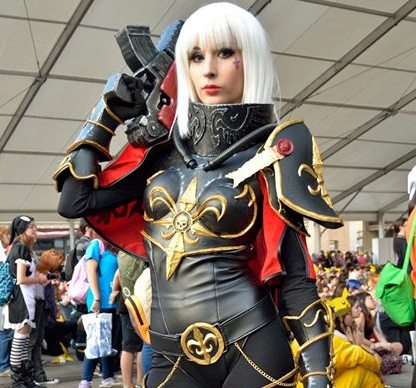 I have no idea who this is. If you know, tell me so I can give her some credit for an awesome costume. And my phone number. 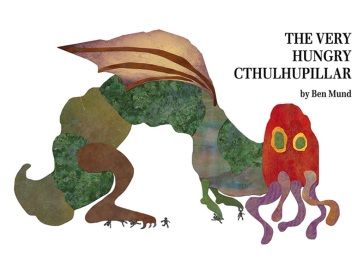 This sound ridiculous, but you can already get a The Very Hungry Cthulupillar book, so why not? As a jokey sort of Christmas gift that wargamers could give each other, I think it would work. And there’s nothing wrong with using this to teach your own little brood to consume everything around them so that they can one day become big, strong Tyranid Warriors (yes, I know that’s not how it actually works, but then finishing your brocolli never made anyone big and strong either). 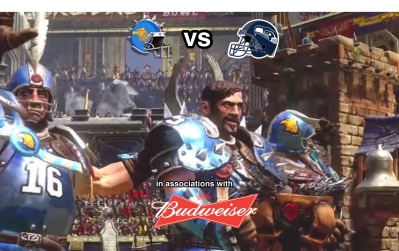 Well, if London does get its own NFL team (and it has been angling to do so for a while now), why not make them the Reavers? Proud in their blue and white. They can even add a bit of red with all that blood. All we need to do next is convince the government to allow scientists to create Morg n Thorg in a lab and the Superbowl trophy will be in the UK within 5 years. Oh, and I’m sure we can get the league to add some spikes to the ball, right?

Ok, so a few of those were pretty silly and what we’re really likely to get from GW’s turn on the Las Vegas strip is probably a few more computer games (and some $10 dollar bills stuffed into Jervis Johnson’s waistband), but you never know. The chaps in Nottingham have built up a strong IP over the years and there’s no reason why others can’t use it to push the 41st Millennium and other settings in a few new directions. Here’s hoping those new directions do a bit for enriching the hobby too.
What licensing and merchandising would you like to see from GW? Anything I missed?

4 comments on “Games Workshop Licensing – The Opportunities Are Everywhere!”