In Defence of: The Other Heldrake

Posted by johnnya10 on 10/01/2014
Posted in: In Defence Of. Tagged: Chaos Space Marines, Heldrake. Leave a comment 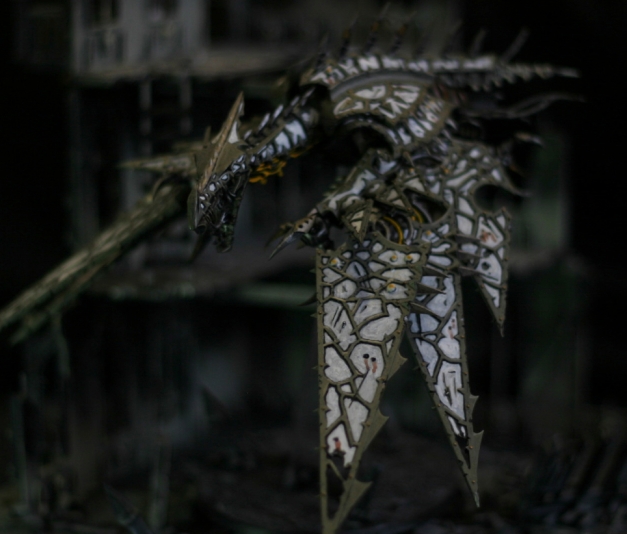 I feel sorry for those Warpsmiths, toiling away in the Empyrean aboard hulks and battle cruisers, making mechanical monsters for the fallen legions. Hey, it’s what they love, but the reason that I feel sorry for them is because half of their creations are immediately discarded by the lords and generals that rely on their skills. For all those Heldrakes fitted with Baleflamers, there are as many with Hades Autocannons, and none of them seem to get any time away from the warp.

In the age of flyers, it’s a fair argument that the roost is appropriately ruled by the ‘Hell Turkey’ but the variant that you see on the table top tends to be the one with the Baleflamer. However, I would like to raise the profile of the ‘drakes equipped with Hades Autocannons. Because I use one, and I think it’s awesome.

I suppose it’s fair to say that the Hades Autocannon Heldrake is not actually a bad choice. It’s still got AV12 on all but its tail and it still has a 360º arc of fire. It’s just that, if you want the most bang for your buck, you take the flamer. That’s because, if you want to waste opposition troops, a template weapon with torrent and soul blaze is pretty hard to turn down. The Baleflamer is so Emperor-darn good at the job it does that it’s hard to see past it. But I use my Heldrake as a hunter that targets special characters and especially armour. And it does a great job.

I’m of the opinion that you can never have enough S8 shots, especially when they’re strapped to a very fast-moving unit that can also perform an S7 Vector Strike. Run it over a tank and see the damage it does. Here are a couple of games where it has done me proud.

Imperial Guard artillery is a real pain. Those big guns that never tire can get very tiresome when you keep seeing blast markers covering your troops. What’s more, in many games you have to wade through what feels like a thousand grunts to even get close to them. Well, I was playing a game against a classic Guard army full of big bangs and big blobs.

My drake appears in the 2nd turn thanks to a good reserves roll and sets off for the heavy stuff in the backfield at a race. Before it reaches the two Basilisks that are already proving a nuisance, it pops a Chimera and that in turn wastes a fair few of the troops inside. Its jink save keeps it in flight over the next turn before it cuts across the field and hammers one of those tanks to pieces. Yes, my rolling was particularly good but it was brilliant to see it. Two tanks in two turns reduced to smouldering wrecks.

The Heldrake continued to smash and blast his way through the game and dodged every shot that targeted it. I happily romped to victory and smiled all the way home.

I didn’t fair so well in this game. In fact, I lost pretty badly, but my tactics were at fault for that. I used my small numbers of daemon allies pretty badly and I spent far too much time shooting at the big stuff while almost ignoring some large lumps of fire warriors that ultimately wiped out nearly all of my infantry (so many shots!).

However, I did smash a Riptide into pieces in a couple of turns which was impressive enough. Ok, so a Landraider and a Defiler had to contribute quite heavily, and yes, some good dice-rolling came into it again, but it was the ‘drake that got the kill. And he survived the game too (though he was pretty much the only thing of mine that did).

Now, for the sake of full disclosure, I’ll admit that I’ve taken the Baleflamer several times and, yes, it’s pretty amazing. It’s eaten Eldar Guardians and Ork Boyz alike and been a lot of fun. But that should not discount the Hades Autocannon. If you need a good anti-tank unit, it really is a viable option that can mess up your enemy. And when your opponents see a drake, they expect the flamer so it can be a good shock tactic to spring the cannon on them.

It’s all in how you use it. The Baleflamer’s huge range, high strength and template mean that you don’t really need any actual tactics to use it. As long as you can see your opponent, you can nail them with it. Job done. With the Hades, you need a very clear game plan. Identify the targets you want to focus on straight away. Use it to deal with big things, especially those that fire large blasts (because those can’t target the drake at all). Know it’s role, even before your reserves roll.

I don’t know if this unit needs a defence, or if that load of drivel was an adequate one, but I will continue to take my ‘cannondrake’ because it fits my tactics and it hasn’t really let me down. Until it does, it makes the cut.