My House, My House Rules.

House rules are an odd thing when you think about it. We’ve been give 200 pages of core rules, 100 page codices, supplements up the wazoo, and yet we still feel the need to add more caveats, edicts, dictates and stipulations. I know very people who don’t have at least one rule that they add to their games.

It varies from player to player and club to club of course. While some will ignore entire USRs, others will make the most subtle of changes. Some will ban certain types of units or unit types, modify certain saves and even entire armies can be banned. While some others may choose just to change the way objectives or terrain are placed.

Personally, I don’t have any actual game-specific house rules. I consider myself to be still learning the game (ever the student) and so I don’t like to over-complicate things. However, I do have some rules for visitors to my board that I consider to be important to my enjoyment of the game and that I hope will improve their level of enjoyment too. Here’s a run down of those rules:

Games can go on, and on, and as enjoyable as it is to be playing, in order to maintain that enjoyment, I like to take breaks. After both players have finished turn one, take a 5-10 minute rest. Stretch your legs, smoke a cigarette, check your emails… it keeps you focussed during the game and gives your overworked brain a rest.

Only painted models on the table please. The exception to this is if I’m helping to teach you the game and you’re still new to it all. But once you’re settled into it, you should be painting up all your minis. I don’t require a Rembrandt level of quality (because if I did, most of my minis would be out too), but something. The minimum three colours thing is acceptable but the better the paint jobs, the more I enjoy the game.

3. Looking up rules is a team effort. 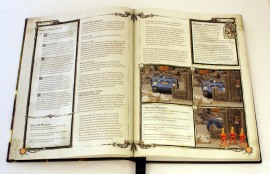 As mentioned, and as we all know, there are plenty of rules in this game. There’s no shame in getting stuck on one. But if either I or my opponent get stuck on something, it’s only right that both people help out in looking up the answer in the BRB or the Codex. There’s no tactical advantage in being a douche and not helping out. And if you can’t find it, do as it says in the book and just roll a die to resolve it.

If you’re planning on playing a special game type, whether it be planetary strike or cities of death, or stronghold assault or anything else, let your opponent know. It’s pretty pointless them turning up with a list that can’t win, so give them an equal chance. And if it’s someone’s very first time playing this sort of game, be generous and treat it as the friendliest of friendlies.

I have no issues with anyone using FW models and, as long as we have access to the relevant rules and it’s not an obviously Apocalypse unit (and I treat Escalation as a special game type – see rule 4.), I care not. Besides, nearly all of their minis look fantastic, and that helps me enjoy the game too.

6. The winner buys the loser a drink.

That way everybody wins. It’s important to remember the social element to this game and there’s nothing I like more than a post-battle natter over a coffee or beer. But the winner should buy – it’s just good sportsmanship.

And that’s pretty much it. It’s more about sportsmanship and being a fun opponent to play against than altering rules. I like to think that I do my utmost to be someone who my opponents would like to play again – what’s the point in being a bit of a tool and losing out on games.

So what I really want to know is, what are your house rules? Do you have any of your own? And have you come across any really strange ones?