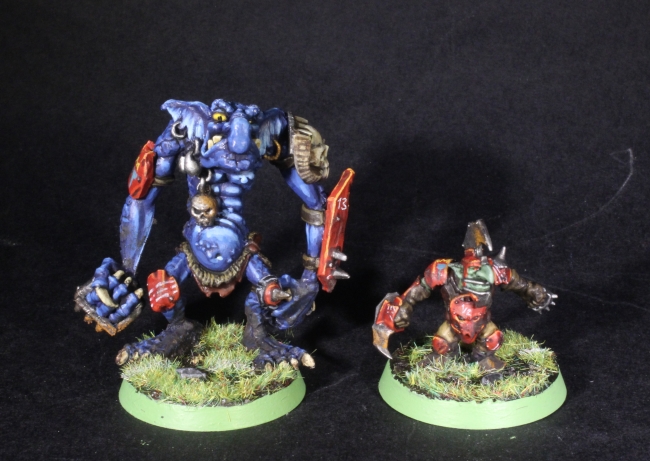 You can never stop at just the boxed squad, right? Well, I’ve added to my Orc Blood Bowl Team, Da Mighty Redz, in the form of my new Troll and Goblin. The little and large duo move me a little closer to completing the project with plenty of time to spare before Necromunda hits in November, and I’m quite happy with how they both turned out.

The keen-eyed amongst you will notice that this is not the official Blood Bowl troll, but a Stone Troll (Sorry, ‘Rockgut Troggoth’ for those of you who speak Sigmarese) that’s been slightly converted and that’s because I’m not the greatest fan of the new Blood Bowl troll. While it’s of course a quality sculpt (what isn’t from GW these days, right?), I like my trolls to look like big, grumpy and fairly immobile brick walls, and not someone throwing out the first pitch at a Yankee’s game. Less dynamic, more static – which pretty much goes against my entire miniature design philosophy but I guess this is the exception that proves the rule.

So, I chopped off his bone-club (poor chap – sounds painful), and made a knuckleduster from some plasticard, green stuff and the spikes are actually from a Storm Raven’s missile launcher. I made some knee pads from green stuff, plasticard and green stuff made me the arm guards, and the shoulder pad is from the Chaos Terminator kit. There are a few green stuff leather straps and I had to hack off and rebuild half an ear to make room for the aforementioned shoulder pad. Oh, and he has a backplate that has been nailed into him because he’s a troll and he doesn’t mind that.

The goblin was a tricky little bugger to paint. He didn’t take too long (I actually painted him in about 5 hours!) but it can be tricky to switch gears when you’ve been working on something as big as a troll. But that’s a super fun kit and I’m almost certainly going to be adding another gobbo in the near future. Not only because it was enjoyable to paint, but also because it’s pretty risky bringing a single goblin to a Blood Bowl game. They either get squished or the troll eats them so better safe than sorry.

And as you can see from the above snap, these guys are called Murvy and Owni which is my tribute to two Liverpool stars of my younger years – Danny Murphy and Michael Owen. Not exactly dead ringers, but Murphy does have a slightly troll like demeanour (and attitude) and Owen was (and still is) a bit short, so it kind of fits.

In terms of tactics, the goblin is there to pick up the ball (because having played with Orcs, they’re practically incapable of this when you need them to) and the troll can throw him up the field to score me a touch down. Not particularly intricate tactics, but they’re a well used staple of the game. Looking forward to trying it out. 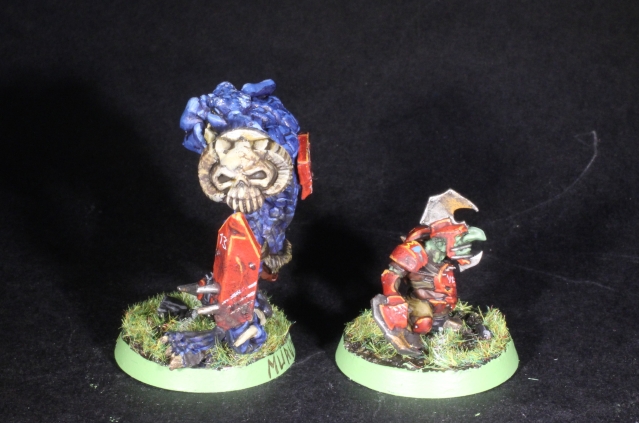 I just like this picture because it’s like they’re standing back to back with the Goblin saying something like “See, I’m definitely gettin’ taller!”. 😀 But it also shows off a bit more of the troll armour, and I love the look of the Goblin in profile – those helmets are awesome.

That’s your lot for this post. Well, except to say that the desk project has been delayed by just a couple of days while the last couple of stragglers get back to me. Early next week. I promise. Have a great Friday, a cracking weekend, and the very best of luck with all of your painting projects. Onwards!