I figured, as I’ve been banging on about the Desk Project that I’m doing at the moment rather a lot recently, I’d do something fun and silly for this Friday. So, to give you a couple of minutes of hopefully Orkish giggles at the end of a long week, I give you the Ork name generator. Now, long ago, I did the Ork clan name generator and it was a lot of fun. But I wanted to test myself (and particularly my Orkish vocabulary) by making a generator that can help you come up with the name of an Ork character, boss or boy. So here you go: 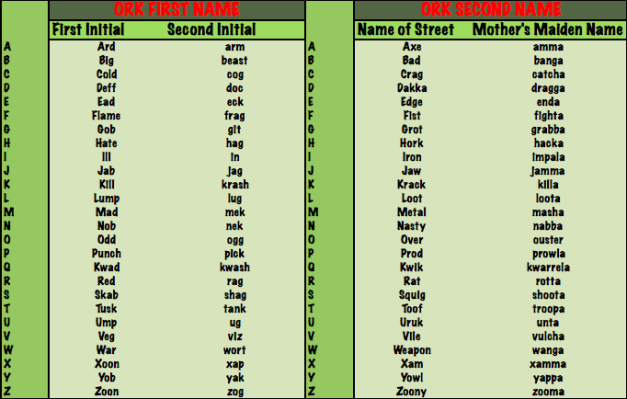 As you can probably tell, it works pretty simply. Your first initial and second initial make up your Ork’s forename, and the first letter of your street name and mother’s maiden name will give you the Ork’s surname. Well, I don’t think it’s really a surname – more of an dis-honorific. A nickname… whatever it is, this is how it works. So my name would be Jabarm Squigtroopa. If your name was Rob Stevens and you lived on Jones St, and your mother’s maiden name was Howard, your Ork name would be Redshag Jawhacka. Get it?

Well, you know the drill. Have a go, leave a comment below and tell me what you think of it. Did you like what you got, can you think of improvements, or do you now wish you were called something else? Either way, I hope it gives you a brief moment of Orky goodness after a hard week – you’ve earned your teef, and a good weekend to be sure.

And one final word about the desks project; I’ve started to build the page! It’s coming along great and we’ve had more submissions than I was expecting. Provided I can get everything organised by next week, it should be going up then, so keep an eye on the blog for that update. Onwards!