Posted by johnnya10 on 06/02/2017
Posted in: My Painting and Modelling, Uncategorized. Tagged: spartan, WIPs. 6 Comments 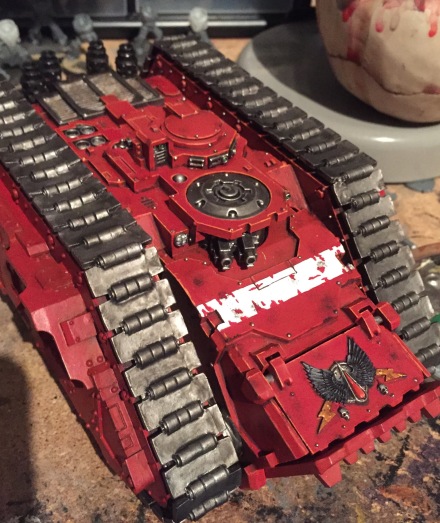 Just a quick update for you on where I’m at with the Spartan which is, in truth, not a lot further, but I do now have the top of the tank done. Which, by the way, is no mean feat. There are a billion and one edges to highlight up there and that takes its time. The white stripe was pretty nerve racking too – now if anything has ever required a steady hand, it’s that, but it’s turned out looking alight. Didn’t go overboard with the paint chipping either, and yet it still looks busy. Nice.

Annoyingly, I’ve just realised that these pictures were taken before I finished working on the ramp, and the inside, which are also now done. I can’t be bothered to put too much love into the innards of this tanks as you can’t really see into them, and I’ve done enough so that they look decent. That’ll do for those, though the ramp looks a lot nicer – you’ll see some shots of that in the future.

I’ve also done the beast of an engine stack at the back there, which was fiddly as hell, but it’s turned out looking alright.More weathering has gone into this since the images were taken too – I really must get better coordinated when taking these images. The above images makes the colours look a little flat, but there’s a bit more definition in there which will come out when I take the glamour shots of the finished tank. And yes, those are orange indicator lights at the back. Safety first. 😉

And finally, here’s a top down view from the rear, so that you can see all of that lovely edge highlighting that in no way took bloody ages and certainly didn’t drive me near insane.

It’s getting there, but it is taking some time. Next up will be the sides, then the tracks, and finally the guns which I’ll paint separately and stick on afterwards. After that, I final bit of weathering. I’m also going to see if I think I can add any more blood drop symbols or ‘IX’ markings anywhere – don’t want to overdo it with those, so we’ll see.

Anyway, that’s how far I’ve come. Just wanted to reassure you that I am working on it, albeit slowly. I might sneak in another WIP before it’s completed but we’ll see how it progresses. I hope your own projects are moving ahead at a faster pace than mine. Onwards!