Posted by johnnya10 on 18/01/2017
Posted in: My Painting and Modelling, Uncategorized. Tagged: blood angels, Rhino. 6 Comments

How’s that for a quick turnaround, eh? My second Blood Angels Deimos Rhino in as many weeks! Done, and looking dusty in record time, I now have to try and make this blog post interesting seeing as I just wrote a post about a very similar tank last week. Let’s see how that goes.

As with the last post, I can say that the kit looks great, and is a little tricky to assemble if you don’t read the instructions. It is a joy to look at when finished though, and while the GW variant is a classic, this Forge World version just looks so cool. Classic styling with modern design aesthetics – very nice. 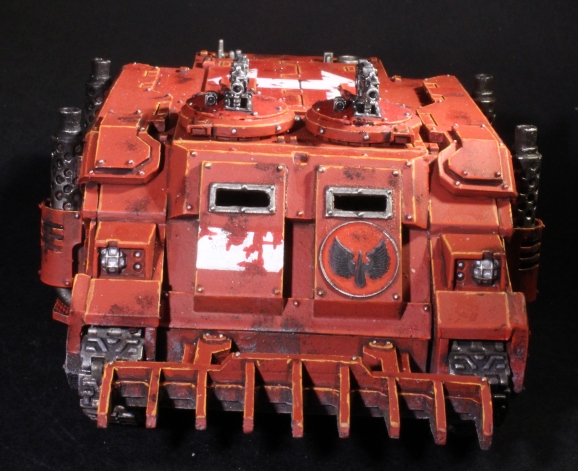 So, yeah, it’s the front of a rhino again. I suppose the weathering is a little different, and the missing paint on the white stripe is also a little different… yeah, it’s a little different. Oh, yes, and there isn’t a flamer on this one. I almost forgot that. This tank sticks to the combi bolters. This was done because I thought it was only right because one ought to have a pure, basic variant. Also, Forge World doesn’t give you enough hatches in the pintle mounted weapons set to allow you to do too many of these – the one minor drawback of a great little upgrade kit. 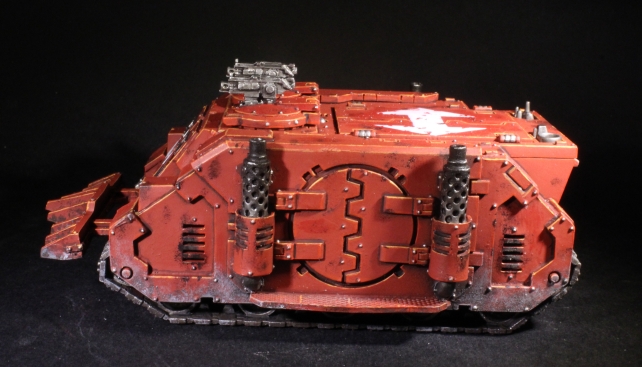 The weathering was fun to do, again. Beaten up brushes, sponges, blacks, greys and Typhus Corrosion in generous but subtle amounts. Also, again I’d like to give a shout out to Mephiston Red spray – such a wonderful product. Were I to do it again though, I might not cover the silver parts with it. A bit of masking tape might mean a single coat of silver rather than a couple. I could knock these out even faster!

And (again – sorry about all the repetition) there are some tactical arrows on the roof to go along with the unit that will be riding around in this thing. And, that’s about it. For all other details, rather than repeat myself, please see the post about the first rhino from last week. But, as a treat, here are a couple of snaps of both APCs together.

That’s me done with Rhinos for a little while at least. Bigger fish to fry. Well, one bigger fish anyway. That has taken up a lot of liquid green stuff – but more about that later. In the meantime, I hope you’re enjoying the Gathering Storm as much as I am (you have no idea how much I want to talk about it but I’m going to wait so as to not give away spoilers). Lots to look forward to there. More on that, and my Blood Angels in the upcoming posts. Onwards!