Genestealer Cult – What it was, what it could be…

Unless you’ve been living under a rock, or been a guest at the Holy Inquisition’s pleasure for the last couple of weeks, you’ll know that we’re going to get our first boxed game of the year for 40k very soon in the form of Deathwatch: Overkill. This beautiful set contains not only a dozen or so Death Watch Space Marines hailing from various chapters, but also the Genestealer Cult. As someone who’s just about old enough to remember when seeing these gangs of mutant aliens on the battle field wasn’t an uncommon occurrence, I thought I’d take some time today to reminisce and look forward. What were the Genestealer cults, and what could they offer the 41st millennium of 7th Edition and beyond?

The Hay Day of the Genestealer Cult was back in the late Rogue Trader/Early 2nd Ed times when they could be quite a force to be reckoned with (especially when accompanied by Zoats, Tyranids and Hunters). They came from the idea that small numbers of genestealers would infiltrate hiveworlds, descend to the shadowy underhive, and breed with the local population of humans, forming a cult of hybrids. When the Tyranid hivefleet landed, the citizens would find themselves fighting enemies without and within. The idea still exists today but we just haven’t had anything to represent it in quite a while.

The imposing Patriarch was the real monster back then, and the Magus was a real pain to get off the table too. These guys were surrounded by hordes of hybrids, brood brothers and even a few Purestrains too. My personal favourites were the Familiars. I had some of these as they used to come in the blister pack containing the running Patriarch and that was one of my first buys. They were so sweet! Like little baby ‘stealers! Adorable and abominable all at once.

A couple of really impressive and famous (within the hobby of course) pieces of artwork appeared featuring the Genestealer Cult in those old days too, including a classic John Blanche illustration (above), and the ‘pointing Magus’ image (the illustrator of which I can’t be sure of – anyone?) which has been used a lot over the last couple of weeks to illustrate how cool the new coming of the cult will be, and what inspired it. 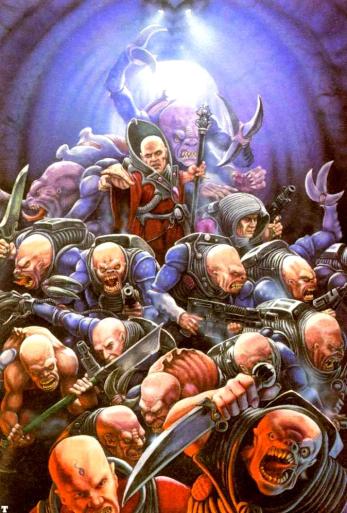 Hybrids themselves even got their own Space Hulk expansion in 1990, simply named ‘Genestealer’ which also came with five Librarians to battle (and you thought the Librarius Conclave was a new thing). They always seemed to me to be a popular set of models, but GW obviously didn’t agree.

When the first Tyranid codex hit, the cult was left behind. Hybrids and Patriarchs were replaced by the first of the big bugs and though the core books of 2nd Ed allowed you to carry on to an extent, by the time 3rd came around, the cult slunk back into the shadows, waiting for their opportunity to reappear, not knowing if it ever would… 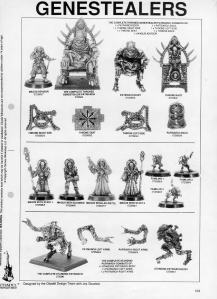 So why the downfall? Well, for one thing, GW was already looking to make 40k a bigger game. Go and look at the sizes of armies from RT/2nd Ed and compare them to 3rd/4th. Often the same points wouldn’t even get you half of the miniatures. My guess is that at the time, Genestealer Cult miniatures weren’t selling so well, and GW knew that fleshing out other armies was simply better for the game. But the Genestealer Cult had something else going against them – they were borrowers.

No, I’m not talking about the little people that live in the kitchen dresser. You see, back in the olden days, there was a lot of borrowing from each army. Guardsmen could take Land Raiders, Orks could shoot bolters, Eldar had chainswords (and not just the scorpion kind)… there was a lot of sharing due to necessity – GW was not the huge behemoth that it is now. Game and Mini designers only had a certain amount of time and inspiration and their teams (if they had them) were far smaller. And the two armies that got the chop, the Genestealer Cult and the Squats, were the two that borrowed the most and sold the least. The Squats, aside from their bikes and stature, were essentially just another version of the Imperial Guard in 40k (they were a lot more varied in Epic). So what about the Genestealers?

Well, it was not unusual for Genestealer Cults to be Chaos cults as well. Take the above image as an example – that’s a Khorne icon. This was not that uncommon in the fluff of the time, and I remember seeing a Nurgle Genestealer cult take to the tables in the Oxford store many years ago. So if you already had Chaos and their cultists, why would you need more? 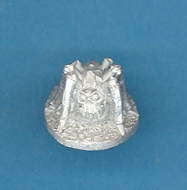 They also had squigs – a pet mushroom now firmly attached to the greenskins. The genestealer ones tended to have far more legs, but they were essentially squigs and were called squigs too. If you borrowed too much in those days, you were bound for the chop, especially if your sales weren’t up to snuff either.

It was sad to see them go. The Tyranid army are now a fully fleshed out force, beloved (and coincidentally bemoaned) by many. I think GW made the right choice in pushing the big bugs and gaunt swarms as it brought something really interesting to game – a new type of army to fight with or against. But that didn’t mean we didn’t miss out on some golden opportunities with the Genestealers.

The first one I can think of is Necromunda. They would have been so perfect for the underhive skirmish game but by 1995, they were already an endangered species. Some devotees brought them into the games with homebrew or old 2nd Ed rules, but really, they lost out big time. Hopefully a new edition of Necromunda will be released by GW’s new Specialist games team and we can use the contents of the upcoming Deathwatch set in conjunction with that – how good would that be?

The New Kids On The Hive Block

So what can we expect from this upcoming release? Data slates are already surfacing for the unique Genestealer miniatures included in this set, but will that translate into a Codex or Supplement? My guess is that this will largely depend on the popularity of the boxed game, and given that it has been setting the rumour sites’ comments sections on fire for two weeks now, I think we will certainly get something like this for the new army (we may even get something straight away!). We’ve already seen codices produced with a very minimal number of units, so why not the ‘Stealers?

This could take some time though. They’ll want to push the boxed set before they split it open, but they didn’t wait too long before the Sigmarites and Khornites hit the shelves in their own boxes. It’s more the lack of rumours in that direction that makes me think there’ll be a wait, but with GW these days, who knows!? 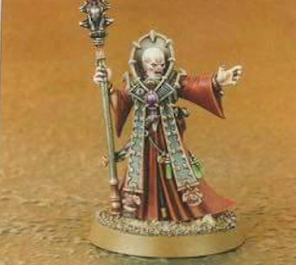 One thing we can say about the new guys though is that they look fantastic. The sprue shots don’t look like snap fit pieces either which is great. It’s awesome to see them back, and they look so good that we can say the wait was definitely worth it. They’ve remained true to many of the the old aesthetics but updated them naturally. Take a look at the Magus and you can see the same tall, rounded collar, bald head, flowing robes and ritual staff, but updated beautifully to the modern standards. The details are crisper, the pose more dynamic, but they’ve retained the overall look and feel. This is the sort of update that GW are great at doing these days, and I can’t wait to see him on the tabletop. In terms of the sculpts, it’s a massive win for GW here.

Could They Save The Tyranids? 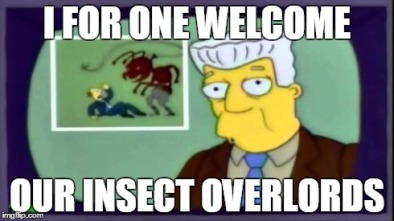 And does all of this mean that the Nids are going to have a friend to play with? Tyranid players have long lamented their not having any allies, but there shouldn’t be any issue with them taking to the battlefield with their Genestealer cousins. If they get a book of their own, or if they’re folded into the next Nids book (I think the former is more likely than the latter), this will give the great swarm plenty of new toys to play with.

Honestly, as a long standing CSM player, I’m not really of the opinion that Nids need saving, as such (not like we do!!). However, if it makes others happier, and if it brings back a real classic like the Genestealer Cult, I’m all for it. All of this has made me a very happy gamer.

Are you excited to see the cult return? Will you be rushing to the stores to pick up the box set when it hits the shelves? Comments below, please. Onwards!

8 comments on “Genestealer Cult – What it was, what it could be…”