And so the Blood Angels Command Squad is completed by this, my Chosen (who I was erroneously calling a ‘Captain’ until I checked the big Heresy book) and I’m pretty happy with him. I wish I could say the same for my photography. I checked, double checked and tried to make sure that my setup was exactly as it was last time, and yet the images just aren’t as good! I just don’t have the eye of a photographer, I guess. But never mind that! I think he looks spiffing, so I’m happy enough.

Again with this chap, I incorporated plenty of yellows and blacks into the colour scheme as I’m a huge fan of the look it creates. It also really takes the overall look away from the other red colour schemes of the heresy, namely the Thousand Sons and Word Bearers. And of course it has that 2nd Ed box art look about it which I love. I also like Watford FC football team (Up the Hornets) and my Scottish Tartan is McLeod – go check it out and see why it’s known as ‘Loud McLeod‘. Surely it can’t be a coincidence…? 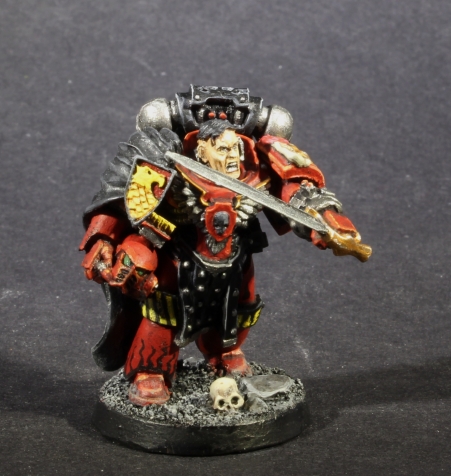 This miniature presented a number of challenges and though I’m pleased with how it came out, boy, was there some cursing and swearing throughout this guy’s creation. I changed the sword that came with the model for one from the MkIV weapons pack from Forge World. The sword that it came with was fiddly as hell and while trying to free some fiddly cables from some flash, I cut through the cables and into my finger in the process. That was fun. And taking the blade from the flash caused more problems. In the end I scrapped it for this sabre and I’m glad I did. I added some embossing to the blade which turned out alright but that entire arm ended up being one stress after the other.

I swapped out one of the shoulder pads for a slightly more embellished one but between the undercoat going weird (has anyone else noticed this with the recently repackaged Chaos Black spray?) and the details getting lost all over, I’m still not satisfied with it. I may rip that off and start again, but maybe I’ll learn to live with it.

Anyway, enough grumbling (he says and then while proofreading realised that the grumbling continues in the same paragraph)! I Enjoyed adding the various little bits of freehand to the armour, like the black flames and the ‘IX’ on the legs. Though looking at that photo, I’m now seeing a mould line I swear isn’t on the model on the thigh. I swear it’s not there!! Grrrrr…

The black cape was tough too. I’m not great with black cloth in general, but I really wanted it for this guy. I thought about embellishing it with some patterns but decided against it as I really want these guys to be part of a working army, always at war and with little time for such decoration – his dress cape is in a wardrobe back on Baal). I think it worked out ok. I also think the effect of the ash from the base being kicked up onto their boots and the bottom of that cape looks ok too. See, I’m looking for positives!

Other challenges included the eyes of the helmet which I didn’t just to be black, but given that it’s empty, I didn’t want them to be ‘alive’ like they are on the standard bearer. I wanted them to be dull and I settled on a green that works, but again, I’m not 100% sold. 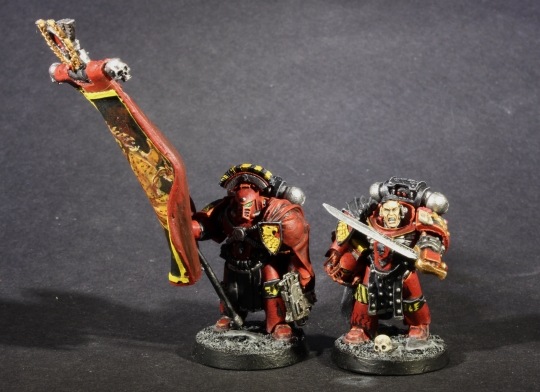 This is the image that tells me this was a good project (or it would be IF I COULD USE A %πΩ£ING CAMERA!!) and the two of them together do look great. They have a genuine air of two leaders barking orders to the troops while accompanying their Praetor to battle. I’m really enjoying painting red, and I finally cracked open the Betrayal at Calth set the other day and took a look at what I’ve got to work with for this project. There should be some fun times ahead. Now I’m off to go find some photography courses and a chill pill. Onwards.