So I Bought A Warhound Titan – This Will be A Challenge 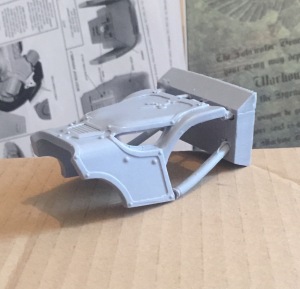 Yep. I did it. I took the plunge. I splurged and treated myself to one of Forge World’s Warhound Titans and yesterday it arrived (as I mentioned in my last post). I am excited and terrified, and feeling guilty, happy, a little sleepy, intrigued… it’s a roller-coaster of emotions. But most of all, I’m really looking forward to getting to grips with my most challenging hobby project to date. So, here are some more details, plans and thoughts.

The Hows And Whys

I was brought up to be frugal. My parents didn’t really spend much money, nor my grandparents. Saving was always the key to success and I inherited that way of thinking. So whenever I do splurge on expensive toys (and I do count £300+ to be a splurge), I do feel guilty. I can’t help it. It’s encoded into me. Even though I guess I don’t really have to worry that much. I have no debts and I get paid a decent wage these days, so why shouldn’t I treat myself? And in those circumstances, £341 isn’t too dear, right? Exactly.

But I also sold an old iPhone and cashed in almost £200 in silver coins that I’ve been collecting for a couple of years, so it’s really not too bad of an outlay. Besides, the amount of time this project is going to take up, I probably would have spent the same amount on other minis anyway. See how I keep having to justify this to myself!?!

I’ve always loved the model – like, since it was in epic scale. I think it’s the most dynamic of the Titans and it has that prowling, predatory look to it, as if it’s hunting down its prey. I can see it lurking behind shattered buildings and skulking through smoke to ambush its enemies. Of course, that means me sculpting it to look like that, but we’ll cross that bridge later.

In terms of the why, I really want to take my freehand painting skills to the next level now, and this beast provides a huge canvas area. I’ve got some really grand plans for this one, that will really test me. I’m going to have to do a lot of practicing and meticulous planning if I’m going to pull this off, but painting is a long way away at the moment. A loooong way away. More on that later then.

Since placing my order, I’ve been scouring the internet for resources of information about how this thing gets put together and painted. Thankfully, there are some great bloggers and Youtubers out there who have documented their own techniques, builds and tools/equipment used in the process. Here are some of the good ones: 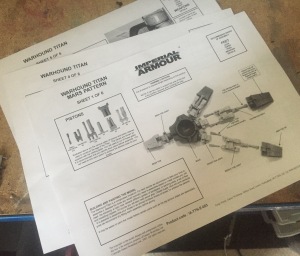 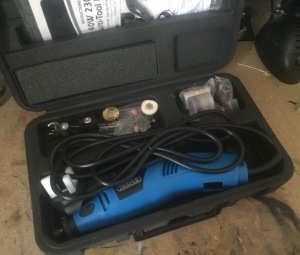 In terms of what I’ve got to do, for prep work, I’ve already invested in some JB Weld two part epoxy (because why risk superglue when this stuff can cold weld an actual car engine block?), a new coping saw, a multi tool (above), and I’m off today to pick up some new drill bits and pieces and pinning wire too. Magnets are being ordered as well. Of course the first step will be washing all of this resin and removing the flash. I should also say that I have never felt so much cast removing agent on a piece of FW stuff before. It’s slick with it, which I totally understand because kits this size must be tough to remove and the company really don’t want it to mess up. 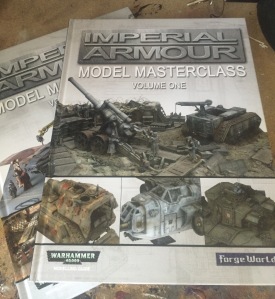 I’ve also been reading up a lot using the Modelling Masterclass books too. Although there are no specific guides for the Warhound Titan, there’s plenty of info and the second book has a painting/assembly guide for the Reaver, and that helps a lot.

My aim is for the Warhound Titan to be complete by the end of November. That gives me two whole months and change to get everything pinned, bonded, built, magnetised and painted, so I should be good. I might even take a bit of time off work to really get to grips with it and bust through some of the tougher stuff. I’m determined not to rush it though, whatever happens. This is too big an investment for me to have a ‘that’ll do attitude’. This will be my showpiece model so I want it to be built perfectly, and sturdily, and the paint job is going to look fine too. That’s my pledge.

It was still surreal waking up today and seeing this huge box full of Titan at the end of my bed. My inner 12 year old was like a kid on Christmas morning and though I’ve taken out and lovingly fondled may of the pieces of this kit, I’ve been very careful to keep the bags complete. There are so many components (especially for the feet!!) and I don’t want them getting mixed up and lost – Forge World have used a pretty logical system to bag up the pieces too.

So, as I mentioned, I’m off to do a bit of manly shopping today for drills and metal stuff that makes scary noises. I’m not going to be doing a full tutorial on this guy (the guys above have done some great work on that already) but there will be plenty of updates on this blog over the next couple of months. Oh, and I also need to get in touch with FW as they’ve sent me the wrong weapon pattern for one of the arms – I got a Lucius Pattern mega bolter instead of the Mars Pattern. But it’ll be a long time before I get on to the weapons, so nothing to worry about there. 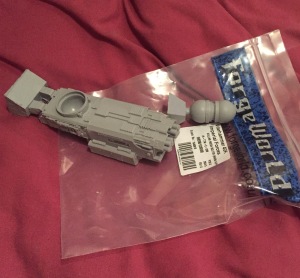 Anyway, I’ll keep you posted. Wish me luck, and hopefully I’ll have some wips to show you soon. Onwards!