There is something special about Forge World. There always was really, but for some reason, some wonderful reason, it has never lost its sparkle. So when me and my bestest buddy, Mr Henry South of fourgotowar.blogspot.co.uk popped up to the city of Robin Hood for the weekend, we were both giddy with glee (or whatever the more manly, hairy knuckled, beer swilling  equivalent of that might be). Henry was especially gleeful given that he would be picking up his shiny new Warlord Titan (the mad fool). Warning: Spoilers (and really crap quality photos) abound…

A brief detour from the main focus of this article for the benefit of those planning on one day making the pilgrimage to Nottingham themselves – it’s a lovely town. It’s really pretty, the people are friendly and there’s a really good vibe to the place – a lot of positivity. Just don’t stay at the Britannia hotel – it was the one downside to the weekend – it’s downright awful, woeful and bad. But I don’t want to end my review of the town on a sour note though (because it really was a very nice place to go), so here’s me showing some amateur how it’s done: 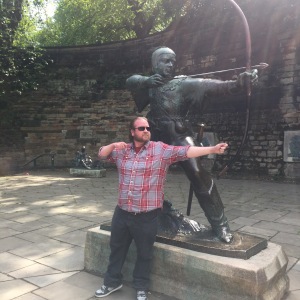 After a Sunday Morning fry up, we hopped in a reasonably priced cab from the city centre and got down to Warhammer World. We were about half an hour early but the queue was already really long, though it moved with steady alacrity as soon as the door opened. This was my first trip to the new and improved home of the hobby (now with extra sprinkles) and the improvements are brilliant, from subtle changes like fitting a couple of extra tables into Bugman’s Bar, to the much more obvious changes such as the installation of the new Forge World and Black Library stores. There’s also the museum part, but we’ll get to that a little later. 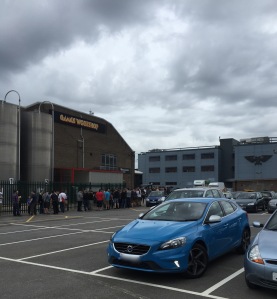 The first thing we did was head to the pre-orders stand where I, as the weekend’s dedicated Titan Sherpa, hauled several large boxes containing most of a Warlord Titan over to a bench where Henry then packed it into a suitcase. It was unpacked in the company of John Blanche who was as intrigued about its size and the pieces of resin as we were. It looked like almost perfect resin casting and I’m sure Henry will venerate it like a tech priest would if the Magos was looking.

My next stop was to the cabinets containing the painting competition entrees where I added my latest FW-based creation to the mix – there’ll be a post all about him appearing here soon. Once he’d been put in pride of place in the surprisingly empty cabinet (seriously low turnout for the painting comp this year – though the quality was of course very high) it was time to set about the day. 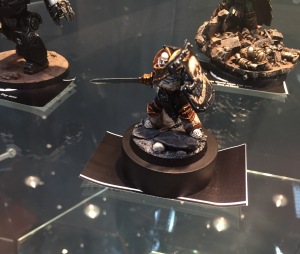 So What Have Forge World Been Up To?

OMG. I’m not usually one to throw text speak around on this blog but seriously, the stuff they’ve got in the pipelines is beyond belief awesome. Here are some pics for you to enjoy…

My personal star of the show goes to the Mastodon (above). This thing is an absolute beast of a transport. What’s more the, front doors open on pistons and the detailing inside is so good that they’ve designed it so that you can lift the lid off easily and look inside. It’s a stinking great monster and I think I’m in love. Look out for it maybe in time for Christmas!

Really excited to see Eidolon in the works. The sculpt is perfect and I think he might be my favourite of the Horus Heresy minis so far. That hair…

I love it when Forge World do the subtle stuff almost as much as I do when they do the massive crazy stuff. In this pic, we can see a cool new Raven Guard sniper squad in the foreground, and at the back there, a load of new pintle mounted weapons. Great ideas both!

This guy looks brilliant too – he has a face like General Grievous but with Santa’s hat on top. Somehow that works though, so I’m not knocking it. 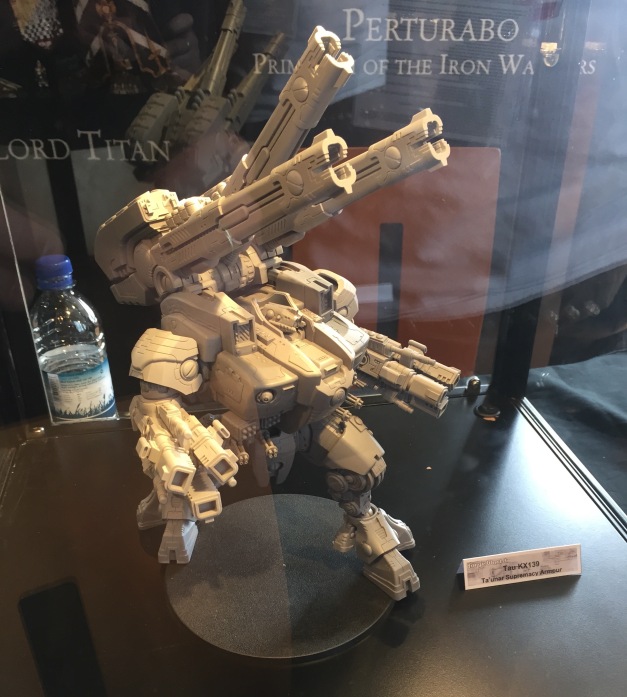 Then there’s this. If you play Tau and ever wonder ‘could I bring a single model that could kill an entire army and probably a titan too?’ then we have a resounding ‘Yes!’ in the form of this KX139 ‘Supremacy’ suit. I love this thing. It’s freaking huge – the tops of those barrels would be around the top of a Warhound or higher, and it is bristling with weaponry. It’s silly, mad and just fantastic.

Here are a few more shots of what else was on show: 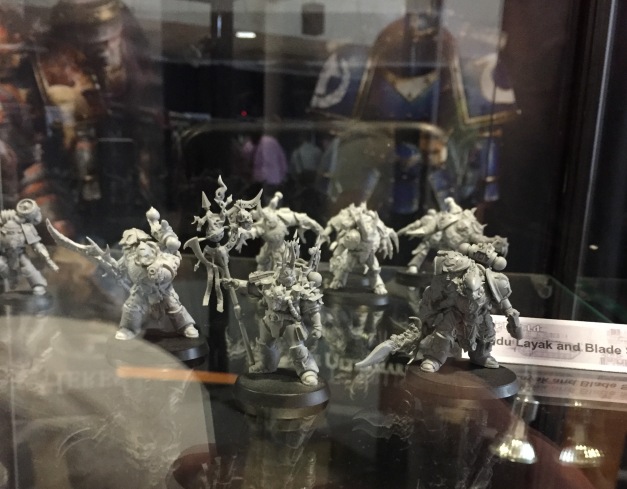 Last time I went to WW, the hall of miniatures was just a room full of miniatures. Certainly cool, but not exactly inspiring. Well now, the museum section of Warhammer World is simply a must see attraction for anyone who loves the hobby. First off, it’s huge. Room after room of Eavy Metal miniatures and staggeringly well done dioramas. I cannot stress just how insanely brilliant it is to see all of this stuff. Secondly, there’s so much history in there too. But I’m not going to talk too much about it – pictures speak louder than words etc. Apologies for the occasional potato-quality images – dramatic lighting and glass cases do nothing to help the iPhone camera.

Now that’s was a blast from the past.

That’s Ferrus about to lose his bonce up there! 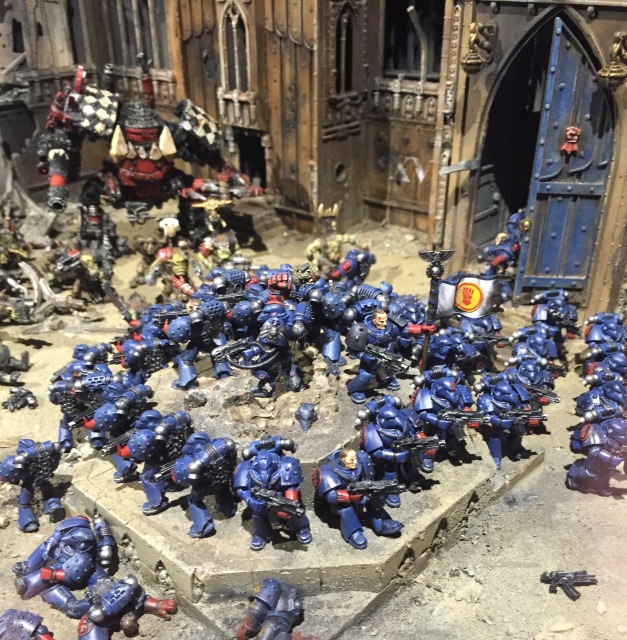 Told you it’s awesome – I really recommend going to see it yourself because my pictures just don’t do it justice, and this is but a slice of what you’ll see. One little thing that I will call out are these guys:

They have always been my favourite Gretchin and I mentioned them in this post that I did a while back. A real treat to see them in the flesh and though they’re not the coolest thing in the room, I had a little moment when I saw them.

Winding Down and What I Left With

After we watched me not win the painting competition (was never going to happen but one can dream) and after neither of us won the Reaver Titan raffle (grumble grumble), much time was spent picking up bits and pieces in the stores and drinking on the Bugman’s Bar balcony in the sunshine. 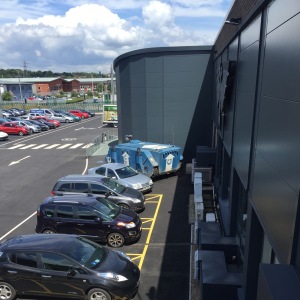 I picked up the Magos Dominus with Rad Cleanser from the FW store, so that will be added to the painting to-do list. We played a little of the titan game that was going on in the hall – a 5 vs 5 battle involving Reavers, Warhounds and of course the new Warlords that was really fun. And before too long it was time to head to the station and return to that London from whence we came. 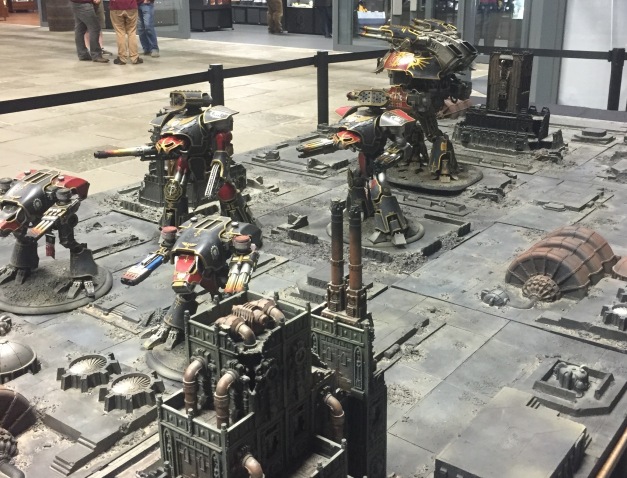 One last note though, when we were leaving, we stopped by the new Age of Sigmar minis and a great little diorama in the lobby of Warhammer World. I’m really excited to watch how this develops and it really does look like the future. Having read White Dwarf on the way up, I’m intrigued to see what will come next. Those minis look great and it has rejuvenated already the interest in GW’s fantasy offering that had been lost over the years to many due to its over-complicated and bloated rule set and range. It looks like so much fun now, and I hope to play my first game soon.

So there you go then. I hope you enjoyed the pictures and words. A big thank you to the FW team and everyone working at WW today – so friendly and helpful. And thank you Henry for being a wonderful travelling buddy as ever. Will get the camera out soon and  take some pictures of the mini I entered for the competition today. But until then, happy hobbying. Onwards!