Not that I’m totally obsessed with Predators or anything at the moment, work has now begun on my Mortifactors Predator that will hopefully change up the look of my army a bit and offer some serious firepower to my force.

I’m going for a completely different look for this Predator compared to the Rhinos that have come before. Still very much in the same palette, the colour balance is changed somewhat and the yellow of the II Company is gone. I’ll expand upon all the reasoning for this when I’ve got the tank up in a completed state, but basically, I want this thing to look like a hunter (an actual hunter not the tank of the same name – stupid, confusing Space Marines). I want it to look like it’s stalking (not like a Stalker) its prey across the battlefield and this colour balance works better for that.

Painting black is fraught with issues and I am not about to even dare to dish out a tutorial on it – there are far better out there on Youtube and if you’re going down the direction of Black Legion, Raven Guard, Ravenwing or anything with that sort of colour scheme, those vids are worth a watch. These pictures don’t pick up the more subtle blends in the black, but using Eshin Grey mixed in various amounts with black, I’ve managed to create some depth and contrast. This shows up a little better in the next shot. 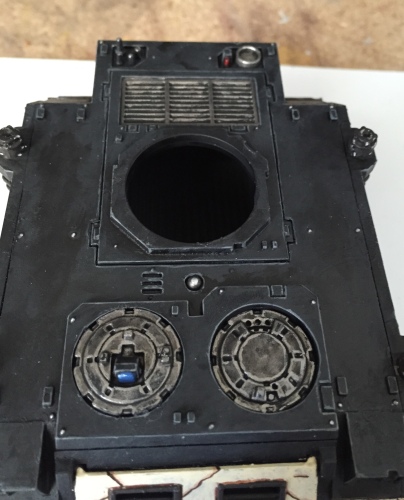 I’m painting the sponsons and turret separately to make my life easier and I’ve barely started on any real detailing. The front of the tank is getting its first base coats now and hopefully it will be good to go at the end of this week or early next. Onwards!