What does this mean?!

So i just received an order from GW and despite having nothing in there Tyranid-related, the box contained a couple of very Tyranidy pieces indeed! Now I should stress that with the new big bugs, their supposed inclusion in the next campaign box and the confirmed upcoming pods, this could just be to highlight this month’s focus, but the phrase ‘Evolution of the End’ really caught my eye. The image above says it all, but what does it mean? A new campaign featuring Guard (you can see them in a couple of the images above) and Tyranids? Or is this the beginning of the ‘End Times’ for 40k (because that all looks very End Timey)? Is this 40k’s version of the Nagash book, heralding the greatest threat to the Imperium and, dare we say it, the progression of the 40k timeline? Or, as mentioned, is this simply throw away marketing material to remind people that Tyranids are getting a second wave?

This postcard sized piece of promo material appeared in my package and highlights the four stages of a Tyranid attack on a world. With the other side highlighting the second stage…

When I first opened my package, my jaw hit the floor but it just seems so bizarre to do it like this. Everyone has always speculated that the Tyranids will have the final say in the fate of the galaxy – will this be the beginning of it?

Not to back peddle within one line of an outlandish speculation, but (not knowing what to think) this could just be (and in fairness most likely is) just part of a promotional campaign for a book/set that will come out, but the mind does boggle. Is this something more? Look at the colours and the layout – very similar to the End Times stuff… 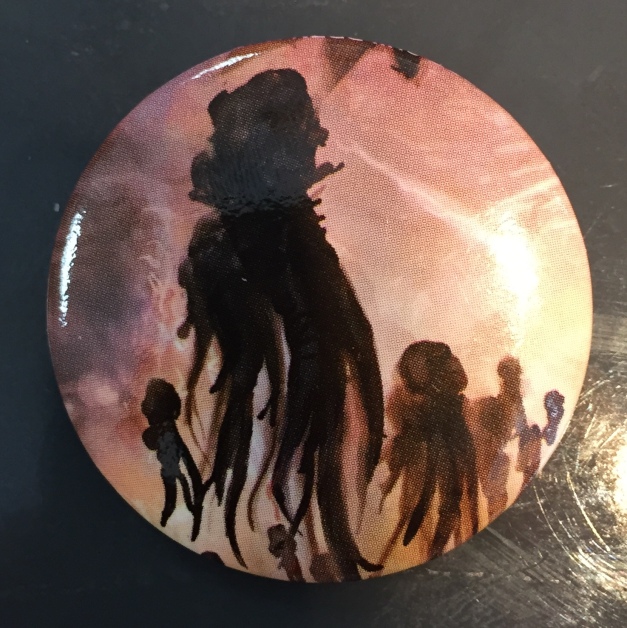 Whether this is throw away marketing or something bigger, I got another cool badge in this box, featuring Tyranid spores. Last month’s order landed me a badge with one of John Blanche’s illustrations on it (as seen below) and that did all herald in the Glotkin book and Nurgle models. I know they’re not much but I really like that they take the time to do this and it does make me want to order on a monthly basis just to see what i get.

I guess we’ll have to wait and find out what the weeks ahead have in store but I am excited. And I don’t even like Tyranids!!