Posted by johnnya10 on 26/04/2014
Posted in: Basing, My Painting and Modelling. Tagged: display base, display plinth, miniature basing, Mortifactors. Leave a comment

Mortifactors Vanguard Veterans on Display Base

I may not have been posting much recently, but that doesn’t mean that I’ve been neglecting my hobby work and though I’ve not been able to get any new models painted, I have been able to create a fancy-pants display base for any painting competitions that I might enter in the future. Currently featuring the Vanguard Veterans from my Mortifactors project, it’ll work for any of the models that I base in this style, and that’s pretty useful. And because you’ve all been good little hobbyists, I’ve taken lots of snaps of the process of creating just such a piece, and will hopefully give you lots of hints and tips. Let’s dive straight in…

1. In the beginning, there was wood… 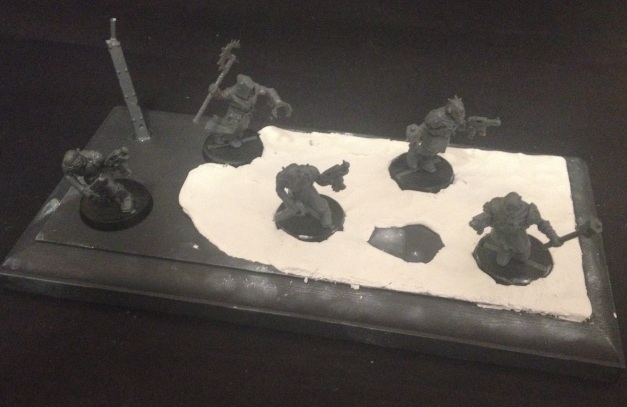 So, I picked up a wooden plinth at Salute, though really any piece of wood will do you. I then primed it with some grey primer to protect it a little from the paints and moisture of the clay. I had a vision in my mind of what I wanted it to look like and I wanted to play to some of my strengths, so I stuck down the girder that you can see at the back there because I know I do a good girder. Then, knowing that I wanted to have five minis with standard infantry bases on there so I used my much abused and shamefully neglected cultists and stuck them on there with some blue tack.

Next up, I used white milliput and covered the top part of the plinth. I didn’t use lots as I didn’t want to go too high. I also left a patch for a puddle.

Once it was covered, I stuck in a bit of rhino hatch and left it to dry. And once it was dry, I removed the cultists, making sure that I moved them a little. Milliput shifts a tad and even when you think it’s dry, it still has a little expanding left to do. You can rescue it with a little sandpaper later on, but it’s easier to do it this way and means less hassle further down the line.

The next part of the process involves adding the texture. This means adding first some rocks (small clumps and clusters of differing sizes around the base in a scatter pattern) and then by adding some sand. I also added a knife and a melta bomb for setting. Finally I layered the bottom of the puddle with some green stuff to removed the wood texture from the bed.

When all of that was dry, I gave it a quick blast with some Chaos Black undercoating spray and then left that to dry too. Modelling done, it’s now onto the painting. 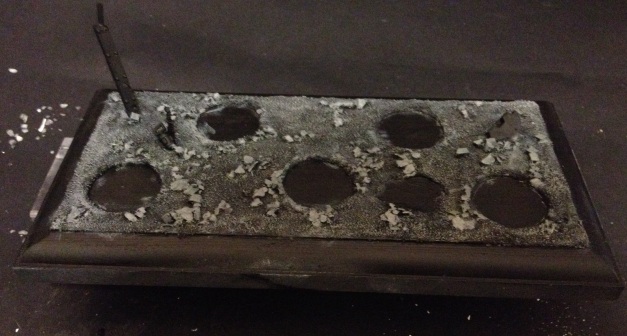 The first stage for this is dry-brushing with the Citadel paint Dawnstone. Use an old brush and keep it a little rough and natural looking. Then, make sure all the rocks are painted a little more solidly with the same paint.

Now, using Administratum Grey, I edge highlighted all the rocks, and then dry-brushed the same shade all over the rest of the base, highlighting rather than covering. For the most part, that’s the majority of the base done. Now for some details… 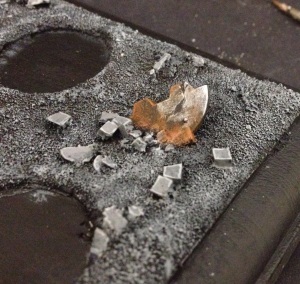 All the details come next. Among them is the above rusty rhino door which utilised various technical paints. Next up is the puddle which involved painting the bed in browns, then covering it in a brown/black wash. After that, I used a clear setting multipurpose glue and finally covered it with some more brown wash and some gloss. This is what it looks like: 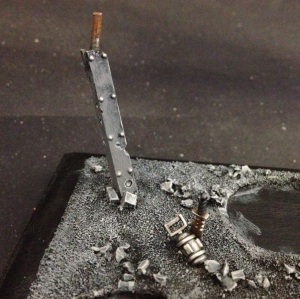 The knife, melta bomb and girder were all painted to go with the theme. I used the same greys that were used throughout the base for the girder, silver for the rivets and the reinforced pole which then got the rust effect treatment. The knife got really rusty too, but I kept the melta bomb looking pretty clean as if it were newer. And that’s the details done.

The last step involved covering the edges with a couple of coats of Abaddon Black. I also had to clean up the edges of the actual scenic part of the base and remove some errant sand and glue. Then I applied the paint using the Daler Rowney System 3 brushes because those guys don’t leave brushstrokes and they’re a good size too. And that’s it! Done. Here’s the finished article:

Last thing is to add the models. I’m really happy about how this turned out and I think the Vanguard Veterans look great sat on there. If I work up the courage to enter a competition, this will provide a nice base for a squad entry and it’ll look spiffing on my shelf too.

Any questions, ideas, comments or constructive criticism, please leave them below. I shall leave you with a last shot of my Mortifactors Vets looking awesome. Onwards!