What weighs half a tonne, is made of metal and is a real pain to paint? My Blood Angels Land Speeder for my Horus Heresy/30K force, that’s what. It’s been really fun to work on this, but also a real struggle too because of, well, plenty of reasons that I’ll get to in a short while. Anyway, without further ado, let us take a closer look at the model that I’m calling ‘The Hammer’.

As you may well know, your 30k legion armies can take Land Speeder Javelins and they make an excellent addition to any force. The Forge World model looks amazing and you can take some real firepower with each one. I wanted to add one of these to my Blood Angels force as I felt I needed some Fast Attack, but, you see, there’s always been one type of Land Speeder that I’ve always wanted to paint and play with since I was a wee nipper and you’re looking at it.

I picked this up from Ebay for less than £15 (plus shipping) and I got a pretty good deal as it was missing its weapons – parts I wasn’t going to need anyway. I picked up the pintle mounted weapons set from Forge World for another project (as yet unstarted) and one of the Contemptor Dreadnought missile racks as well. These have given me a tank hunting speeder that can dash into the back lines and start taking apart some armour. 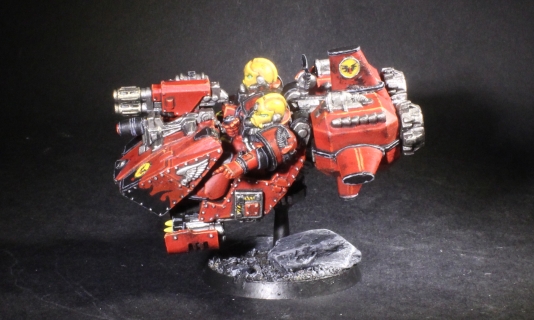 I also used an arm from a 40k space marine, an icon from the Blood Angels upgrade pack, some shoulder pads and some etched brass from Forge World to add some details to the kit. The old metal mini weighs so much that your wrist starts to hurt if you’ve been holding it for more than 5 minutes, but it’s also a little light on details, so these little embellishments helped to bring it up to snuff. They also added to the weight, so a wrist support was used at all times. Seriously, if anyone calls a Stormraven a ‘flying brick’ again, get them to pick up one of these.

I’ve named it the ‘Land Speeder Hammer’ as opposed to the Javelin and I like to think that it’s an experimental mark that the Blood Angels are testing out for the Mechanicum. Also, I’m pretty sure I could use it to bang a nail into a wall. And I’m not talking plaster – I’m talking brick.

So you might have noticed the flames. Yes, they are very cool. I’m really happy with the way they turned out and it really helps to make the model a little less bland. The yellow helmets were something that I ‘ummed’ and ‘aahed’ about for a little while, but they work so I’m glad I went in that direction. That being said, I hate painting yellow – it’s a knack I don’t have yet as I don’t get a lot of practice with it. I also painted the flying stand black. I hate the look of the clear plastic stands and this works fine for me. Will a truly elegant solution ever be found? Well, there’s that guy who used magnets to make his Eldar jetbike float but I don’t think there are any magnets strong enough to lift this thing.

There’s lots of light weathering too. Mainly because it fits in with the army and looks good, but also because it hides a lot of issues with the old metal. Weird lines, lumps and scratches. They don’t build them like they used to, and that’s a good thing. Although the old styling is still pretty boss.

I was reminded again that I hate painting metal minis. I love the nostalgia, but in practice, they’re a pain. When someone says ‘but if it’s got undercoat on it, isn’t it the same as painting plastic’ you may laugh in their face. The brush moves differently, the paint sits and dries differently, and details get lost fast. I’m really looking forward to working on a plastic mini next, and preferably not one with so many hard to reach spots. Half of the parts needed to be attached, detached and reattached all over again just so that I could get to everywhere that needed painting. Not fun. Long live plastic minis. 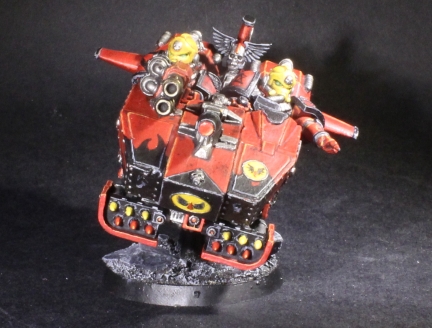 And etched brass can be a pain too. But even with all of that in mind, it was still great to finally paint one of these minis. I’ve wanted to paint one of these since I was a kid, and I actually love the blocky looks. And I’m thrilled with how the underslung missile pod looks – I love it when a plan comes together. Another childhood dream realised – always a nice feeling.

With that, I think I’m done for the year when it comes to Blood Angels. Well, at least when it comes to posting things up here. Let’s just say that I’ve been scrubbing a bit more resin lately. Anyway, I hope you like the Land Speeder – it really was great fun to see it come to life, even with all of its flaws.

I thought I’d end this post with a group shot of all the Blood Angels I’ve done so far. These have all been done this year, and all of them have been shared here. More will come in 2017, so keep your eyes open for those. All that’s left to do is for me to wish you a very merry Christmas. Onwards!