Posted by johnnya10 on 19/02/2018
Posted in: My Painting and Modelling. Tagged: road to warhammer fest, WIPs. 8 Comments

This is is my first update for you on the work that I’m doing on projects to take to Golden Demon at Warhammer Fest this May. And to start with, I’m going to take you through the very early stages of my first project – a duel.

So, I’ve kind of had this idea for a couple of years now, though I’m now adapting it to make it more thematic and in line with the fluff and the current stories running through the 41st Millennium narrative. I wanted to paint up a Harlequin Solitaire using his Harlequin’s Kiss weapon, but in the original iteration, he would be facing off against a T’au Crisis Suit. But I don’t have any experience painting T’au, and it’s not very story driven – these guys have no long running specific beef. That’s why I’ll be working on…

I never could stay away from Slaanesh for too long, and in this case, I’ll be using a crazy-colourful Emperor’s Children terminator – one of my favourites. This guy won’t be having a fun time though, as he’ll have been hit by a lightning fast attack by a Solitaire who is now leaping away and leaving him for dead.  I’m hoping to create something quite unique and dynamic to take to the show – it has its risks but if I get it right, it should look very cool.

I’ve started work on the base. It’s going to be simple, but I’m going to stick to what I know, and play to my strengths. Here’s an early snapshot for you:

Of course it’s going to have some flock added to it, and there will be a few more smaller details to be help give it some personality, but this is the basis of the base. The Terminator will be standing atop of the rock formation, and the Solitaire will be using the terminator to spring forward – that might be a little hard to imagine, but hopefully you’ll see the finished work before too long.

It’s not the best of pictures, but you can see that I’ve started work on the crazy colourful terminator armour. I’m working from his boots up and I’ve already reached the belt. I’ve learned new methods for painting metallics, and my animal skin/pattern game is happily on point at the moment. So far, I’ve got space tiger, space zebra, and space snake all in the mix.

One other thing that I need to be on point is my freehand game. I wanted to include a portrait of daemon Fulgrim on one of the shoulders – something a little different to a classic Slaanesh symbol, and I started off by picking this illustration to work from: 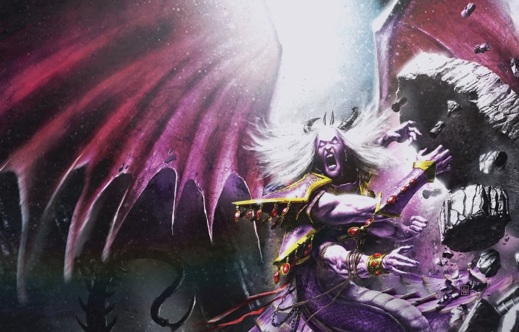 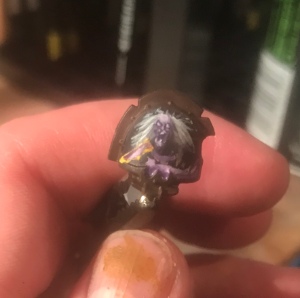 Now, if I was trying to paint Eddie for a new Iron Maiden album, this might not be so bad, but this didn’t work for me. It’s far too sloppy, and the colours don’t work – it’s not good enough. So, I covered it up, and started again, approaching things from a different way.

Again, not the best shot – gold always seems to mess up my iphone camera, but this is much, much better. It’s far more in keeping, and it actually looks like the illustration of the daemonic Phoenician. It’ll look great when the whole thing is put together.

So, that’s the WIP of my duel so far. When I bring you my next update, I’m hoping to have the terminator and the base done. The Solitaire will be coming later when I’ll have to work out how to model monofilament wire – that should be interesting. I hope you’re having fun with your projects too, and until next time, as ever; Onwards!

8 comments on “Road To Warhammer Fest – Update 1: The Duel Begins”