Gor Half-horn – A Bounty Hunter From A Hive Far, Far Away

Posted by johnnya10 on 01/02/2018
Posted in: My Painting and Modelling. Tagged: bounty hunter, necromunda. 7 Comments

What’s this? A 4th finished miniature in five weeks? From me!? That’s right – I found some speed from somewhere, and that means that today I can introduce you to my interpretation of Gor Half-Horn who you may have noticed has taken some inspiration from another rather infamous Bounty Hunter.

When I picked up Gor from Forge World, I guess the words “Bounty Hunter” jumped into my head and pulled out an image of Boba Fett. So, I set about working out how I could conjure up the look of the Mandolorian Menace while working with a Beastman abhuman from the Underhive. 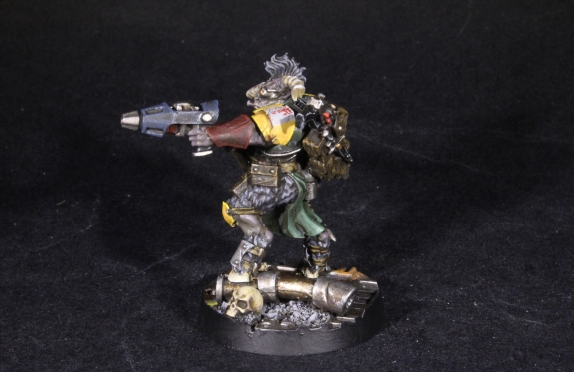 I thought about trying to make a helmet for him, but that idea died a death when I realised my greenstuff-sculpting skills really aren’t that good, and that he already has a rather cool head. So instead, I chose to use the colour palette from the Fett-man and apply it to Gor. That’s why my version has grey fur – to create the look of that jumpsuit. Beyond the grey, I realised that Boba Fett is actually quite colourful, with reds, yellows and of course greens appearing across his armour. At one stage I was worried that Gor was going to end up looking a bit too much like Robin Hood, or some of the older Marvel Doc Doom illustrations, but it turned out fine in the end. Colourful, but not out of place.

I also managed to sneak in a couple of adapted Mandolorian symbols, and while the camera might have a little trouble picking these out, they’re actually missing half a horn – clever, eh? Well, I thought so. Though trying to fit the illustration onto the chainsword blade was a bit tricky – the surface was just a tad too thin. Still, you can see in the below image that it turned out alright. 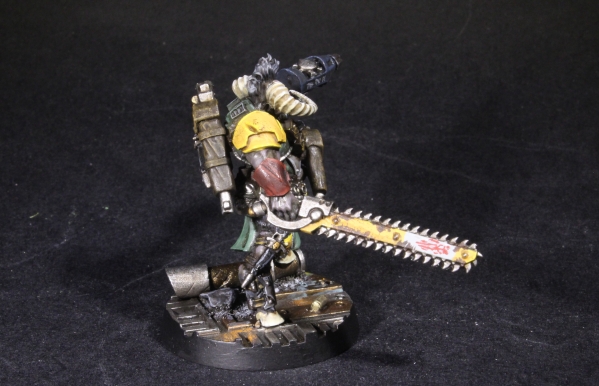 I also worked out a nice trick for painting yellow (which others may have worked out long ago) which is to use watered down Seraphim Sepia wash to darken Averland Sunset ever so slightly lower down on the armour plates. I’m going to remember to use that a bit more in future as it definitely helps to put a bit of depth into yellow which is of course a notoriously tricky colour to master.

I really like the plasma pistol on this model – it’s so nice to have this type of weapon not be dominated by the coil, and it’s such a unique design too. I went for a non-Fett colour here, using Dark Reaper as a base, and applying the little tally freehand (it’s hard to spot in these pictures) on the nearside was fiddly but rewarding. For the base, I used the same techniques as I’ve used on my Goliath gang, and it was was kind of nice for Forge World to include a skull on this one, rather than having to add my own. 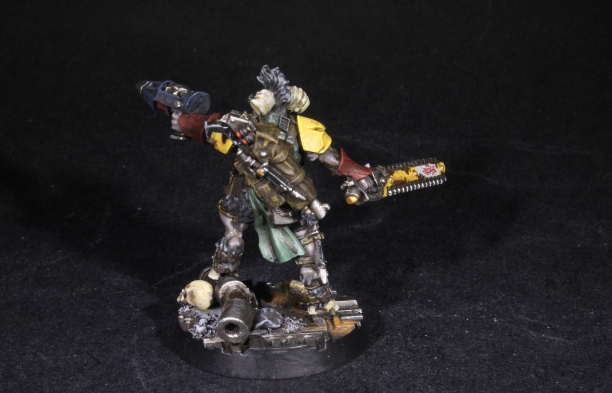 There you have it then. My bounty hunter who resides in the 40K galaxy while looking like something from the Star Wars galaxy. Two of my favourite things combined.

And speaking of two of my favourite things combined, I’ll be heading up to Nottingham for the Horus Heresy and Necromunda Weekender from Saturday so if you’re heading along as well, keep an eye out for me – I shouldn’t be hard to miss. A full review of that event next week. I actually don’t know what’s next on the painting table for me, but I dare say we’ll all find out sooner rather than later. In the meantime, I hope your own painting and modelling efforts make you happy. Onwards!

7 comments on “Gor Half-horn – A Bounty Hunter From A Hive Far, Far Away”