Building A Display Plinth For Miniatures 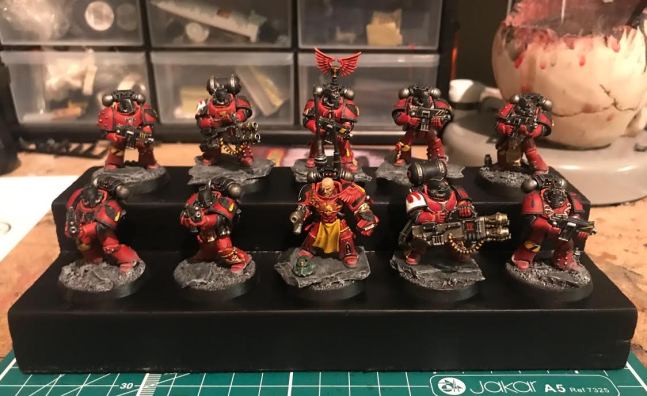 In just a couple of weeks, I’ll be heading up to Nottingham for the Horus Heresy and Necromunda Weekender and I’m very excited about it all. Among the many things to do and see, there is a Golden Demon competition going on, and I wasn’t going to take anything because a) it’s a bit of a hassle, and b) I know the quality of those attending and I don’t want to feel too bad about my own paint jobs. But as I’ve said before on here, you should enter these things for you, and not for other people, and I like to show off my work. It may not be the best but it can stand alongside (albeit slightly behind) the best.

With that in mind, I decided to man-up and take a couple of things along. I’m hoping a certain leopard-print-cloak-wearing Praetor will catch some eyes in the single miniature competition, but I want to take a squad too. While I have more than a few display stands for single miniatures, I wanted a plinth that could hold 10 miniatures on 32mm bases. Could I find one of these? I could not. I scoured the net, asked around, and got nothing.

So, I made my own. What’s more, I’m actually pretty happy with it (considering I’ve not done much woodwork for the past 15 years) and I thought I’d take you through the process of how I built my squad display stand, especially as you may have to make your own one day too. Here goes. 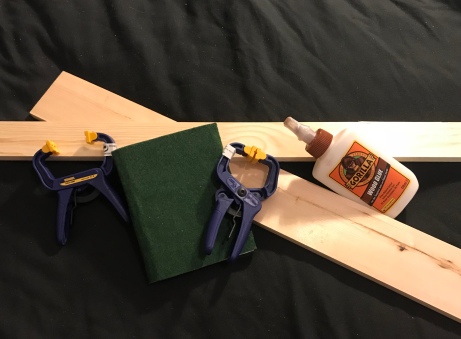 First off, I was up and early one Saturday morning to head down to what passes for a lumber store in my neck of the woods (we’re very good for antique silver birch logs for a fireplace, not so hot on untreated pine planks down my way) to pick up some wood. I bought low quality but straight edged pieces that were a couple of feet long, along with some Gorilla glue, a couple of clamps, and some felt.

I measured everything up and arrived at the conclusion that I’d need a couple of pieces that were 21cm long. I then realised that the wood that I bought was too thin, and that I’d actually need four pieces and a little more of that Gorilla glue than I’d planned on using. After the measuring (twice) and sawing (once), and a little gluing, this is what it looked like: 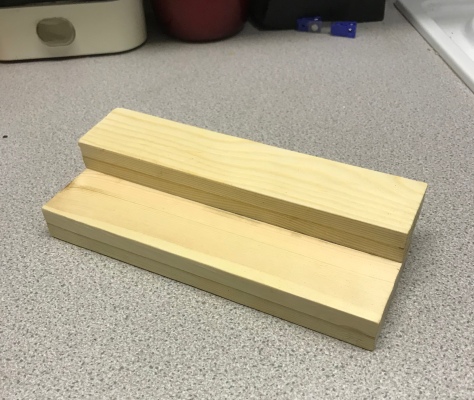 With everything sawed and sanded (including another little piece to act as a stabiliser for my stand’s stairway design), I did need to make a couple of fixes. Annoyingly a couple of clamps that I’ve had for ages went walkabout, so I had to improvise and I did it badly – we had gaps by the time the glue had dried (O, forgive me, Mr Pitcher [my former woodwork teacher at school] for I have failed you!). But being someone who has a lot of greenstuff around anyway, these weren’t hard to fill (I know this is not the traditional method, but it does fit the theme). A little more sanding, and all was sorted, at least to a level I could live with. 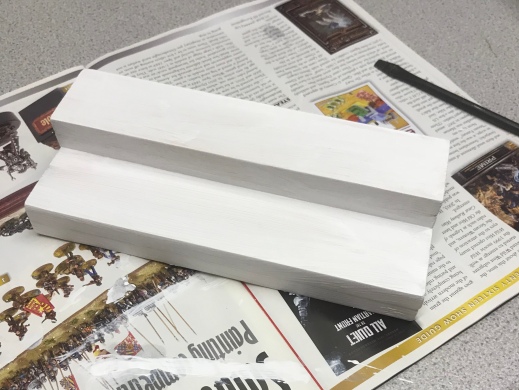 A trip to the paint store, and I had some primer (as seen above) and some black satin paint. Dulux Satinwood Once was what I bought, but boy do I wish I’d read some reviews of that paint online before buying. Here it is with the Once paint on:

The problem here is that the 16 hour drying time mentioned on the can is a complete lie. I actually don’t know how they get away with having it printed on there. Reading online, some people who had used this had tacky shelves for months afterwards. My fingers left big imprints, and I was left with oily black residue all over my hands, and that was after it had been drying for over 48 hours in a dry room! I had a decision to make, given that Nottingham is in just a couple of weeks. Here’s what I decided:

I stripped it. As much as I could. It had cured quite well over the upright sections, but even that was loose and tacky. I literally lifted it all off with just a dry tissue too – don’t use this paint if you can avoid it. So what did I do? I used the paint I should have used all along. The unsung hero of so many painting projects. I speak of course of Chaos Black spray. And once that had been applied all over in one even and easy spray (which of course was dry in 5 minutes), it was time to think about magnets.

I had thought about drilling out spaces for miniatures to sit in, but I don’t intend to get caught out the next time a base size change happens, and it would be good to use it on other units as well, so instead, I resolved to add 10 mini magnets to the stand, and add a small metal washer to the underside of each mini’s base (£1.99 for 50 steel/zinc washers at Robert Dyas – bargain). This way, the miniatures could be packed together without worrying about them shooting off and sticking to each other. After gluing these in place, I applied another thin coat of Chaos Black, and when that had dried, some Purity Seal spray was used to add a little protection. Last up, I added the padding to the underside:

And we are done! Here’s a little look at the finished product again: 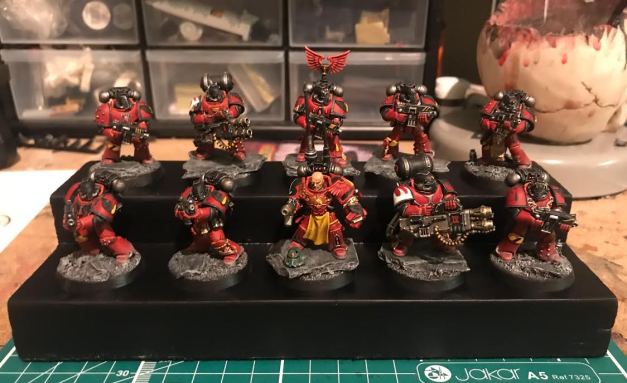 And you know what, I am genuinely proud of this. It may not be the finest bit of carpentry ever, but it’s mine, and it does just about pass muster. It’s a simple design, well executed, and I made it – like I said, genuinely proud. I could have done some things differently, but in the end, I am thrilled with the result, and it was truly rewarding to see each miniature gently snap to it.

I’ll be taking my Veteran Blood Angels Tactical Squad up to Nottingham on the 3rd, so if you’re popping along to the event too, keep an eye out for both the miniatures, and my marvellous carpentry (and me!). I very much doubt they’re good enough to do much up there, but after all of this, I just want to see my stand in all of its glory.

Have you ever made a plinth? Have you ever bought a plinth for a squad? Tell me your plinth stories in the comments below. Plinths!

4 comments on “Building A Display Plinth For Miniatures”