Posted by johnnya10 on 22/11/2017
Posted in: My Painting and Modelling. Tagged: dark mech, INQ28, necromunda, slaanesh. Leave a comment

What’s a Slaaneshi Dark Mech Magos to do when he’s hunting for parts and archeotech in the depths of the Underhive and doesn’t want to carry everything himself? Well, he could summon a daemonic steed, trap it in the mortal realm, and use it to carry his bags. That’s exactly what my Magos has done, and this is his Slaaneshi Pack Mule.

Now, you can’t have your pack mule shifting back to the warp every five minutes – you’d lose all of your stuff. So our Magos here installed some sort of fancy inhibitor chip to stop his seeker from heading back to the warp. The downside of this is that unlike other daemons who can be “killed” go back to the warp, and then come back with all their bits intact, our steed can’t do that. So when he lost his leg, our Magos had to make him a new one. That’s my fluff, and I’m sticking to it.

So, that’s what inspired me to create the little creation that you see here, to join my Slaaneshi warband that I am indeed looking forward to trying them all out in some custom games of Necromunda. 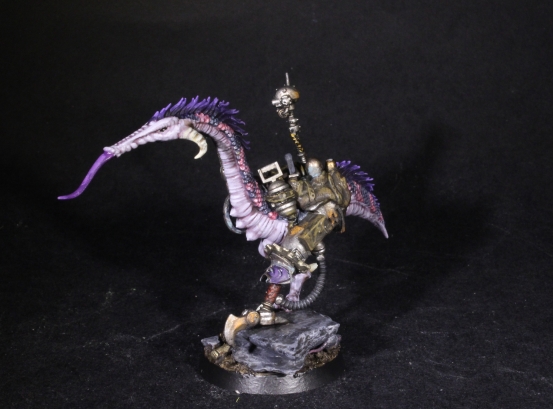 The leg took most of the time to make. There are a lot of bits involved there; too many to mention them all. The thigh though is actually from an Eldar Wraithlord’s scatter laser – it’s funny how you find these parts. All of the packs and bags on its back are green stuff, filled with bits again from various kits, and that lovely servo skull too. There’s also the wire running down the neck which is snake chain, and a torch/light has replaced one of the jaw-horns. As simple as that!

In terms of the paint job, it’s pretty traditional Slaanesh really. Lots of pinks and purples, though I’m happy with how the scales turned out. Dark Reaper and Pink Horror give the snakeskin pattern, and after some washes and highlights, I finished it off with a gloss coat which gives it that slimy-not-slimy look that snakes have.

Well, he’s a bit different anyway. Another mad creation. Not sure about the rules for him yet. I think his gammy leg should make him slower than the lightning fast seekers we’re used to. And maybe people could give up shooting attacks if they’re within 1″ of this guy can throw an object from the packs on his back instead. They range from harmless tin cans to destroyer weapons that have been picked up by the Magos. I’ll work on that. Also, I think I’ll call him Binky. 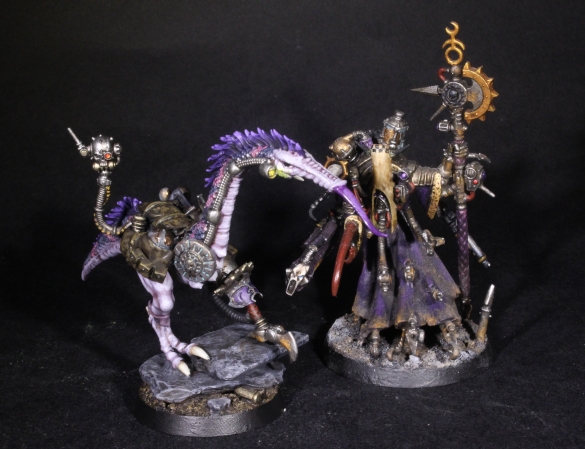 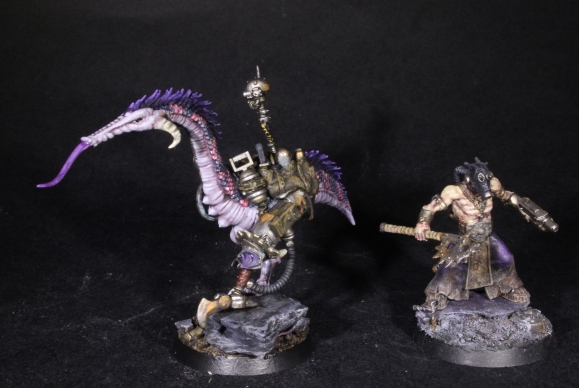 And he fits in quite nicely with the rest of my small team of Dark Mech Deviants. What’s more, I think I’ve nailed worn leather. I’m really happy with how those packs look. Binky was a lot of fun to work on.

Well, we’re just a couple of days away from Necromunda being released so expect more Underhive goodness next week and for the near future. Happy painting all. Onwards!