As it’s going to take me a little while to get this finished, and as a nice Friday treat, I thought I’d share with you a couple of images of my latest project – A Spartan for my IXth Legion. Here it is in very little of its glory: 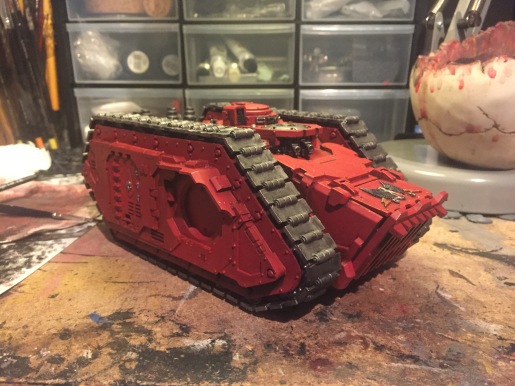 Thankfully, a lot of the leg work is done here. All the base coats are on, and the silver areas, and the top of the hull, have all seen some wash, but boy did it take some effort to get to this point. You know when you get a perfect storm of issues that lead to a project being a lot less fun than it ought to be? Well, that’s what I’ve been going through with this.

It started on Boxing Day (26th of Dec for those who don’t box), when I put this kit together. I was hungover and grumpy from a lot of festive celebrations so I was less than caring when assembling things. Entirely my own stupid fault, and I have plenty of regrets. It’s a gorgeous kit, and I owed it more TLC during assembly. But I will forever be reminded of this as there’s a little bit of wonkiness running through everything. Not overly noticeable to most (I hope) but I’ll know. There are also a lot of mould lines that I have spent a lot of time removing and this thing is now more green stuff than resin in some places, and some of the lines are still there. Weathering will save the day in the end, I’m sure.

I wanted to get one bit of it finished just to have some sense of true accomplishment, and so I have done the upper front door, which is one of the Forge World upgrades meant for Land Raiders. This is ever so slightly wonky, as it was a tad too thin and so I had to add a couple of millimetres of green stuff down one side. But that is literally the one bit that is done. All the rest of the tank is still to do and it’s going to take a while. I haven’t even built the guns yet!

So this is what will be keeping me busy for the foreseeable future. And speaking of those guns, they’ve come in classic curly FW styling so they’ll be getting a dunking in boiling water before I even start with those. But yeah, it’s a beast. A huge kit that will be fun, but I am realising more and more that I do prefer working on smaller miniatures. I don’t mean epic scale or anything like that – but I get a lot more enjoyment out of working on a single character than a big tank. I’ll still enjoy the tank, but I’ll enjoy painting a single dude a lot more. It’s important to learn these things about oneself.

There you have it then. That’s what I’ll be struggling through, and you will see the completed monster here soon(ish). May your own projects go well and speedily for you. Onwards!