Posted by johnnya10 on 24/01/2017
Posted in: Thoughts and Comment, Uncategorized. Tagged: fall of cadia. 1 Comment
Ok, so here’s the deal; if you’ve not read Fall Of Cadia yet, or if you’re trying not to see spoilers for the next Gathering Storm book, you best leave now. There are going to be plenty of spoilers for you here, and I want to give you fair warning. This is a spoiler alert, and once you’ve scrolled past the next random image, I will be talking about a lot of stuff from the first book and some recently spied miniatures. You’ve been warned…

…are they gone? Good – Let’s start.
Oh. My. Dark. Gods. I am so excited by the Gathering Storm storyline that’s going on right now, I can’t believe that it has taken me this long to get round to writing a post about it but I wanted to give everyone a chance to read the first book before I put something on this blog, because it really is best enjoyed by reading it yourself. There’s just  so much I want to talk about!! 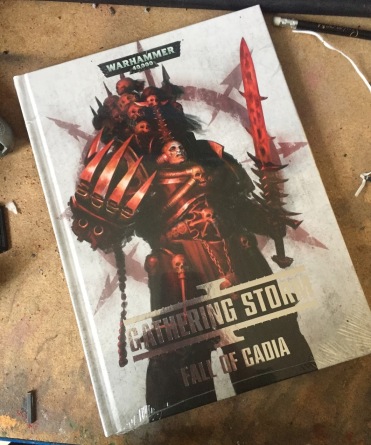 I picked up Fall Of Cadia on the day that it came out and I’d read it cover-to-cover within three hours. I couldn’t put it down. So many amazing moments and lots to be awed by. In fact, here is an accurate reenactment of my face while I was reading through this tome’s 100 pages of fluff:

Yes, it’s that good. I was never one who desperately wanted the story to advance – I thought there was enough going on to keep us all busy for, well, for 10k years probably. But I’m now 100% on board if this is the sort of story we’re going to get. Now let’s talk about some particular incidents and events from the book that helped to make this soooo cool. These are my favourite talking points from the Fall of Cadia books…
The Many Rebirths Of Celestine

The very first thing you read of the story is a mysterious, unnerving account of what it is to be Celestine and how she bides her existence while waiting for her next rebirth. There’s something quite crucial in this opening piece though – that there will come a time when Celestine won’t be able to be reborn. She is finite. The living saint has reappeared many times, but now, we learn that soon, she will not be able to reappear again. This is big news and could be a big part of the plot later on. Celestine is a brilliant character in this book, going toe-to-toe with Abaddon and inspiring the Imperial Forces like no-one else, save perhaps a Primarch. And that model…
Tricksy Space Elves
Belisarius Cawl is also a great new character and the idea that he’s been spending millennia scouring the galaxy in the name of Mars is pretty cool. What’s even cooler, is that he’s being guided by a mysterious Harlequin who is using his hunger for understanding and unlimited resources for her own designs. This is our first taste of the Eldar sticking their nose in, and the fact that it has something to do with a Pylon is even cooler.
What’s That Behind Trazyn
Gah! I tried to find this image on the internet, but no joy. Every book is made better by an appearance of Trazyn The Infinite. He’s a fun character who’s pretty cheeky in a resigned, galaxy-weary sort of way. And there are some great bits in this book, from opening his tesseract vaults, to assisting Cawl with the Pylons. But for me, the best little Easter egg in this book, doesn’t come from the storyline, but from a single image; the first of Trazyn in the book. Behind him is a giant Space Marine in Green armour that appears to have been pulled apart. The second I saw it, I said ‘Is that Vulkan!?’. Whether it is or not, that’s blatantly a little teaser/joke from the GW artist team. That rumour’s been around for a long time, and although it may not be Vulkan, we can dream…
The Blackstone Fortress

It was a long time ago that I last heard a mention of these beasts of Battle Fleet Gothic fame. It plays a key role in the story, and the destruction of Cadia as well. I like the idea that the Chaos fleet must have been saying to themselves ‘We brought that thing here to destroy Cadia, and it’s going to do just that. Quick! Strap a load of massive engine to that chunk of it and use it like a massive asteroid!’.
Kell’s Death (!)
Best guardsman’s death ever. Kell is a hero right to the end, and actually gets to spit in Abaddon’s face before having his spine snapped like a brittle, dry twig. That’s how you make a character a legend right there. Top stuff, though I was of course very sad to see him go.
Closing The Eye
When I got to the bit where Cawl works out how to use the Pylons, and actually starts to close the Eye of Terror, I did a little dance in my chair. Thousands of years and no-one’s been able to make sense of these things, and then this Johnny turns up and all of a sudden the Eye of Terror begins to close! Shame he was just a little too late. Hell, if he’d started doing that an hour earlier, we might have had a completely different story. Stupid Eldar. Why didn’t they tell him sooner!? My jaw dropped when they said the Eye was starting to close, and dropped again when it burst open again.
Trazyn’s Offer

Kell may have snuffed it, but just as you think Creed is going to go the same way, Trazyn offers the Commander of the Cadian 8th a place in his private collection. We never find out if he accepts, but it’s an elegant way of keeping him alive. Losing Kell was bad enough, so losing Creed after he led such an amazing defence of Cadia would have been a bit hard to stomach. Will we see him marshalling an army of Necron in the future? Who the heck knows.
Cadia Actually Falls
Yep. It’s dead. Outside of Mars and Terra, the most famous planet in the galaxy is now cracked in half and lost in the warp. That really is a huge deal as the Astra Militarum have now lost one of their most valuable recruiting worlds. Just thinking ‘There is no more Cadia’ really is quite weird.
Abaddon Learns Of The Box
I loved this bit. The intrigue!! This could be huge, and it’s really annoying that we don’t know what name was whispered into Abaddon’s ear by his Sorcerer as he prepared to leave Cadia, but whatever it was, it made him turn the Black Fleet around and chase Cawl’s Ark Mechanicus into real space. But what was that name? I know what I hope it will be, but I don’t dare to dream… Loken. We’re all just wondering…

The Eldar Have A Plan
Of course they always have a damn plan. That only they really understand. When the Imperial survivors crash down onto an Ice Moon, it’s the Eldar that eventually save them from Abaddon and his marauding Black Legion. That’s when we get our first glimpse of The Visarch. While Eldrad and Ynnead’s lot are holding off Chaos, the Imperial survivors appear to join with the Eldar and head into the Webway…
How about that for a game of toy soldiers, eh? These are just the bits that I loved, either because they were super cool, or because they raise so many more questions. A lot of my guesses are just guesses of course, and none of us know what’s going to happen, but we can all have a lot of fun speculating.
But Wait; There’s More!
And then, while we’re still all swooning from all of that, we get to see the new Eldar goodies, and boy do they have a story to tell. Ynnead is real, and this could spell dire times ahead for a lot of entities, most notably Slaanesh and Khaine. Before we start talking New-New-Dar, let’s just have another look at one of the shiny new models. 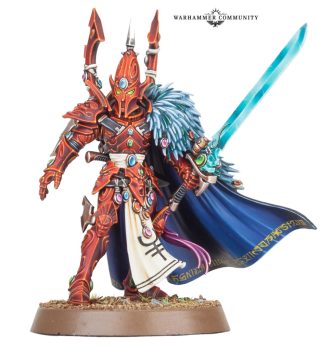 So many questions still to be answered here. We know that they’re all part of the Eldar’s God of Death theory (that now no longer appears to be just a theory) and that they represent Ynnead on the battlefield, but who are they? What’s going on?! Is the Yncarne part Slaanesh? It’s certainly got the looks for it. And how will this new deity get on with the famously fiery Avatar of Khaine? Can they get along together? Then theres the Yvraine. Is this a new ruler of Commoragh? She certainly looks the part. And then there’s The Visarch. Is this Arhra, now with a calling that fits his ambitions and philosophies? Or a completely new entity? And with the book being called ‘Fracture of Biel-Tan’, can we expect to see one of the most famous craftworlds fall?
I don’t think I’ve ever put more question marks into a single paragraph. There’s so much going on and it’s just so exciting. If you’ve got your own theories, stick them below in the comments section. I’ve got about 9,000,000 of my own, but who knows if any of it’s right. Black is white, up is down…

I can’t wait for this series to continue and find out where this is all going. Who else is going to die, who’s going to be born, how will the balance be found, and what will 8th Ed bring?