Posted by johnnya10 on 26/12/2016
Posted in: Thoughts and Comment, Uncategorized. 8 Comments
With the rotten, miserable and downright awful year that was 2016 almost out of the way, we’re now looking forward to 2017 with a sense of hope that perhaps a few less beloved celebrities will snuff it in the coming 365. I’m also hoping of course to bring you plenty more posts here on Heresy and Heroes dealing with both my own endeavours and of course the news and rumours coming from the dark citadel in Nottingham. So, as a new year’s treat, here’s a sneak peek of what’s coming up in the next few months.
Baal’s Finest

Yes, there will be more Blood Angels and as you can see from the photo above, I’ve started work on another squad. In fact, as my Veterans, these are going to be my fanciest looking Blood Angels yet, so stay tuned for more WIPs of these guys coming soon. But also, having seen the year’s progress on this project in the previous post, I noticed that something was missing; armour. So I pick up this from Forge World:

Yep. That’s a lot of tank tracks – the first of several. In fact, when these kits, and the veteran squad are finished, we can say that ‘phase 1’ will be done. Then I can really start to have some fun. But stay tuned for the completion of these kits and the next stage of my Blood Angels coming next year.
Blood Bowl

Yes, I bought the box set, and, no, I’ve not done anything with it yet. But I’m looking forward to getting the Dark Elf team when/if they ever release it. The Naggaroth Nightmares were my old team and I’d like them to be my next team too. Though I do have plans to paint up the Orc and Human teams too, the Dark Elves will likely be the kit that gets me painting for this game as well.
Slaaneshi Dark Mech

My side project, my favourite break from the boys from Baal, my Slaaneshi Dark Mech is going to grow in 2017 and I’ve already got some crazy plans in my mind for this small force. I’ve even bought some old, err, Skaven (?!) kits that will help me to do this. They’re happilly sat in the grey tide at the moment, but I’m waiting for the time when I need a break – then the dark tendrils of She Who Thirsts can creep back into my life again. Which should be oodles of fun for everyone.
My Titan

But that’s not all. 2016 has been an incredible year for GW and 40k (and, in fairness, for FW and 30k too) and it only looks like it’s going to get better in the next year. We’ve already seen the leaked pics of the new St Celestine, a new Inquisitor, and the crazy-looking Ad Mech dude, and we’ve been teased with a brooding trailer, voiced over by Abaddon himself, and the words ‘Fall Of Cadia’. With the return of Magnus, can the other daemon Primarchs be far behind? Could it be time for the Lion to wake, Russ to return, and Guilliman to heal? It looks like the story is moving forward and you can bet your bottom dollar that I’m going to have plenty to say about that here. I have the feeling that this is going to be big. 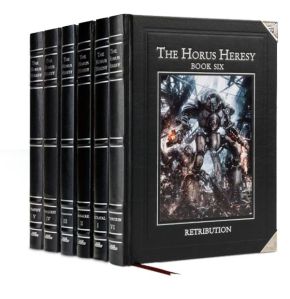 What’s more, once the Prospero book comes out from Forge World, I was told by one of the team there at the last Open Day that the Blood Angels (and Dark Angels) would be coming next, and that’s really exciting for me. Sanguinius and co may well get released in 2017 and as well as picking up the models, I dare say I’ll have at least a book review for you too.
So, that’s at least some of the stuff I’ll be writing about next year. I can’t wait to show off more images, share more opinions and even dish out the odd rumour here and there (didn’t I correctly call the Sisters release in one of my earlier posts…?). I hope you’re looking forward to it too, and I shall see you here in the New Year. Have a wonderful start to 2017. Onwards!