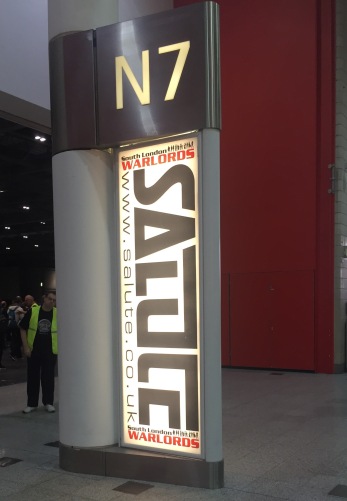 Yesterday, I spent the day at London’s best and biggest miniatures and wargaming convention, Salute, and I’m here to tell you all about it. And that’s pretty impressive given the amount of time I spent at the Fox pub outside excel drinking with the charming folks from the Hate Club – if you’re a gamer in London, they’re worth checking out. So, hangover not withstanding (and I’m not standing at all), here’s the lowdown of yesterday’s events.

As I mentioned last year, getting to the Excel is a bit of a pain in the backside, regardless of where you’re coming from. It’s London’s largest building (in terms of its footprint) and there’s always loads of conventions taking place there. With only the DLR to get people there, those driverless trains get pretty packed. We miniature-enthusiasts, as a group, are not renowned for being the most slender or, unfortunately, the best at applying deodorant so if you’re getting one of those trains, gas masks, vapo-rub under the nostrils… well, bring something. But enough moaning about the venue – that’s not what this is about. This is about a magical day that comes but once a year that even all the BO in the world can’t ruin.

So after a long queue (that moved steadily), and receiving my goody bag (free commemorative die, magazine, couple of minis), I got to the doors. To give you an idea of how big Salute is, I snapped off this shot…

An aircraft hanger full of glorious, nerdy stuff (and the above picture only shows half of it). What’s not to like about that? There were plenty of great stores offering awesome wares. So let’s talk about them.

Forge World and GW had a long stall there with an even longer queue for most of the day. New releases were all on offer, from Black Library books to the Limited Edition Imperial Space Marine. Of course the latter sold out in minutes and I ended up having to buy mine online, but that’s fine. I picked up the Horus Heresy Modelling Masterclass book and some weapons for future Blood Angel usage. One thing I did notice that’s pretty cool was the new blog, regimental-standard.com which I will definitely be keeping tabs on.

Other great stores that were there included:

There were loads more too – too many great businesses to name. That’s what makes Salute so good. Being able to see all those new games and ideas going on, witnessing all that enthusiasm and seeing people really enjoying their particular slice of the hobby pie.

There were some really cool minis in the display cases as usual, and the standard for the painting competition was very high. Unfortunately I can’t give credit to all the painters purely because I don’t know all of their names. If one of them is yours, or you know the artists, please let me know in the comments below. Here’s a selection of my favourites:

White Scars Commander by Henry South (well, I couldn’t leave him out could I?) 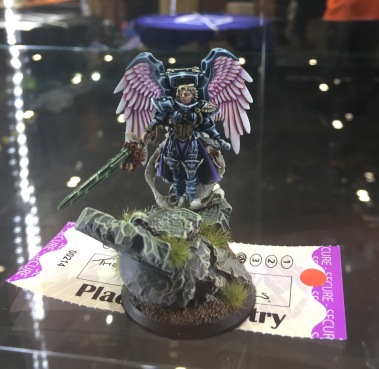 The Saint by Chris Duchesne (GingerDuck Painting and Conversions)

Like I said, if you know who I can give credit to, leave a comment below. There were lots of other really cool minis but these were my faves.

There was some pretty cool Cosplay going on as per usual. Among the historical soldiers, my buddy from last year, the Blood Angel and his guardswoman wife were there, as were the usual array of stormtroopers. Always good to see these guys posing for pictures and strolling through the hall making people smile.

There was a pretty interesting stall that I wanted to give a shout out to – The Orc’s Head. This is an idea to create a dedicated pub for miniature wargaming enthusiasts, with tables and scenery to use in London. It’s a great idea but I think they may have jumped into setting up a kickstarter a little too quickly without getting enough people pumped about the idea – and they need to do more press! But to give them a better chance, I wanted to give you a link to their kickstarter page – support them if you can/want to.

As always, there were plenty of display boards with demo games going on and some of them were spectacular. There was also a giant space ship to promote DropFleet and DropZone Commander. Here are the pictures: 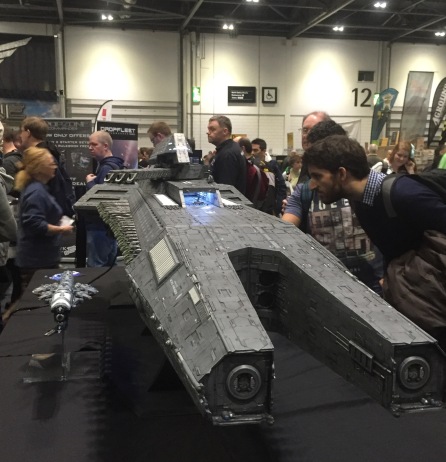 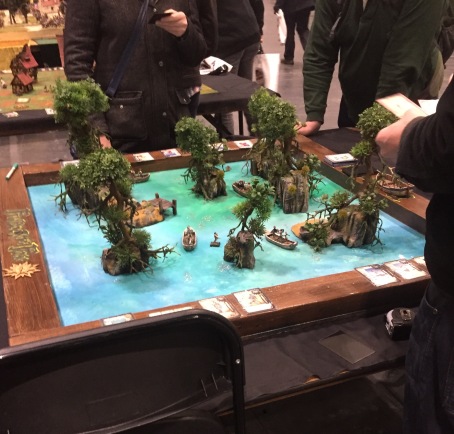 We hung around for the painting competition results at 3:30ish and then retired to the pub. Another criticism of the Excel is that the pub and drinking venue choices are very limited and disappointing – The Fox really is a hole. But it serves a purpose. I came away from the event with a great little haul that you’ll see in heresyandheroes.com in the future. It was a great event and I’d like to that South London Warlords for putting on another cracker. If you’ve never been, and you can make next year’s event, you must try to go.