And they are done. My Blood Angels Despoilers are finally complete, and, if I’m being honest, I’m thrilled with them. Using the miniatures from the Betrayal at Calth box and almost every chainsword and bolt pistol in my bits collection (along with some Forge World accessories), I’ve created a squad full of variety that looks great, and they’re my first proper unit for my 30k army. It took a lot longer than I’d hoped (what with one thing and another – it has been a very busy year so far) but hopefully this will kick off a period of a few more completed units in the coming weeks.

These guys were a lot of fun to put together and paint, and I’m still really loving Mephiston Red and the Blood Angels scheme that I’m working with. I hope I’m still taking that 2nd Ed feel into 30k and getting some good results. I’m really happy with the subtle weathering that runs across this squad, and also the different chainswords and how they give each Space Marine a bit of added character. One thing I don’t think I’ve cracked is the green lenses, but I’m getting there – I spent so long doing blue lenses, it’s kind of weird doing them in a different colour. 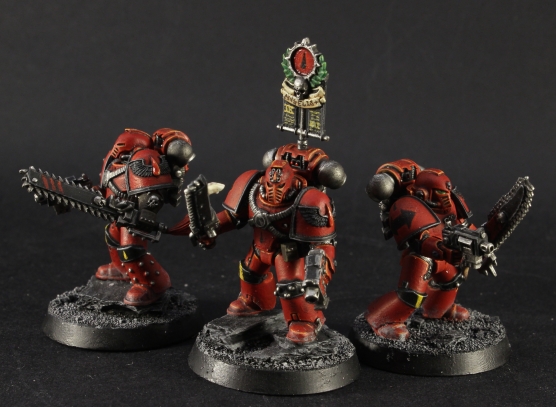 I keep looking at that Vexilla and thinking about how happy I am with it and all the details I got in there, as well as the colour choices. In truth, it was a pain to paint and the yellow text was redone several times due to it taking on odd angles but I got there in the end. In the above image, I’m still also very fond of what I call the ‘adidas sword’ – you can probably work out which one that is. 😉

The Forge World shoulder pads are really fun to work with and they work really well. I like the old school Blood Angels emblem and I’m pretty proud with how I painted them too – especially the red, gem-like blood drop. I didn’t want to go down the violet/purple drops that seem to be used in the GW range today, and so went with a red-through-orange look that has a great vibrancy to it.

Painting the tactical markings on the other shoulder pads were probably the trickiest part of the whole project. When you’re trying to make freehand like that look so uniform, you’re always up against it. It’s never quite right, but you can get it to a state where it looks good enough. If I had enough of the knobbly shoulder pads, i’d have just used them, but I’m saving the rest of those for later.

I think the bases are something to be happy about as well. They’re very simply done – just a bit of extra slate here and there, but they add uniformity, a touch of character and in some cases height too. I was almost tempted to go with the green bases with simple green flock a la 2nd Ed tradition but I think that would have been a step into nostalgia too far.

For all that I’m happy with, I never want to paint another bolt pistol or chainsword ever again. I am seriously sick of them. I know I’ve said this in the WIP posts but I would just like to reiterate given how strongly I feel on this subject. They can both do one.

My sergeant has a hand flamer and a power sword. I love the effect on the sword – red fading to black – an idea given to me by Mr Henry South. Definitely the right call. I was a bit worried about the yellow icon on the shoulder but it sits very nicely on the black field there, and though the picture doesn’t quite do it justice, there’s some good definition there as well. The sergeant also carries the nuncio vox. It’s a little annoying that they didn’t include this in the BaC box set, but you can’t have everything I suppose. As it is, I bought the upgrade set from Forge World, so I have another one for another squad in the future.

And so that’s them then. All done and on to the next project. I’m not 100% sure what that will be just yet, but I think it’ll be a single character – I don’t think I can handle another 10 man squad straight away. So the Blood Angels are very much under way, and I’m really chuffed with the start I’ve made to them. Onwards!