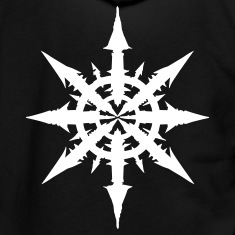 With Dark Angels and Tau getting recent rereleases, can the ever evil Chaos Space Marines be far behind? As a long time dedicated servant of the Dark Gods, I have a few ideas of what I’d like to see in the new book. These are not necessarily improvements that would turn the CSM into a tournament lock, but rather these additions would make them competitive, dangerous, and force them to live up to their own fluff as “the greatest threat”.

When I look at what Chaos Space Marines can do now, it makes me sad. Yes, there is one competitive build in the book, but that is hardly befitting of the greatest enemy of mankind. If the 13th Black Crusade campaign was run now, Abaddon’s finest wouldn’t make it out of the Eye, and if they did, they would live just long enough to hear their loyalist cousins laughingly shout ‘Grav, lol’ before being beaten back into the Empyrean. They need some help, and not knowing what the higher powers in Nottingham have up their sleeves in terms of new units, this is essentially my wishlist. I’m not saying points wouldn’t have to be upped or anything like that, but I think that with my prescribed improvements, CSM could be as great a threat on the tabletop as ever they were. Here goes…

The CC variant of Obliterators should be able to do more than just turn up and get shot to pieces. Such a great idea deserves far better rules and so here’s my idea: Mutilators get to assault the turn they deep-strike. It’s as simple as that. Make a rule and call it ‘Unrelenting Slaughter’ (or something like that) and give them the ability charge straight into the melee as soon as they pop up. These monsters need to be able to do more than just appear and get shot. Wouldn’t it be crazy if people actually took them!? 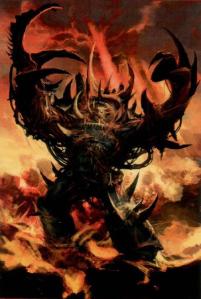 2. Bile At His most Vile

Fabius Bile is such a cool character and yet people think of him as a ‘tax’ if they want to take his enhanced Chaos Space Marines. So why not have him as being able to confer FNP to any unit he joins? It’s not a huge leap (he is/was an apothecary), but maybe make the Rod of Torment more than a walking stick too, so that he can hold things up in CC as well, and he’d be a beast. Imagine him leading a group of 20 cultists, giving them that extra saving throw and being able to reliably take on challenges. Pretty sweet, eh? 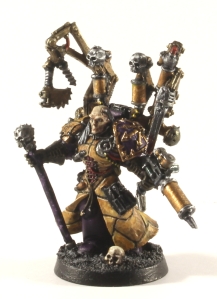 3. Initiative Means Nothing To Noise Marines

Giving Noise Marines an extra point of initiative is, well, a bit pointless. Ok, so you field them with close combat weapons but then they’re not really Noise Marines, are they? Find a fluffy way of giving them +1 ballistic skill instead and they’d be terrifying. All those sonic blasters and blastmasters hitting even more would make them truly devastating. And while we’re at it, give them a box set to have in stores as well!

Yes, Khorne have their own big ugly guy with loads of huge guns, but what about the rest of the ruinous powers? We’ve seen corrupted Knight Households in the fluff, so let’s have them in the game too. I know Forge World have their own, but one in the codex will make things all the better for Chaos. A couple of unique weapons wouldn’t go amiss either.

For any power-armour clad force, the Land Raider is still the pinnacle of transport with strong armour and firepower, and yet, while the loyalists get access to the Crusader (such a great tank), the traitors are still relying on their Twin-linked Lascannons to make a difference. It’s not a bad tank, but it’s not great, and for the points cost, you want something better than ‘meh’. How about a Land Raider sporting quad reaper cannons? Or some warp-born plasma nastiness? It would set them apart and lift them up at the same time. Winner. 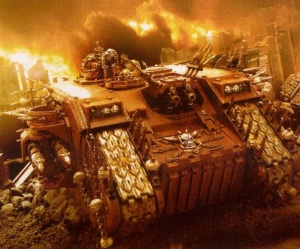 Marks for vehicles would be such a win. I was thinking of the Vindicator when I dreamt this up but this could work with all the others too. Imagine a Vindicator that had a main weapon that had a Poison profile for Nurgle, 2x the shots for Khorne, Vortex for Tzeentch and some sort of sonic boon for Slaanesh? Ok, so that’s not a perfect system, but getting something for a couple of extra points per mark would give these guys so much flavour.

7. Lucius Being Actually Eternal Would Be Nice

In his fluff, it says he never dies, so how about, any unit that kills Lucius, after a turn of him not being there he comes back as a random member of their squad? It fits with what he’s meant to be like, and would make him a truly formidable HQ choice. Kill him before turn 4, and you’re going to suffer.

It’s the hot weapon at the moment, and the CSM deserve to have it as well. If you’re rocking Power Armour, you want this in your arsenal because, in many cases, it is the only way to stay competitive. And if they can’t have Grav for whatever reason (like they couldn’t nick it off someone?!) give them access to something fun like Volkite weaponry. That’s old, and Ad Mech already brought the rules over from 30k, so why not? It fits!!

Chapter Tactics have been a great addition to the Space Marine book, so why not add them to the Chaos book? All vehicles in an Iron Warriors army get It Will Not Die. A Night Lords army can take Raptors as troops and all vehicle units gain Outflank. These are just ideas but you could get some real fun and flavour added into this book by just adding this simple mechanic.

I never see these guys getting any table time (which is a shame given that it’s a pretty cool looking model). Maulerfiends get a little more action (a little more) but these guys are MIA and they’ve only been around in one codex! The plasma shots are as fraught with danger as any other, while the assault cannon shots are just underwhelming. Give them Grav arms, or missile/D-weapon options and they might crop up a little more. 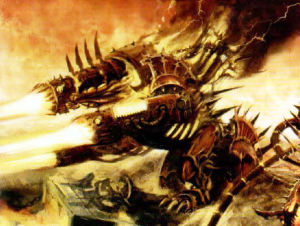 And that’s it (like that isn’t a huge ask). To make playing CSM a treat and not a punishment (yes, it really feels like that these days) again, you’d only need to implement maybe 3 of these rules. It would add variation and bonuses that the CSM book is crying out for. I’m hoping that the delayed update from GW means they get something really special, but I’m not holding my breath. I just don’t want to see Cultist Blob/Drake Spam/Obliterator Spam as the only option going forward any more. It can be fun, but if you eat nothing but vanilla ice cream, it gets to be pretty boring before too long. Which is unfair because Vanilla is a great flavour. You just need some variation. Chaos needs its Tutti Frutti.

There are a few other things I could add in here. Not having to issue/accept challenges being one of them, but I’m guessing ever long-term CSM players have their own ideas anyway. If you disagree with any of these, or have your own ideas, stick a comment below. If another ‘dex comes out soon, let’s hope we get some real rewards. Until then; Onwards!