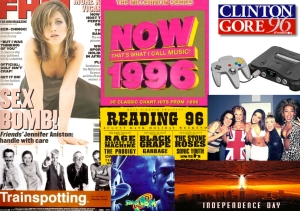 Let me take you back in time to 1996. Prince Charles and Princess Diana were getting their divorce, Britain was in the grips on the BSE crisis, Alexandria was discovered by divers in the Mediterranean and the Olympic Games were staged in Atlanta. That all seems like so, so long ago. Just look at what was hot in that image above!

For much of the year, I was but 12 years of age and was just about discovering the idea of playing sports. Girls were starting to get quite interesting too. It was the tail end of my childhood and my love for Warhammer 40,000 was on the wain a bit. Codex Chaos kept me gripped for a little longer but really, my first foray into the hobby was coming to a close. One of the miniatures I bought in that bygone year was one Fabius Bile and I’m afraid I didn’t do a very good job of him. 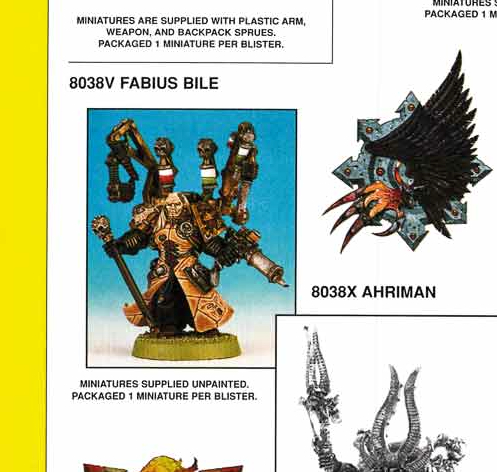 I have no pictures of the Fabius model I painted from that time (probably a good thing). I remember him leading my Emperor’s Children (lots of Noise Marines and Predators) alongside N’kari (A very badly glued together scratch built thing) into 3rd Edition games of 40k, but I also remember how he looked – terrible. He was painted with a lot of enthusiasm but very little skill and that has been weighing on me for a while now. He wasn’t quite humbrol dipped like some of my earlier attempts, but he certainly wasn’t good. Flat colours, details lost in thick, gloopy strokes and he was just generally quite bad. I remember not even being proud of him myself then and that was rare despite my complete lack of skill.

Anyway, now that I’m older and wiser and considerably better at painting, it’s time for me to finally do right by Fabius Bile and so last week I ordered him and yesterday I picked him up from my local GW store. But why do I care so much about this guy? Well, he just ticks all the boxes I can think over to make him one of the 41st millennium’s most glorious villains. Let’s run through some stuff now: 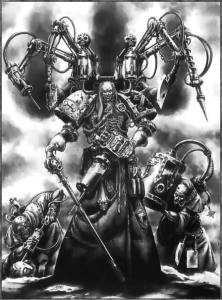 1. He’s a mad freakin’ scientist. This dude makes Frankenstein look like an amateur too. He saw what the Emperor had done with the Space Marines and said ‘Yeah, it’s ok I guess, but let me show you how to do it properly’ and that brought about, among other things, the Noise Marines themselves. And that’s just totally awesome.

2. He’s Emperor’s Children (my faves). In the 41st millennium, he doesn’t really care who he works for, but there’s still a hint of that regal purple armour going on. His back story in the Black Library’s Heresy books has given him a whole new dimension and witnessing his hubris is just so much fun.

3. All of his wargear is boss. Who else is carrying a Xyclos needler these days? No one. Oh, look at you sweet little apothecaries with your Narthecium thingies. Sorry? Oh, this? Yeah, this is a Chirurgeon and it is like a billion times more awesome than what you have but whatevs. Let me just beat you with my Rod Of (freakin’) torment a little and you might understand. Winner.

4. The dude tried to clone Horus. In fact, he pretty much succeeded and were it not for Abaddon having a little hissy fit, the Big H MkII might be leading the Black Crusades today. Not only that but he even managed to steal a phial of Sanguinius’ blood from right under the nose of Dante. How brazen is that!? 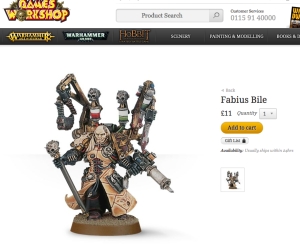 I could give you more reasons but sufficed to say, I love this character and I want to do him some proper justice too. That illustration a little higher up this post is what I want to conjure up. That’s why the next thing you see from me here will be Fabius Bile done in my own style and to a level that will hopefully do him some justice. Stay tuned for updates – I hope to have him up here soon!

Also, when I was picking out Fabius from the characters on the GW store, I noticed a few old faces that I also butchered back in my youth, so if this goes well, I might do a couple more too. Onwards!

3 comments on “Fabius Bile – An Old Debt To Pay”