Posted by johnnya10 on 26/03/2015
Posted in: My Painting and Modelling. Tagged: devestators, Mortifactors, Space Marines. 1 Comment 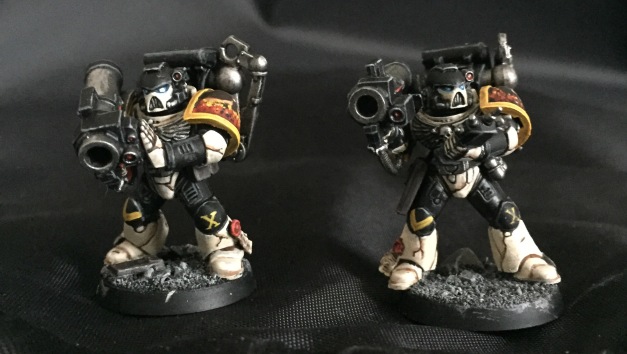 It’s only taken three weeks to do these two (I told you I was going slowly at the moment) but I’m pretty pleased with these guys – the first of my Mortifactors Devestators.

I’d like to start by saying that the phrase ‘Mortifactors Devestators’ is something i find very enjoyable. It rolls off the tongue in a delightfully death-filled sort of way, and I appreciate that. Eventually they will be a squad of 10 (some time around August if my current slow work rate continues), but the first two are done and these are the guys I’m pointing out today. 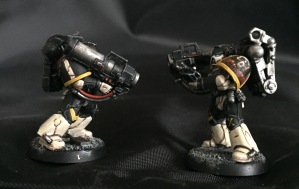 With regards to the Devestator kit, as previously mentioned, it is showing its age. It is full of seams and very static, but it’s still pretty fun to play around with. Of course, you only get one missile launcher with the kit, so the second one was a spare from one of the tactical squads I’v worked on. Mixing up the kits like this has its benefits – Space Marines have to do a lot of ‘make do and mend’ within their chapters and the likelihood of them having 10 or even two identical weapons drops due to myriad reasons. The weapons do look slightly different and the changes are subtle enough that you only spot them if you’re looking.

For the Mortifactors Devestator squad marking, I’ve gone for a vertical line in bone on a black background on the right shoulder. Yes, that is very simple, but their other shoulders will all be skulls and flames (in my previous notes on their heraldry, I noted that heavy weapons training earns them the right to add a fiery design to their skull) so there’s enough to mark them out. 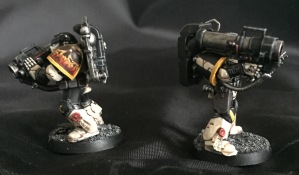 I’ve always been a big fan of missile launchers as heavy weapons, and though I haven’t included any in the tactical squads I’ve done so far, I’m glad I included them here. This Devestator Squad may be called on to offer some AA support in the future and having the option to add some flakk missiles is a nice thing to have, even if I don’t use it. When not called upon for that role, there’s still the armour-cracking strength of krak, and if any angry mobs start heading in your direction, you can frag them too. It’s versatile, but uncompromising, and that’s why it’s in here. 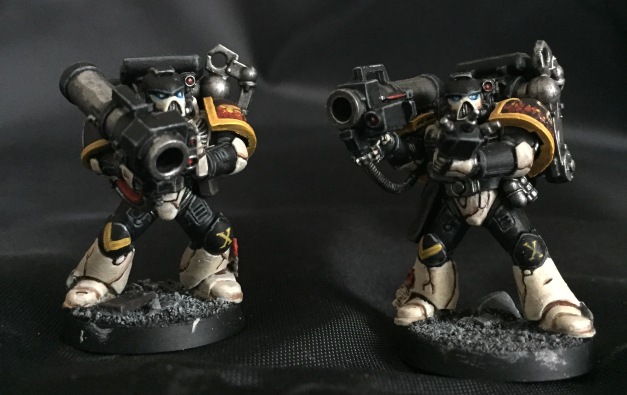 I may plough on with the rest of this squad, or I may mix things up a bit next, before working on the next two heavy weapons. Not sure yet, but keep an eye on this blog to find out what’s next! 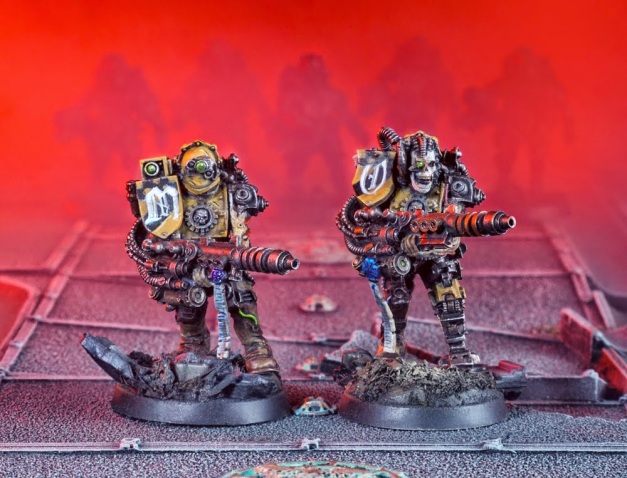 My good friend, Henry South (of 4gotowar.blogspot.co.uk), is offering you a great chance to support a noble cause and get your hands on some amazing things too. Henry and I were both very much inspired by Terry Pratchett when we were young and to this day we are both avid readers and quoters (I can still make him giggle with my Nanny Ogg impression) of this extraordinary man’s work. Well, Henry put up a couple of his models (which have appeared in Blanchitsu in Visions! – shown above) to be won and all you have to do to enter this raffle is make a donation via this just giving page. The money goes to the Alzheimer’s Society who provide care for those who suffer from what Sir Terry called the ’embuggerance’ of Alzhaimer’s disease, and also goes towards research to help fight it. And just to sway you even more to give, John Blanche has also contributed the original illustration below to Henry’s efforts. 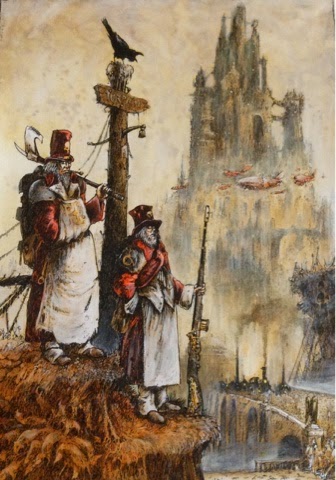 It’s like Fred and Nobby in the 41st Millennium.

Many other fine painters have put their work in too, so you could end up with several amazing models, and/or a John Blanche original and all you have to do is give to charity. Not bad, eh? There will be three winners and the draw will take place on April 28th. Please give what you can and use the link above.