Posted by johnnya10 on 12/03/2015
Posted in: My Painting and Modelling. Tagged: Mortifactors, Relic. Leave a comment

I’ve got a bit of a bee in my bonnet at the moment about how long it seems to be taking me to get stuff done and the lack of my own original work coming up on this blog. When I had hours and hours to paint, I seemed to be getting something new up every week but that has not been the case of late, and in an effort to prove (as much to myself as to you) that I am still in the game, I thought I’d show you some of the stuff that I’m working on. Starting with, happily, something that’s completed! Yay!

This is the first member of the Adepta Sororitas that I’ve worked on in decades (has it really been that long!?), and it’s also a return to a project I kicked off months ago too. Firstly, apologies for the rubbish shots – didn’t have much time to fire these photos off so resorted to the iPhone and was instantly reminded about why I splashed for a DSLR at the end of last year. When painting this over the last couple of days, I was also reminded about how much I hate painting this weird rubber stuff that FFG use for these busts and its own general hatred of paint and being painted.

However, in the flesh, this looks a lot better and I’m very happy with it. It’s the 5th piece I’ve done for the game and that means I’m half way through this project. One day, I’ll actually get a game in, which will be nice. Also, when they’re all done, I’ll fire off some shots that do them justice.

The Golden Hour – Finding Time to Paint my Devestators

If you can’t find time, make time. Not a bad adage to live by during the times when you can’t seem to find a second to get any painting done. And because of that, I am now waking up one hour earlier every day, and using that time to paint. I’m calling it the Golden Hour because not only is it lighter in the morning now, it’s ensuring that I start the day with a creative burst and a smile on my face. If you can do it, I recommend it because it really is quite energising.

It’s already paying dividends and, as you can see from the snap above, one Devestator is done and the second one is under way. In fact, that second one is coming along really nicely now and this approach is really starting to move things along at a far more acceptable pace. I’ll do a bit more of a write-up on these guys next week when (hopefully) I have another one finished.

One thing that I’m already appreciating is how far Space Marine kits have come since these Devs were first brought out. Having worked on the new tactical squads and the Vanguard Vets recently, I took my eye off the ball a bit when it came to looking for casting faults, because those new kits have none. These older kits though, well, there are seams and joins everywhere, and some bits really don’t sit flush against other bits… basically, there’s a fair bit of rescuing happening as I go along which could have been avoided had I been more vigilant. Lesson learned for next time. 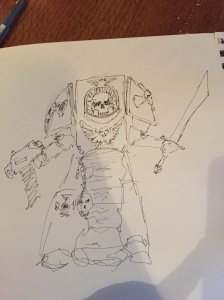 This one’s coming up soon – my Mortifactors First Captain. I thought I’d share with you a quick sketch and some of the inspiration for him. Yes, it’s technically based on the Terminator Chaplain, but when you’re delaing with Mortifactors, everything has skulls, not just Chaplains. A couple of minor adjustments/conversions and he should be ready for painting relatively soon too. Here he is ready to get worked on: 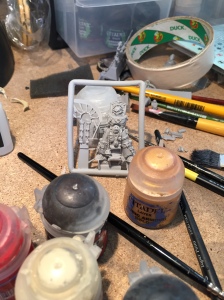 There. I am doing stuff. Get off my back. Not that you were on it anyway. But whatever. Onwards!