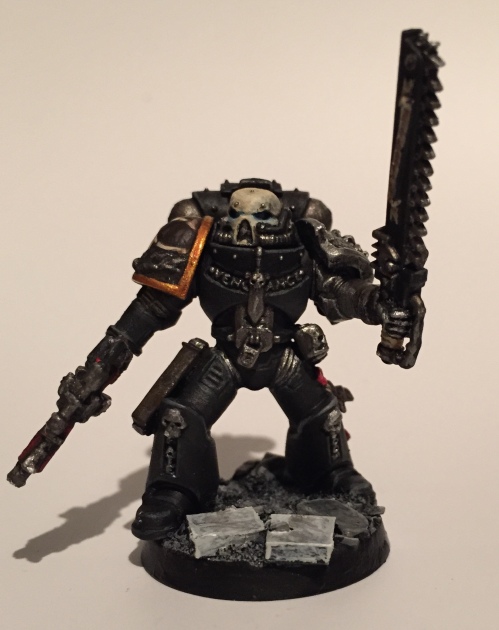 “… but we do not consider you to have deserted us, Exadon. You are fulfilling your duty, as prescribed by your own meditations, and confirmed by those of your company Chaplain. The more you learn of the Xenos threats in this part of the galaxy, the greater our strength will grow upon your return. Study your companions in this Inquisitor’s retinue as you would study your foes, and remember that one day you will almost certainly be called upon to despatch them or their kind. Know their weaknesses and their strengths as you know your own. The Emperor and Tezuka walk with you, and your brothers remember you in their oaths.”

The fourth member of my Ordo Xenos team for INQ28 is now done, and I went with a bit of a classic – a Space marine of the Deathwatch. And guess which Chapter he’s come from. 😉 Well, I couldn’t not have a Mortifactor in there somewhere, could I? Welcome, Brother Exadon.

This isn’t so much of a conversion as a straight up ‘kitbash’. The only time any converting was done was to change the sword to be held in a left hand rather than the right. Quite a lot of kits went into making this one though, so I should run through them here. The legs, torso and backpack come from the Grey Knights box, the helmet comes from the Chaos Space Marines box (Heretic!), the gun and Deathwatch shoulder guard come from the Deathwatch accessories kit, the chainsword comes from the Vanguard Veterans kit and I think both arms are from the Space Marines Tactical Squad box. How’s that for an informative run-on sentence?

The painting was a relatively simple affair too when you get down to it. Apart from the silver arm, the red gun and the bone coloured skull, it was pretty much a case of painting black with a few details here and there. But the silver arm is a good thing to look at because it highlights how I’ve changed the way I highlight with the minis in this INQ28 project. There is far less focus on basic edging and doing a lot more painting looking from the top down. Edges still often get highlighted, but only if they’d actually pick up light from light source directly above them. I don’t think I explained that particularly well and the photos don’t do this much justice here (can’t wait for that new camera) but it’s definitely a very different approach.

And of course the other shoulder has a skull, but you’ll have seen quite a few of those on this blog before so I won’t go on about it.

The Deathwatch are pretty darn cool. Elite even by Space Marine standards and drawn from every chapter, they are all unique and get to use some pretty special wargear, not least that bolter. The Mortifactors have always been a chapter that particularly dislike Xenos and supply an unusually large number of warriors to the Deathwatch. Brother Exadon joined the ranks of the Deathwatch years ago, but in his meditations, he saw an image of Inquisitor Joshan, stood beside a great dark figure, shrouded in shadow. He has now become Joshan’s personal bodyguard and the access he has to the Inquisitor gives him the opportunity to learn more about the aliens that threaten the Imperium, and also to follow his vision.

So now that I have the big, burly Deathwatch Marine done (along with the cursed Eldar, the last true Hrud and a half human/half ork mutant), I think it’s about time I started work on the Inquisitor himself. He’s up next, so stay tuned for the final part of this warband for this year!