Posted by johnnya10 on 09/04/2014
Posted in: Silliness and Stuff. Tagged: hobby injuries. Leave a comment 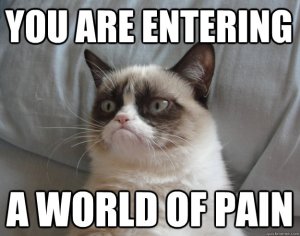 On saturday, as many will know from my previous posts, I put the finishing touches on my Mortifactors Vanguard Veterans. What I didn’t tell you was that I also ended up with an injury. Perhaps it’s because I’m not as young as I used to be. Perhaps it’s the brush I was using. Whatever it was though, I ended the day with what I am calling Painter’s Finger. 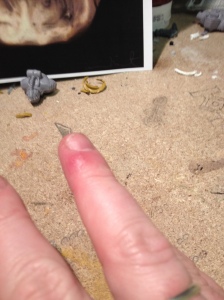 Looks nice, eh? By the end of the day, having painted solidly for a number of hours, I had a nasty little sore on my finger. The metal of my paintbrush rubbing against it over the hours actually made it red raw. It’s still a little sore now actually so I’m still taking it easy on the actual painting at the moment. Oddly though, it’s not the first injury I’ve ever suffered at the hands of the hobby, and certainly not the most impressive. Let me tell you the tale of Stanley’s Revenge…

As one does in this hobby, I have amassed a small collection of tools that are used for various purposes from removing bits from sprues to sculpting green stuff and more. Among this arsenal is a Stanley Knife. Now, I have far more delicate craft knives too, and some very small, thin saw blades, but on occasion, I will go to the big ol’ evil looking Stanley Knife. It actually has some good traits as its heft and ultra sharp blade are particularly good at working through the thicker parts of Forge World resin. 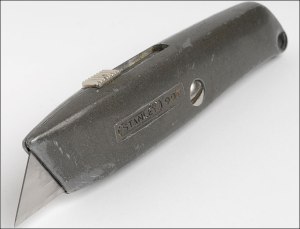 One night a couple of years ago, I was happily trying to cut through the last bit of the self same resin which had mainly been sawed but the last bit was a tad fiddly so I went for Stanley. Somehow, mainly due to my own stupidity, I ended up with the tip of the viciously sharp knife pointed at the thumb of my other hand. I slipped slightly, with not too much force, and yet enough to drive the tip of that knife deep into my thumb. Just next to the nail.

I remember sticking my thumb into my mouth, grabbing some tissues and a hairband for a tourniquet (one of the rare benefits of being a long hair as I was in those days) and rushing into the bathroom. When I took my thumb out of my mouth, a lot of blood fell out too. I ended up running to the taxi rank up the road and heading to A&E (or the ER if you’re Americanly inclined). It needed man stitches but I ended up with butterfly stitches because the cut was too close to my nail for the needle to go in. How much did you just flinch? 😉

Needless to say, Stanley gets a lot less use these days and when I decide that that is indeed the tool for the job, I am damn careful with it. If you want an example of either ‘don’t play with knives’, ‘use the right tool for the job’ or just ‘don’t be a prat’, well, that’s a good’un for all three. I’m well aware of how much of an idiot I was so we can skip past those remarks, thanks. 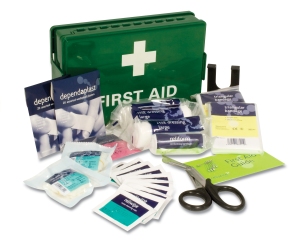 What I want to know is, how much have you suffered for the hobby? Have you ever done something that you just thought was so dumb in hindsight that ended with a trip to hospital? Or acquired an injury through your work with the hobby? Ok, it’s not like swimming with sharks or cliff diving, but those little plastic men are dangerous! Oh, and one last example that’s a good warning: I met a guy a couple of weeks back who mentioned that after ten years of sitting hunched over his minis while painting, he’s now having to go to physiotherapy twice a week because his back is ruined. Sit up straight people!

Have you injured yourself while indulging in the hobby? Leave a comment below and, if we get enough, I’ll think about starting a support group.