Posted by johnnya10 on 15/04/2014
Posted in: My Painting and Modelling. Tagged: guardsman, Relic. Leave a comment

The latest job done is the Imperial Guardsman from the Relic Boxed Game from Fantasy Flight and Games Workshop. I’m getting the hang of painting these now and I’m really happy with the way this one came out though I am totally going to blame the camera here because these pictures don’t do him any justice. I was a bit rushed and I can also report that the Ogryn is done now too, but I just haven’t had the chance to photograph that at all. Basically, real life is getting in the way of my hobby at the moment so I can’t promise my usual frequency of updating this blog, though I’m going to try!

I was really happy with the skin and flesh tones on this guy. I think I’ve ended up being quite good at painting skin but I don’t get that many chances to do it these days due to all the Power Armour that I’m involved with, so it’s good to get a go with it. The other thing about this bust that I’m really happy about is the vest – both the shading, and also making it grubby. There are a few blood splatters (though subtly done) and a bit of dirt/grease on there too which really captures the down and dirty nature of being a grunt in this Emperor’s Imperial Guard but isn’t too OTT. He’s based on a Catachan so I’ve even given him a tattoo denoting that as well. It’s not exactly elaborate, but it’s in the functional style that an army of billions would probably rely on.

Anyway, here are some more pictures. More will follow with a better camera when I get the chance, but as mentioned, I may not get a chance to do much over the coming weeks. However, I shall endeavour to continue to keep you up to date with what I do get an opportunity to complete. Onwards! 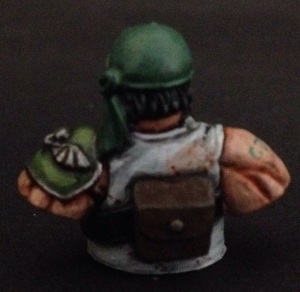