Posted by johnnya10 on 20/02/2014
Posted in: My Painting and Modelling. Tagged: Mortifactors, Rhino, Space Marines. Leave a comment 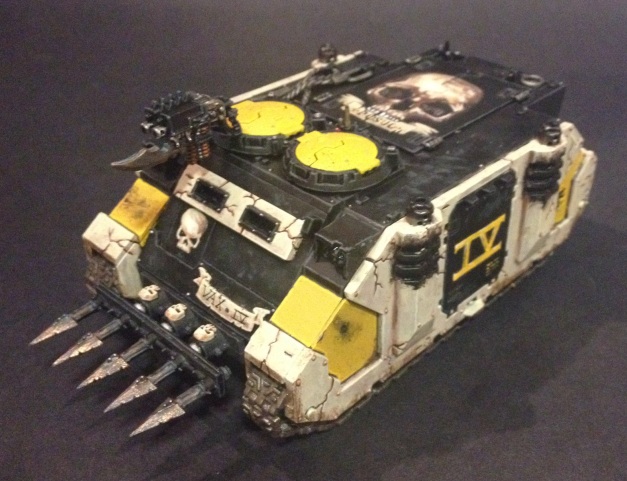 Last night I added the last bits of edge highlighting to the storm bolter that sits atop the turret of this tank and so I can now say that my Mortifactors Rhino is now finished. And I’m really happy with this one.

I’ve never had that much fun painting Rhinos before. I don’t know if it’s the big areas that are lacking details or the fact that I’ve always tried to paint them quite clean, but they’ve never popped. This one pops (if I do say so myself). Of course, it’s helped greatly by a piece of free hand that I’m really, really proud of. If you couldn’t guess from the image above, it’s this bit: 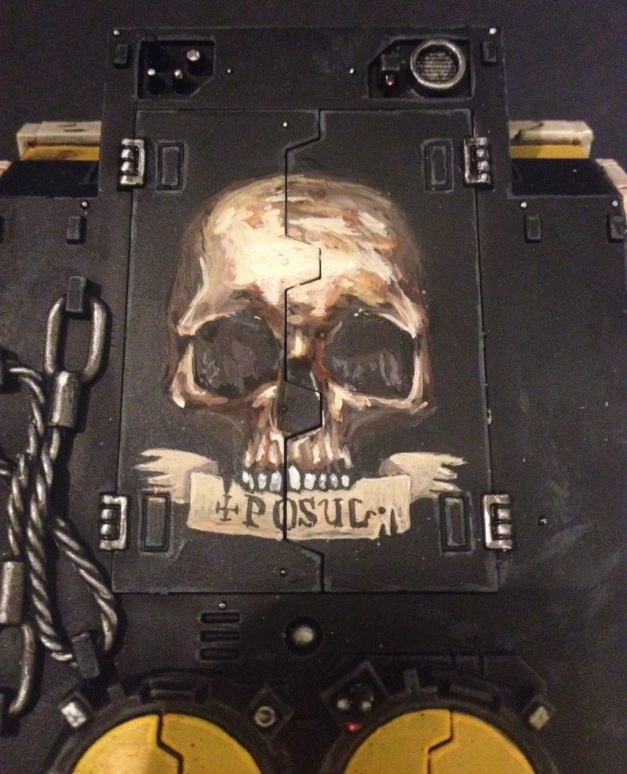 For the skull, I built up from Rhinox Hyde, through Screaming Skull to White Scar, then blended in a tiny amount of yellow, covered it all Reikland Flesh Shade to give it some warmth, and then built up again with a similar pallet. As it’s one of my personal goals to work on my freehand this year, I’m really pleased with how this came out. Though, as you’ll see below, the numeral on the side door wasn’t quite as successful – it looks a bit too human and I may revisit it later to try and ‘fix’ it.

Other parts of the tank that I’m really happy with include the weathering, which is subtle and perhaps indicative of the vehicle being only recently deployed (which I’m cool with). And painting this made me really enthused for this paint-scheme again. The sombre, even morbid tones of black and bone, accented with the violence of that yellow… Wow. I just reread the last couple of sentences. That sounded really gittish, right? Sorry. I sit very near a design team at work and have to listen to stuff like that all the time! Just count your blessings that I didn’t start going on about ‘stark industrial shapes’ and stuff like that. Anyway, you’ll also note the use of pieces from the Chaos Rhino kit which I used because a) it captures the borderline heretical nature of the Mortifactors chapter and b) more skulls.

Anyway, here are plenty more pictures for you. I hope you enjoy them. The tank was assembled and then undercoated black. It was painted using Citadel Paints using a variety of brushes. 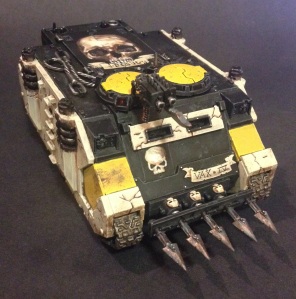 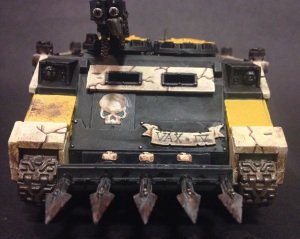 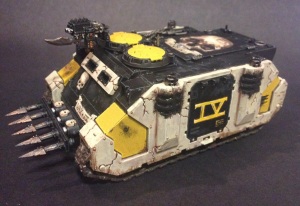 Comments? Questions? Please add them below!