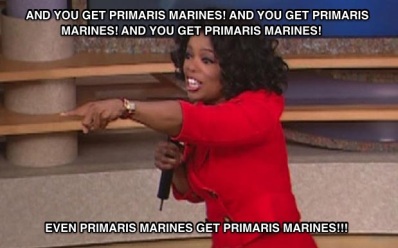 As a bit of fun, and because we’re just a couple of days away from the release of Warhammer 40,000 8th Edition, I have put together two new name generators to help you do just that – generate some names. As well as the Primaris Marine Chapter Name Generator, there’s a Death Guard War Band Name Generator too – how’s that for a slice of fried adamantium?!

Let’s start off with the “Good” guys; The Primaris Marines. Now of course, you can add these hulking, super-sized killing machines to any existing chapter, from Blood Angels to Space Wolves, from Nova Marines to Howling Griffins, but if you’re one of the people thinking about collecting a brand new chapter, made purely of Primaris Marines, you can do that too. And that’s where this name generator comes in. As with before in the classic marine variant, you take your initials to get your chapter name. Here’s it is:

Now, I’ll come clean, there are some repetitions in there from the original because some of the more high-scoring-in-scrabble letters just don’t have that many useful words. You shouldn’t get something completely the same, but if you do, try using your middle initial, or the name of a loved one instead. As my initials are JRA, I would be the ‘Jade Avengers’ but if I wanted to change things up a little, I could always switch to ‘Jade Redeemers’ or ‘Revenant Avengers’. What did you get? And how do you like it?

And now for the really fun one; the Nurgle Name Generator. If you’re starting a new Nurgle marine force and you don’t want to go with the Death Guard or any of the other existing War Bands that venerate the generous Grandfather, here’s a war band name generator for you: 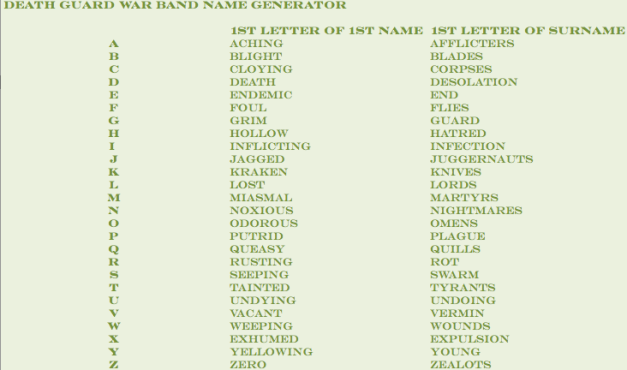 Sorry to all the Dave Greens in this world – you’re stuck with it. It was so much fun coming up with this one. All those lovely, plague-ridden words. Everything should sound gribbly, rotten, horrible and gross. In this iteration, I would be building the ‘Jagged Afflicters’ War Band, but if I wasn’t too happy with that (I am – I may well work on those soon!), then I could go with The ‘Jagged Rot’ or even ‘Rusting Afflicters’. How about you? Have you found something suitably gross and disgusting?
I hope you had fun with those – I certainly enjoyed making them. And it definitely helped me stave off the ravenous hunger I have to get hold of the 8th Box set. Speaking of which, I’m likely picking it up on Sunday, but will do a review for it here next week. Onwards!
=][=
Update: The very clever and talented Dan at Ritual Miniatures has created a far prettier and slightly more randomised version of these Name Generators over at his site. Check out his name generator now!