Does 40k Have Too Many Armies? Let’s Discuss

Posted by johnnya10 on 28/09/2016
Posted in: Thoughts and Comment, Uncategorized. Tagged: armies. 2 Comments

Take a look at this image: 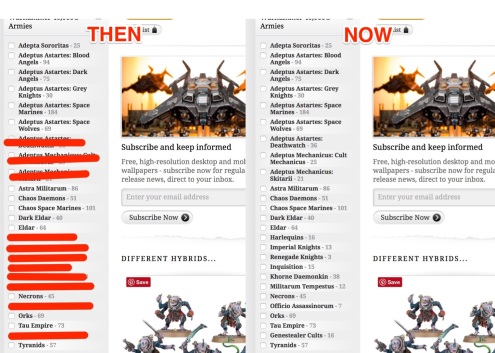 Here we see the list of armies we had only a couple of years ago, and what we have now. Just a couple of years ago, we had half the amount of armies available to us that we do now. Ok, so some of them should probably have an asterisk next to their name. We always had the Inquisition and the Assassins, but they were rolled in the Grey Knights book. And are the renegade knights really an army in the truest sense? Really, yes, but I know you know what I mean here.

Whether they’ve been brought out of other Codexes, or if they only have a model or two, the fact remains that if you want to put an army together, you have twice as many options as you did only a couple of years back. I swear it wasn’t more than a few months ago that I was thinking of Tau as still being the new kids on the block, and yet now, they seem quite ancient in comparison to many of the young pup races and factions that have since popped up. Get those fish men a zimmer frame!
So the question is this; Are there too many armies in Warhammer 40,000? And the follow up question goes thusly; Can you have too many armies in a game like this? Let’s look at the pros and cons. 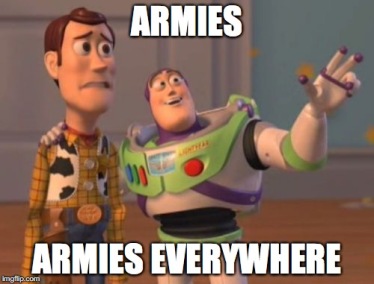 The most prominent pro is that we now have a fantastic array of choices available to us. You can play any of these armies and some won’t even cost you that much to get into. From hordes to elite armies, whatever you want can be yours. What’s more, they’ve done this by not inventing new things, but rather by going back and bringing so many old units and armies from epic scale (like the Imperial Knights) or older editions (Genestealer Cults) into the modern setting. They’ve also given rules to things that didn’t have them before, issued combinations of other armies, and even given us supplements to work with. There really isn’t much left they could do to improve our choices even further.
What’s more, this widening of the range is allowing many of the designers and sculptors to let their imaginations run wild. From innovative rules systems and army builds to the miniatures themselves, the people GW are paying for their imagination and inspiration are being allowed to truly express themselves in these miniatures and codices. Not only that, but their imagination is being turned to reimagining some of the older armies and bringing them into line with modern standards.
The last major pro comes on the battlefield. It was getting tiresome taking on the same old armies whereas now, between these added armies and the allies system, we’re getting a wide variety of opponents and we can’t be sure what we’ll get facing us across the tabletop. Yes, some will always play the power game, but for those of us unconcerned with such things, we get to pit our treasured armies against a wealth of varied lists. It’s a great time to be playing the game.

In terms of the cons, there are a couple that could be argued for as well. Heading straight back to the battlefield, keeping track of all the rules that come with each army is, for many, approaching the impossible. Between formations, detachments, unique weapon profiles and of course all the individual units, vehicles and characters having their own rules, the game has become very confusing. Of course, this can be negated by having a flick through of your opponent’s codex before a game, but that’s not ideal for those who count gaming as the core of their hobby. For those that like to know all the rules, we’re approaching an advanced degree’s level of learning to get them all down.
Between the release schedule’s limitations and those imposed by the practicalities of running a miniatures company, these added armies mean a lot of the older ones aren’t getting their updates. While having Deathwatch and Genestealer Cults is all well and good, non-Khorne Chaos, Ork, Dark Eldar and Grey Knights players are all rather desperate for an update to bring them to a competitive level rules-wise and a few new sculpts and units would be rather nice as well. A proper box of Chaos cultists, Plastic Stormboyz… who knows what was denied to us because of the new kids on the block? 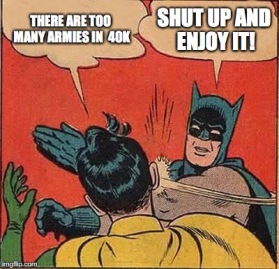 Personally, I believe that the pros of this approach far outweigh the cons. I’m a huge fan of the direction that 40k is going in right now, and all of the new armies seem really fun. It’s never been easier to find miniatures to convert, the setting is now vibrant and varied and we seem to be getting something exciting every month – it’s great! But then I’m not so much of a gamer these days and I have heard and read whispers of discontent from those who like to know exactly what sort of armies they’re going to be facing. I don’t especially see this as an issue but I know some do. Others feel that the shelves are getting overcrowded while I see it as a blessing – variety is the spice of life and there’s just so much to be inspired by now. Whatever’s your poison, there’s something for you. It’s a great time to be enjoying the hobby.
Will we ever reach a point where there are too many armies? To be honest, I don’t think we will. We’re getting to the point where there just isn’t enough left to bring in that will make it an issue. I doubt the Custodes will get a full Codex when they’re released. I doubt we’ll see Exodite Eldar or Squats (sorry) from GW. Even if the chaps in Nottingham can squeeze out one or two more armies, I don’t think that’ll be too many. And I’m sure GW know that once we’re all hooked, they can start rereleasing updated models more often and new codices – they’ll keep us spending even without bringing out new armies.
What’s more, relatively good sources assure me that we’ll be seeing new Sisters of Battle in one guise or another within 9 months. Yes, I know, ‘reset the clock’, etc. But think more of a boxed game release than a full army rerelease. For me, that’s great news. And who knows, maybe before we have that, we’ll have some lizardmen from space, some alien cat-people and a codex for the Imperial Fists alone. Who knows!?! I’m just enjoying the ride. Are you?

2 comments on “Does 40k Have Too Many Armies? Let’s Discuss”