Getting Rid Of The Grey, In May. Also, I’m In Visions!

Posted by johnnya10 on 06/05/2015
Posted in: My Painting and Modelling, Thoughts and Comment. 2 Comments 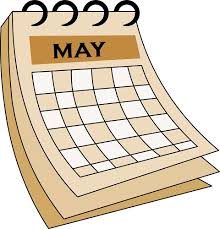 It’s time to get rid of the grey. No, this blog has not transformed into a male grooming affair; I am of course referring to the Grey Tide, and all the horrors that sale within her. I’ve noticed that I’ve collected rather a sizeable amount of unpainted or half-painted plastic over the last few months, and it’s high time I did something about it. To that end, here be my resolution: No purchases of minis in May allowed – it’s time to tackle the tide and display a little self control.

Aside from benefitting my budget and bank balance, this is also a matter of pride and guilt. I always used to pride myself on having no unpainted piles on my desk and now I seem to have accrued several hundred points of the damn stuff, and that’s simply not on. I also feel a little guilty about it – this isn’t a cheap hobby and the thought of things going to waste is abhorrent to me. Just take a look at this image: 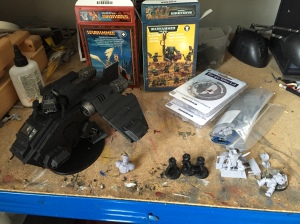 What we have here is a shameful scene depicting just some of what needs doing at the moment. There’s the Stormraven and the Devestators which are still no closer to completion than they were the last time I put them up here. There’s also a box o’ grots and a couple of Empire Battle Wizards which I bought a while ago for reasons I don’t really remember. There’s also a couple of Legion Praetors, a Legion command squad, some boarding shields and a Tau battle suit all from Forge World. There’s even a bust from Relic – one of five that I’ve got left to paint. Not pictured are a Forgeworld Nurgle Daemon Prince, a Solitaire, two Ork Mega Nobs that I owe to a friend, and half the Dark Vengeance starter set!!

Oh, the shame! How the mighty have fallen by virtue of impulse purchases, forgotten plans and good intentions. I only meant to paint, not imprison these poor, poor miniatures in my flat, unassembled and unloved.

Well, no more! This month, I’m hoping that you’ll be seeing me work studiously through these. I can’t promise that I’ll get everything done, but I want to at least make a dent. So keep watching this space in May – I hope to have plenty of updates for you.

Now, my super-happy big news of the week is my first ever appearance in a GW publication! I was grinning from ear to ear this weekend after I saw my Mortifactors Vanguard Veterans appear in Warhammer Visions 16. I took these guys up to Golden Demon in Coventry last year and they’ve now appeared in print and that is a great big dollop of awesome-sauce as far as I’m concerned. If 11 year old me had known that one day he’d be good enough at painting to get in to something like this, he’d have been giddy with joy. 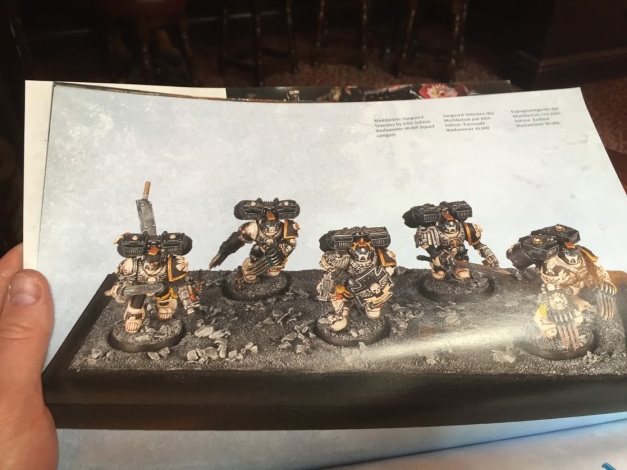 They may not have won on the day (and as you can see in the rest of the mag, the competition was fierce to say the least), or even placed, but I’m feeling chuffed, stoked and downright delighted with this. Maybe some of what I work on in May will come with me to the next Golden Demon…? Stay tuned to find out. Onwards!

2 comments on “Getting Rid Of The Grey, In May. Also, I’m In Visions!”