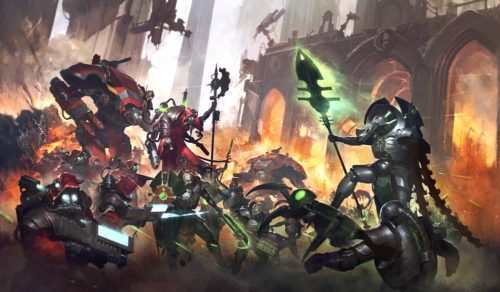 This week, we’ve been treated to some early pictures of the upcoming Forgebane box set that sees the Martians and their “diddy knights” take on the undead cyber-Egyptians that are the Necrons. It looks like an amazing box, and I dare say I’ll be picking up a copy if only for the duo of diddy knights (yes, that’s what I’m calling them, get used to it). But it brings up an interesting question; if someone came up to you and said “What ho, old chap. One’s looking to get in on this Warhammer 40,000 malarky, but one was wondering how best to start. Any advice, sport?” (your friends may use a different vernacular) what would you say?

In my youth (back in the good old days as highlighted above), it usually went something like this: You bought a blister pack of lead space marines, and maybe a couple of paints (because you were pretty sure you could use felt tips, poster paint, that old airfix paint your dad bought you ages ago, and whatever else wet and colourful you had lying around). You’d slap it all together, do a bit of ‘pew-pew-ing’ with your mates and then buy more and more over time. Eventually, you’d get interested enough that you saved up pocket money to afford a box set which was full of these long, confusing books (the confusing numbers and words didn’t matter though because they had really cool pictures) and loads more space marines and some baddies, and you’d sort of muddle through from there. Patient GW staff at the local store would walk you through rules you’d forget and then one day, in the vague future, you’d know how to play (sort of).

But what must it be like today? Now you walk into a shiny, new Warhammer store, where the charming and friendly person there enthusiastically accosts you and asks what you’d like to play with the cartoon dollar signs in their eyes barely disguised. What options you’d have! First Strike and Know No Fear offer you smaller gateways to the game, while Dark Imperium is still a viable option. There are small starter paint sets, small starter armies and even more boxes of games that will give you miniatures and ways into the 40k Universe. Stormcloud Attack, Deathwatch overkill, Betrayal At Calth, Shadow War Armageddon, Gangs of Comorragh and Lost Patrol all offer the new player a flavour of fun to suit their tastes, and soon, Forgebane will join this growing list of gateway games.
What am I getting at here? Well, I think GW deserve a bit of praise here for a very canny approach to their boxed sets. In my day *clutches cane, adjusts thick glasses, looks wistfully back at yesteryear* (oh, God! What happened to my Youth!?) you just had a big expensive box which my mum, like so many other parents around the world, had to help me out with in financial terms, despite my saved pennies. But now, for the same price as a video game, you can get a big shiny box with space marines and scary space marines and some boards to play it on. For a mere tenner, you can get a little set of paints and a brush that will do all you need them to do as you’re starting out, and everything is easier, and better, and less stressful. This is GW’s malevolent genius at its best, and with Forgebane, it’s got a real winner on its hands. 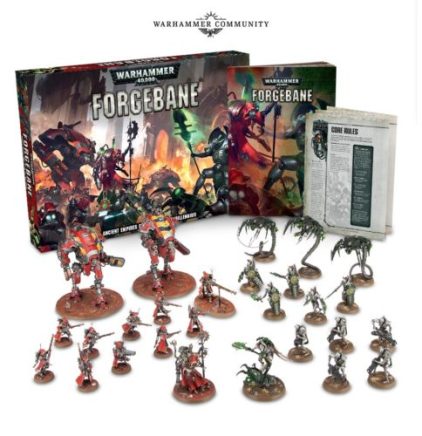 You get two armies which you can paint with minimal paints – both of them could pretty much just be silver, so the newbies can cope, but both armies can be made to look amazing by more experienced artists too. The new kids get knights, which are big and stompy and awesome, while old hands get a new type of knight to bolster their expensive collection of giant killing machines. Necron players of old also get a new character model, and some useful minis to bolster their existing forces too. This won’t be the cheapest of boxes, but it still won’t be far off the mark of a videogame – certainly less than 2 of them. And cunningly, there’s no blood. We veterans of the grimdark may know of the Necrons’ dark and devious past, and of the sinister ways in which the Mechanicum achieve perfection through augmentation, but to parents buying a game for their kids, it’s good robots vs bad robots, which is a lot less scary than talk of dark Gods, corpse emperors, ubermensch super soldiers, plagues, torture and all the other delightful stuff that makes 40K so fun. Add into this mix the fact that 8th Edition is far easier to learn and play, and we’ve got a seriously good entry game right here.

This release has been very well thought out, and I’m looking forward to seeing it hit the shelves in the near future. It will then of course spend many years in the swells and eddies of my grey tide, but them’s the breaks. But it really is a GW masterstroke in my opinion. I wouldn’t mind a few more boxes like this seeing the light of day in the coming years, and I’m sure it will lure many new hobby enthusiasts to the tables. Nice one, GW. Onwards!
Will you be picking up Forgebane? Will you also be calling them Diddy Knights? How’s the weather where you are? Let me know in the comments section below!

3 comments on “Forgebane – A GW Masterstroke?”