It’s Been Quiet Around Here. Too Quiet…

Posted by johnnya10 on 28/09/2017
Posted in: Thoughts and Comment. Leave a comment
It has been quiet on Heresy & Heroes lately and I just wanted to let you know that normal service will be resumed soon. I’ve written extensively in the past about my breaks from the hobby and I know that we all go through quiet patches, so I thought I’d let you know what I’ve been up to in these quiet weeks.

We’ll start with the actual miniatures. Not much has been done, I have to admit. I have half base-coated a single Black Orc for my Blood Bowl Team, and started work on a third Rhino for my Blood Angels. The Blood Bowl team needs finishing soon – I have games to play, and more pieces to add to the team, but more importantly, with Necromunda coming out soon, I don’t want to still be working on Blood Bowl!
The Rhino, which I’m calling a Mk1.1 Metalica Pattern Rhino is for my veteran squad, and as you can see, it’s a little bit different. The front plate is done, and I’ve made a good start on one side of it, and then obviously there’s a lot of weathering that needs doing.
And that’s it. In terms of painting miniatures, that is all that I’ve managed in about 4 weeks – or however long ago it was that I showed off my last piece here.
So what have I been up to instead? Holidays, job changes, computer games, life drawing, general sketching, parties, pub crawls and just general life really. It has been fun, but I’m starting to get the itch to get back to my painting again now, and that’s a good thing. I’m hoping I’ll have some time this weekend to really crack on with that side of things. But don’t think that I’ve not been creative.
I’ve been enjoying my regular life drawing sessions which have helped me come up with these… 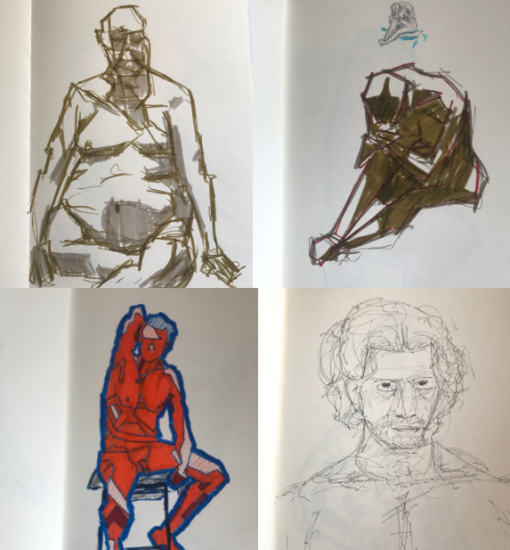 …and some illustration-style architectural sketches as well. 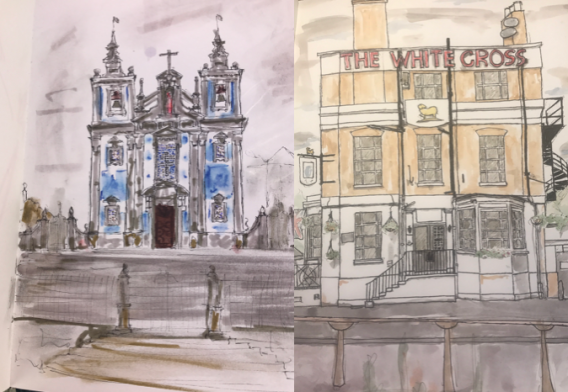 I’m now spending a lot more time sat outside, but that will quieten down as things get cooler. What’s more, I’m pretty much done with Total War: Warhammer which has been eating my time recently, and being a Mac user, the 2nd game is a long way off for me (though it is looking stonkingly good!). Once my Vampire Counts have finally crushed the last of our enemies, that’ll be the end of that for a while.
Ergo, normal service will resume soon. It’s been a pleasant short break, but it’s time to pick those paint brushes up again and get some new miniatures ready to show to you all here. Until then, I hope you’re enjoying your own hobby activities. Onwards!