Posted by johnnya10 on 14/11/2015
Posted in: My Painting and Modelling. Tagged: adeptus mechanicus, chaos, slaanesh. 6 Comments 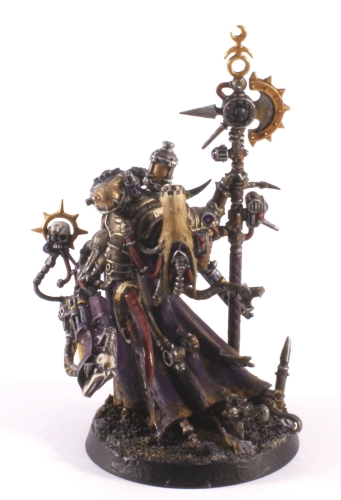 I’m back from a brief sojourn in the warp and I have brought back with me a corrupted, metal monster – a Magos of the Dark Mechanicum who has pledged himself to She Who Thirsts, Slaanesh. I’ve been spending my days and evenings playing around with converting him, experimenting with unusual metallics and weathering things like the practice is going out of fashion. And it’s been buckets of fun too.

Why do this? Well, the Dark Mech are a great bit of lore that I’ve always enjoyed, and as you may well know from previous posts, Slaanesh is my choice of dark deity. I got the idea that, when Fulgrim turned, the Mechanicum forces within his fleet would have turned with him. Enter Magos Xykog… 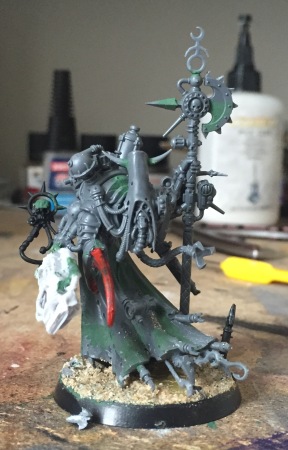 I started off by taking the Tech Priest Dominus model and immediately started hacking bits off it. The walking stick was replaced with a demonette’s claw, the weapon arm became a sonic blaster, and I added a small tail to the rear. Using parts from he hellstriders kit, I added some hooks coming out from below the robes, gave the hat some horns and added the small Slaaneshi symbol to the top of the axe. I also trimmed down the cog axe to have sharper points and I used one of the servo skulls from the Devestators kit because it has that nice eight-point star halo – very Chaosy for a Space Marine kit. Green stuff was used to close up a few gaps and add some texture. 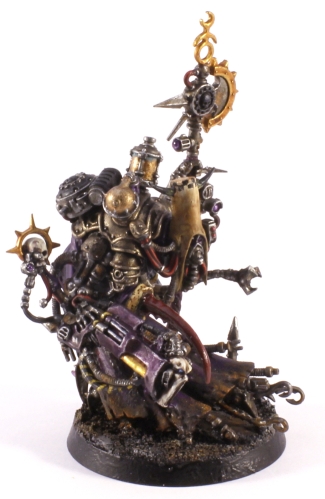 I love that head. The tall hat look may not work for me (tried it – didn’t work) but on this mini, it’s awesome. It really is like something straight out of a Blanche illustration. Because of that, I went with a muddy, grubby looking paint job and topped it off with a couple of rows of checks.

The sonic blaster fit into the model easily and having worked on the metal ones before, the finecast version was a lot more fun to paint. I gave it a coat of Leadbelcher and then a couple of coats of Druchi Violet before highlighting. FYI, this is how you paint the purple that FW use for their Emperor’s Children. 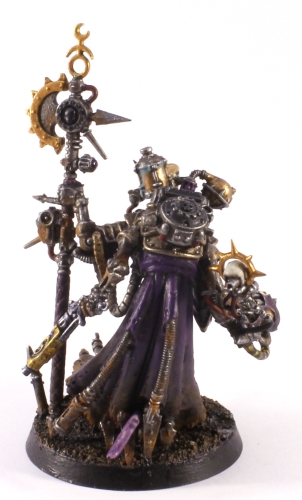 I really enjoyed painting the robes. I gave them that royal purple look – a play on the colours of Slaanesh, the Emperor’s Chidren and the Mechanicum red. When I gave them a cheetah print lining, visible on the sleeves, I was worried I was making him look a little bit too much like a space pimp, but I think I got away with it. What I really liked about them was adding the weathering around the lower threads.

I also really liked doing the brass armour which is a combination of Gehenna’s Gold and Leadbelcher, washed with Agrax Earthshade and then highlighted again. It would work great on Khorne models as well, but with me belonging to Slaanesh, I find that idea disgusting.

The revolver weapon was painted in different metals to keep it separate from the rest of the model. It’s shinier and tinted with a blue wash, whereas the rest of the silver-coloured metallics are shaded with Earthshade and a little Nuln Oil here and there. I’m really happy with the weathering all of the model which is somewhere between subtle and too much, like the sweet spot. Too much and it would be Nurgley, but not enough and he wouldn’t look like a 10,000 year old corrupted cyborg. I think I got it right. 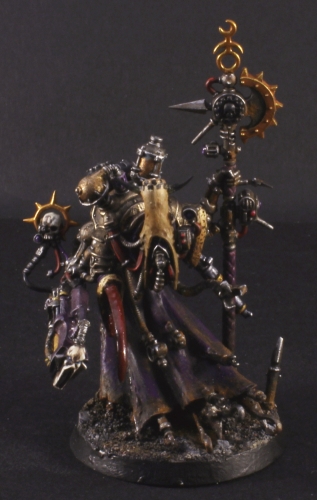 The final touch was the making sure the axe looked like a big gold-topped beat-stick because, y’know, Slaanesh.

So that’s him done then. On to what’s next. It might be more titan work, or it might be something entirely different. Who knows, right? Let’s see where the hobby wind takes me. As always, comments, questions and constructive criticism welcome below. Onwards!