Well, that was an interesting weekend. I know this is a little late now (what with this internets thing, 24 hour rolling news and whatever else the kids are into these days), but I thought I’d give you a run down of Sunday at Warhammer Fest, accompanied by plenty of pictures, a bit of gossip and probably a lot of waffle too. This is picture and word heavy, so make yourself a milky drink, sit back and enjoy.

Coventry, we hardly knew thee (and this, I think, is a good thing)

Let us first address the venue. Coventry is not a pretty town. Apart from its beautiful cathedral (destroyed during World War 2, with the ruins left as a monument and a new one built with art from some of England’s greats), it is a city of ugly, 1950s concrete (again, a legacy of WW2). It’s a central-ish location in the UK, so that makes sense, but I’m really looking forward to Warhammer World’s completed renovations. Nottingham has charm. Coventry has a general sense of greyness, disappointment and underlying threat. Mind you, for an event focussed for the most part on a grimdark distopia, it is at least fitting on that sense. And the hotel did give me enough pillows to build a little fort in my room, so that was a win. 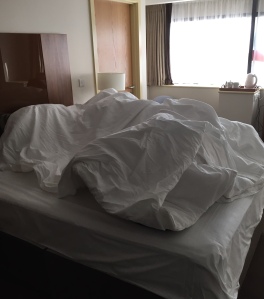 Sunday began with a passable fry-up and then a cup of coffee which had the consistency of gravy (good) and an aroma akin to the recently deceased (bad). My travelling companion, Henry South, and I stayed at the Ricoh Arena (and enjoyed the charms of the windowless hole of a casino next door to our hotel) so we could walk out after breakfast, pick up our tickets to the last Forge World Seminar of the day and then get in line for Golden Demon. And so it began.

Here are my three entries, looking all shiny in their glass cases alongside the best the hobby has to offer.

I didn’t snap any of the others (mad egotist that I am), but there was some incredible work on display so I urge you to find the pictures which will be all over the internet in any case – there’s plenty on the Eavier Metal page on Facebook. Speaking of cases, the prevailing opinion was that there was a distinctly smaller offering on show than in previous years (though I couldn’t confirm this myself of course) but the standards were still incredibly high, and it’s better to be overwhelmed by quality rather than quantity. Once everything was set in the cases, we went down to the main hall which opened up to a throng of people wanting to buy their goodies.

The first thing that caught my eye was this, the new GW app due for release in just a few weeks. I spoke to one of the guys at this stall and he informed me that we can be expecting exclusive rules, downloads, wall papers, blog articles, book excerpts and more. You can even customise it, so that it will only show you what you want to see. If you don’t care about, for example, Black Library releases, you can turn that part of the news feed off. It will initially only be available on iOS (apols to the droids) but that may well (should) change. It’s not a great revelation, but it’s nice to see GW trying to drag itself into the 21st century and I’ll definitely be downloading it.

We both had a little splurge on some grade A plastic crack, and though i won’t reveal what those purchases were, I’m very excited about what I’ll be doing Hobbywise in the near future. Hopefully, I’ve already bought some of next year’s entries!

First thing I’m going to do is show you some of the display tables from Forge World. There were three of these representing different heresy battles and they just looked so amazing. These are the sort of tables that give you ideas, that inspire you and that make you want to run home and get the paints out. Here you go…

Alpha Legion and Dark Mechanicum assault the loyalists of Mars.

Imperial Fists smash their way onto an Iron Warriors Cruiser 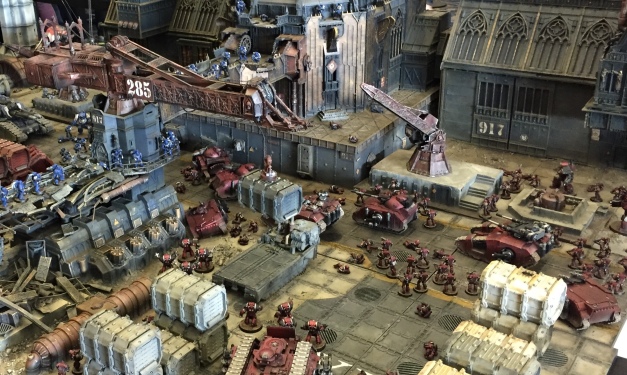 The Ultramarines and their allies take on the treacherous Word Bearers in the Calth shipyards.

They’re just so beautiful to look at. I want to be fighting battles that look like that. Huge amount of respect to not only the painters, but the guys who constructed these boards – every detail is superb. Beautiful stuff.

There was also some new plastic crack on show. I really like the look of the new Solar Auxilia armour, and Forge World are the ones who almost make me want to start a Tau army – this guy looks amazing (see below).

At this point, I popped over to check on Golden Demon again. Red stickers were being added to the minis that were photographed and green stickers got added to the minis that were selected as finalists. I am absolutely thrilled because my Mortifactors Vanguard Vets have been photographed and will hopefully be appearing in a White Dwarf or Visions sometime over the next year! I didn’t expect it, so I’m really chuffed to have had them snapped for the magazine.

But above that, I did spend a bit of time hanging around Dios Toros and heard some wonderful compliments and those really made my day. Everyone was really liking my work, and one kid even pointed out my farseer (by far my weakest entry) and was telling his dad how cool it was and that made me very proud. I heard nothing but compliments about my work so despite not placing, or getting a pin (which this year were little certificates), this made me so happy. Excellent stuff.

One regret? I should have entered Dios Toros into the Open Category. This has always been the big, scary category and yet this year, there wasn’t that much going on. There was as still some real high quality stuff of course, but Dios Toros might have had a chance of getting a picture had he been stomping around in that category instead of the very competitive 40k Vehicle cabinets. Ah well, now I know for next year. 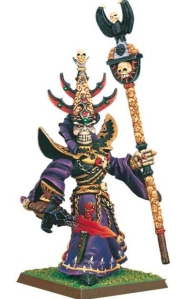 There was some really nice displays of models through the ages. With the recent rereleases of Undead, Dark Eldar and Space Hulk, there were cabinets featuring those things through the years. It’s amazing how the standards of sculpts and paint jobs have jumped up, especially when looking at the old Nagash Model compared to the imposing and amazing new one.

I also met up with some very cool people too. Henry introduced me to John Blanche who is as nice a fellow as you could ever hope to meet. He still gets inspired and excited by these sorts of events and he even showed off a couple of his brand new pieces which looked suitably Blanchitsu-esque. We also briefly met up with Garfy and Stahly from taleofpainters – both lovely chaps who both got finalist certificates for their entries. They were wearing T-Shirts with their blog logo on it – definitely stealing that idea for next year.

In fact, everyone there was nice, and it’s this sort of event that reminds you that we, as hobbyists are for the most part in excellent company when with each other. Good work, people.

Well, now. This was the highlight. This was the main event for me and it was so much awesomeness to get a sneak peak at what’s coming up. It was also great to hear Alan Bligh and Tony Cottrell answer some Qs. They’ve both got a great sense of humour and they don’t dodge the hard questions either. There was so much information (which you have probably heard already on various sites) but apparently, we got some extra gossip (because it was Sunday). here are my highlights of their upcoming releases: *SPOILERS*

• Two new Space Marine Flyers including “the biggest one we’ve done yet” (Stormbird!?)

• A new pattern of Space Marine dreadnought that’s “bigger than a Contemptor” (Is this where the Decimator comes from!?)

• The next Two HH books will revolve around smaller battles post Istvaan as the Death Guard and Sons of Horus clean up loyalists (including 30k Knights!) and the first part of Calth.

• The next primarch will be Conrad Kurze, closely followed by (slightly unconfirmed but almost certainly) his right hand man, Sevatar (double squeee!).

• Probably No 30k Xenos – Sorry aliens, this is a civil war, so there’s no place for you here.

• They might start doing scenery (particularly container crates) and corpses just because everyone keeps asking them to release them.

To show you the scope of what they’ve got to work with (and this doesn’t even include everything), here’s an image of what they’re up to and what’s left. Expect the Siege of Terra within 15 years. 😉

And, I had to share these – FW have managed not only to do the now corrupted Word Bearers justice, but they’ve managed to make the Ultramarines look awesome! Even I’d be tempted by those smurfs!! 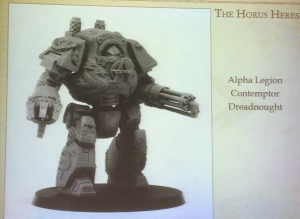 At The End Of The Day…

After that, we picked up our models from Golden Demon and headed for home. I wasn’t feeling particularly well actually, and I’m still not in fantastic shape. This means that I was completely wiped out by the end of the day, and it also means that until I’m better, this blog will be a little quieter (probably – but who knows!) for a while. Special thanks to Henry South for his company and for being a proper pal and nursing me back to health by buying me lemonade and crisps.

Would I go again next year? You bet I would. And I hope to have an even sweeter offering too – time to try for one of those finalists certificates. One thing though, I’d rather it wasn’t in Coventry. Nottingham, Birmingham or London would make more sense and would be considerably nicer. That being said, I’ll be there. it was a fun day and a good weekend – congrats to GW for putting on a more intimate event with plenty to do and enjoy.

One comment on “Warhammer Fest – My Day at Golden Demon”