Posted by johnnya10 on 26/08/2014
Posted in: My Painting and Modelling. Tagged: Mortifactors, Space Marines. Leave a comment

I realised that it has been a couple of weeks since I posted up any new pieces on here so I thought I’d share what I’m working on briefly. Not great photos but once they’re all done, I shall get the big camera out and do a proper shoot.

In truth, I haven’t really found a great deal of time to work on my hobby projects recently. Real life has been pretty busy and I’ve not been able to concentrate on my painting in a while. Work is demanding more of my attention than usual and personal life is in one of those annoyingly busy stages. What’s more, I’m tentatively trying to lose a bit of weight and get into shape too, so exercising is wiping me out some evenings.There’s plenty on my hobby plate though, including this big fella…

Yep, I’ve got him all set up and ready for undercoating (stupid rain – that was going to be done by now) and I have to say that he’s looking pretty good, even in this very much undone state. This is what you, the reader, chose for me to do next and I’m a man of my word. I actually had to do a fair bit of work to get him away from being all Death Guardy and have taken the craft knife and green stuff to quite a few places.

There are several holes/wounds on this variant Contemptor and I had to fill in one of the larger ones on the torso because, while perfect for the Death Guard, it was a little OTT for the Mortifactors.

I’ve also trimmed off the little spikes around the Death Guard icons, leaving skulls which is absolutely perfect for my chapter. I’ve also based it, building it up on one side to give it a bit more personality and a more dynamic pose. Really looking forward to getting it painted now. Oh, and speaking of weapons…

Not put together the Kheres cannons yet, but they shouldn’t be too much work. The cyclone launcher has been put together, but I’ll do all of the weapons aside from the legs/torso for ‘ease of painting’ reasons. The Contemptor was fine, but the above was plenty fiddly and a real FW classic in that respect. It does look awesome though, and sits very nicely on top of the Dread.

But that’s not all… Tactical Squad 2 Update! 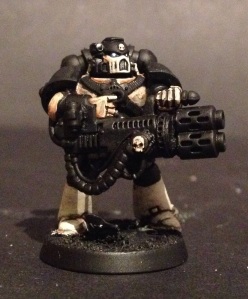 Very quick update on one member of my piecemeal project – my converted multi-melta wielding Tactical Squad Space Marine. Truth is, there aren’t enough multi-meltas going around these days, so I managed to convert one using an old tank-mounted multi-melta barrel and a Grey Knights gatling psilencer – of which I have loads going spare in the bits box. Obviously a lot more painting left to do, but I’m really happy with the conversion result and looking forward to slowly working through his squad.

So, there you go. I’m not idling or neglecting my hobby obligations, but there’s not much to show you in terms of newly completed and painted models just at the moment. As soon as I do have something finished to show you, or a worthwhile wip, you know where to come. Onwards!